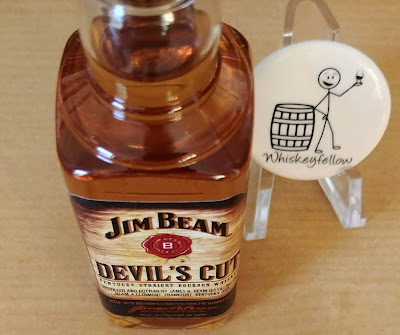 Let's get real.  You've seen the commercials. You may have even chuckled at them. If not at the commercials, then the schtick - squeezing the Bourbon from the wood after the barrel has been emptied. Yes, that's right, I'm talking about Jim Beam Devil's Cut. If you've never seen the commercial narrated by Mila Kunis, you can view it here.
But, this is a review of the whiskey, not the commercial. I've honestly been curious about Devil's Cut for several years, but I've also not wanted to pay money to taste something that is, well, schticky. But, when I saw a shooter on the shelf, I couldn't pass up the opportunity.
Devil's Cut is basically taking Jim Beam Extra-Aged (which I assume is Black Label), draining it, and then recovering the whiskey that was soaked up in the wood. The two are then blended together, then cut at 90°.  To get there, Beam started off with a mash of 75% corn, 12% rye, and 13% malted barley. The distillate was placed in new, #4 charred oak barrels at 125° and aged approximately six years (but carries no age statement). A 750ml bottle will run about $18.99.
All background aside, what really matters is if this process works, and the only way to know that for sure is to #DrinkCurious.
Appearance:  Poured neat in my Glencairn glass Devil's Cut presented as caramel in color, but that caramel was lighter than you'd assume. I don't know why, but I expected it to be much darker.  It generated a medium-thick rim on the wall which led to fat, slow legs.
Nose:  Predictably, there was a blast of wood to my nostrils. It was a mixture of wet oak and sawdust. I would not describe that as overly pleasant despite the fact I love the smell of wood. Once I was able to get past that, I found caramel, molasses, and that typical Beam peanutty goodness. Finally, the aroma of orange peel rounded things out.  When I inhaled through my lips, oak and corn rolled across my palate.
Palate:  The mouthfeel was thick and coating. For whatever reason, that was unexpected. The oak that hit the front was not. It was joined by caramel, mint, and maple syrup, which seemed appropriate considering the texture. At mid-palate, I found Beam peanuts, oiled leather, and sweet cherry. Then, on the back, flavors of brown sugar, dry oak, and cocoa powder.
Finish:  A very long-lasting finish started with heavy, dry oak and cinnamon. Then, the freight train of black pepper rumbled past that seemed unending.
Bottle, Bar, or Bust:  I like Plain Jane Jim Beam. There are many expressions from the distillery that I love. Like it or leave it, Devil's Cut is still a shtick Bourbon. The question becomes, does it work? I wasn't turned off by Devil's Cut, but I also couldn't picture myself buying a pour at a bar, let alone picking up a bottle. It was interesting, it might make for a good mixer, but my goal is never to buy something to be a mixer. I also don't think it is fair to rate this one a Bust, because despite what I just said, it wasn't bad. And, that's why the Bar rating exists.  Try this one for yourself before committing to a bottle. Cheers!
My Simple, Easy-to-Understand Rating System
Whiskeyfellow encourages you to enjoy your whiskey as you see fit but begs that you do so responsibly.
Posted by Whiskeyfellow at 6:00 AM