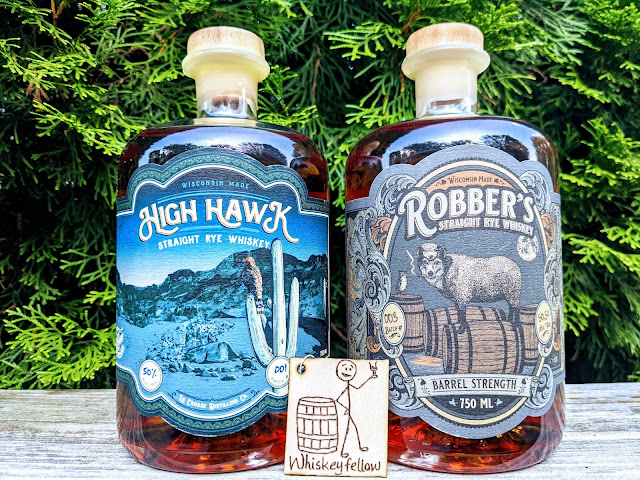 Two-and-a-half years ago, I was introduced to La Crosse Distilling Company with its High Rye Light Whiskey. It was interesting but left me somewhere between a Bar and Bottle rating. When that happens, I defer to the lower rating.

A few weeks ago, La Crosse Distilling reached out to me curious if I'd be interested in reviewing some of their straight rye whiskey. Of course, I was interested! As it turned out, there were multiple options. Part of those options came from then-defunct Death's Door Spirits, which has since been resurrected by Dancing Goat Distillery in Cambridge, Wisconsin.  La Crosse picked up some barrels from inventory, brought them back to its own warehouse, and allowed them to age.

The result created two new labels:  High Hawk and Robber's Straight Ryes. Both are three years old, both are barrel proof. Both run about $39.99 for 750ml bottles. What's the difference? I'll get to that in a moment. But, I'd like to thank La Crosse Distilling for providing me samples in exchange for no-strings-attached, honest reviews.

Up first is High Hawk, only because it of 100° which is slightly lower than the Robber's. High Hawk is a single-barrel whiskey, meant to celebrate the inaugural album of a band called, you guessed it, High Hawk. 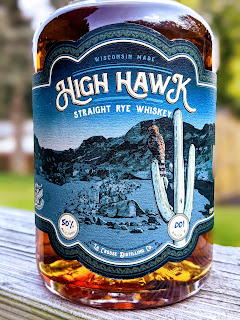 Appearance: Served neat in my Glencairn glass, High Hawk was the color of copper. It formed a medium rim that generated thick legs that raced back to the pool of liquid sunshine.

Nose: Nuts, toasted oak, vanilla, and muted fruits took some effort to pull out, which was surprising considering the stated proof. When I inhaled through my open lips, I picked out vanilla.

Palate:  A warm, oily mouthfeel greeted me as I took my first sip. The front tasted like caramel and old leather. On the middle, mint and rye spice morphed to tobacco leaf and lightly-toasted oak on the back.

Finish:  Medium in length, mint dominated. Hidden underneath were caramel, tobacco, and coffee.

Bottle, Bar, or Bust:  I would have preferred less muted flavors on the palate. This was a very soft whiskey, my guess is wheat was involved, and perhaps more significant than 5%. La Crosse says this is high-rye, and potentially anything over 51% rye would be "high rye" since there's no legal definition. But, this certainly didn't act like a "high rye" whiskey. The price is nice, the proof could be higher, but as this is barrel-proof, that's not possible. Like the Light Whiskey, I'm a bit on the fence here, and that means it takes a Bar rating.

The next whiskey was Robber's. It is a blend of four barrels of Maryland-style Rye made by Death's Door and weighs in at 101°. The backstory on this one is what you'd expect from many labels:

"Years ago we caught wind that a bunch of Wisconsin-made rye whiskey was being loaded onto a train and shipped out of state to age somewhere unknown for reasons too painful to share. We couldn't let that happen. We set out to find that train and recuse as many barrels of rye whiskey as we could. We devised a disguise and waited for the right moment to make our move. We can't tell you much more than that..."

And hence, you have the name Robber's. 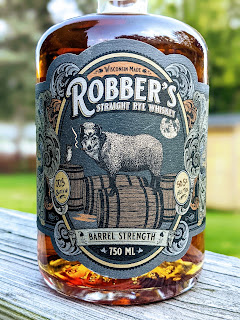 Appearance:  Poured neat in my Glencairn glass, Robber's was slightly lighter in color - very slightly. I held them up side-by-side and rotated sides to be sure. An ultra-thin rim was created, the legs were husky but slowly crawled down the wall.

Nose:  The nose was lighter than I'd expect, especially considering the proof. But I did pick out toasted oak, caramel, and sawdust. This made me wonder if smaller barrels were used. As I drew the vapor into my mouth, rye spice was obvious.

Palate:  I found the mouthfeel oily with a medium body. Toasted oak and vanilla bean were on the front. The middle presented tobacco leaf and clove. On the back, I tasted rye spice, thick caramel, and cinnamon.

Finish:  Medium-long in length, the finish gave my hard palate a tingle. Toasted oak came through, along with black pepper and rye spice.

Bottle, Bar, or Bust:  There's value here, especially considering the proof and price. Sure, it is only three years old, but Rye matures faster than Bourbon. This was flavorful and I enjoyed it. All of that adds up to a Bottle rating.

Final Thoughts: When I do multiple reviews in one post, I generally like to compare the two and see which one I like better. If I was interested in something light and easy to sip, I'd choose the High Hawk.  If, on the other hand, I desired something closer to traditional rye, Robber's would be the winner. For me, I found Robber's more appealing. Cheers!