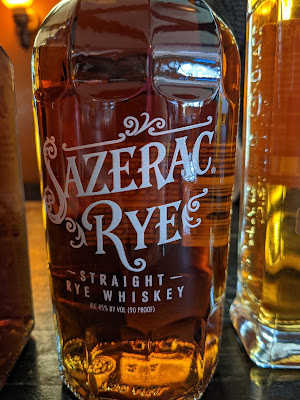 Let's get something out of the way. Sazerac has the best marketing team in the Wonderful World of Whiskey, hands down. Nobody does a better job of creating excitement and hype than they do. People will pay 10x (and higher) retail on some of their offerings (Antique Collection, anything Van Winkle, Blanton's, etc.). Even their flagship offerings (Buffalo Trace) seem to fly off the shelves like it is something truly special.

Mind you, I'm not badmouthing Sazerac at all. I enjoy much of what Buffalo Trace and 1792 Barton put out there. I'm simply saying there are several where I'm left scratching my head wondering what folks are doing for average whiskeys and there's no other answer than they want to like it because of the hype.

Today's review is Sazerac Straight Rye Whiskey, lovingly called Baby Saz by its fans. They call it Baby Saz because part of the Antique Collection is Sazerac Rye, which I guess is Big Daddy Saz. It starts with Buffalo Trace's low-rye rye mashbill, rumored to be barely legal (meaning, at or about 51% rye content). As a straight whiskey, it is at least two years old. As a non-age-stated whiskey, it must be at least four years old. In the not too distant past, it carried a six-year age statement. Packaged at 90°, you can expect to pay about $29.00 for a 750ml bottle of Baby Saz unless you live in an area where it becomes more difficult to find. Then things, like anything else Buffalo Trace, get crazy.

I sampled a pour of Baby Saz at a local watering hole here called The Malt House. Time to #DrinkCurious and discover what this is all about.

Appearance:   Poured neat in my Glencairn glass (yes, I brought my own as The Malt House serves in rocks glasses), Baby Saz presented as a brassy amber. It created a medium rim that formed fast legs.
Nose:  Citrus and berries started things off, followed by aromas of oak, clove, and black pepper. When I inhaled through my lips, vanilla took a stroll across my palate.
Palate:  A thin, oily mouthfeel led to flavors of cinnamon, vanilla, and caramel on the front. Mid-palate featured plum, raisin, and anise. Mint, oak, and clove closed things up on the back.
Finish:  Medium in length, the finish offered black pepper, cinnamon, and rye spice before moving to vanilla, oak, and anise.
Bottle, Bar, or Bust:  Baby Saz is decent, but it isn't the end-all-and-be-all of ryes. It is a pretty good value for $29.00 but I'd not pay more than that. It is absolutely over-hyped and frankly, it could get lost amongst other barely legal ryes such as Old Forester and Rittenhouse, both at higher proof and much easier to get your hands on. I'll give it a Bar rating if you find this above retail, but if you've got a bottle sitting on a store shelf for under $30, go ahead and grab it.  Cheers!

My Simple, Easy to Understand Rating System
Whiskeyfellow encourages you to enjoy your whiskey as you see fit but begs you do so responsibly.
Posted by Whiskeyfellow at 6:00 AM