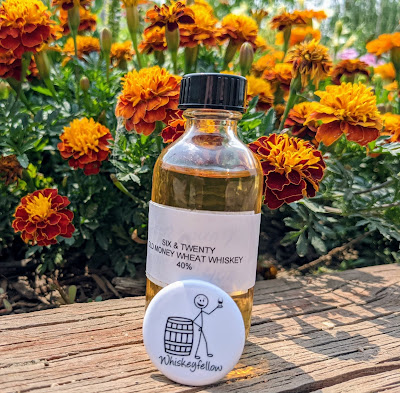 "In the 1700s, there was this Choctaw maiden named Issaqueena who fell in love with an English trader, Alan Francis. Shortly after Issaqueena was captured by the Cherokee, she learned of a plan to raid, massacre and loot Francis' trading post.
Wanting to warn him, Issaqueena escapes. On a swift pony she takes off down what we now know of as the Issaqueena Trail. Along the way, she names landmarks that we still use today based on the distance from the village. This is why we have the town of Six Mile, Mile Creek, Twelve Mile Creek, Eighteen Mile Creek, Three and Twenty River, Six and Twenty Creek. She does this for nearly 96 miles in order to warn her lover and so names the town of Ninety Six." - Six & Twenty Distillery

Founded in 2011 by David Raad, this microdistillery is a grain-to-glass operation that utilizes only local, organic grains and does everything on-site in a 6000 square foot former milk packaging facility. It offers what it calls a Core of Four:  Old Money Whiskey, 5-Grain Bourbon, Carolina Cream, and Heirloom Rye Vodka.  Six & Twenty has the occasional limited-run offering. But, today, I'm reviewing Old Money Whiskey.
Old Money is a wheat whiskey. Raad's goal was to create a whiskey that his wife would enjoy sipping. It starts with soft winter wheat and barley, but the percentages are undisclosed. It is then distilled and aged in new, charred oak barrels for three years. Once dumped, Old Money is packaged at 80°. You can expect to spend about $37.99 of your new money on a 750ml bottle.
I'd like to thank a friend for providing me a sample of Old Money to review. And so, with that, it is time to #DrinkCurious.

Appearance:  Poured neat in my Glencairn glass, Old Money presented as a dull gold color. There was an amazingly fat rim that generated husky, wavy legs that dropped back to the pool.

Nose:  The first aroma I picked out was melba toast. Beyond that, I discovered wheat, light citrus, sawdust, and a floral quality. When I took the vapor into my mouth, vanilla and banana rolled across my tongue.

Palate:  The mouthfeel was thin and warm, which isn't so unusual for a wheat whiskey but is for something at 80°. The palate was uncomplicated with dark chocolate and oak on the front and maple at the middle. The back offered white pepper and oak.

Finish:  Long, long, long.  Like old money itself, this finish stuck around. Raisin, oak, and white pepper were evident.

Bottle, Bar, or Bust:  Wheat whiskeys are a funky bunch with me. I don't dislike them, yet I also don't gravitate to them, either. I was admittedly surprised by the warm mouthfeel, especially for this low of a proof. Old Money was an easy sipper and something I could see myself enjoying on a hot summer's day. That by itself makes this a winner, and when you add in the price, that's just the cherry on top. Old Money takes a Bottle rating. Cheers!