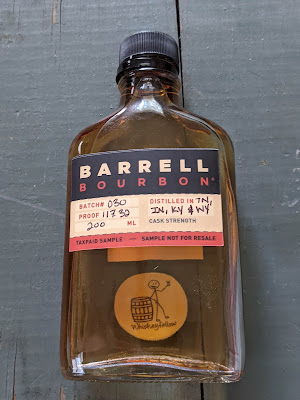 I've reviewed several whiskeys from Barrell Craft Spirits. Most of them have been Bottle ratings. A handful have been Bar and there was even a Bust.  And, good or bad, whenever Barrell tells me it is sending a sample my way, I get excited because, well, they're usually tasty.

The most recent one to come my way is Bourbon Batch #030.  This one is absolutely different because it contains a component I've not yet seen in the prior releases:  Bourbon from a Wyoming distillery.

One of the fun things about Barrell is they're very transparent about some things, and other tidbits they give you just enough information to almost figure it out on your own. For example, here's the make-up of Batch #030:

Obviously, Barrell isn't providing the sources of those whiskeys, but some simple deductions will give away much of the information.  The Indiana content is MGP. I know this because I've been reviewing Barrell offerings for a few years and the ages make it obvious. Also, I'm not aware of any other Indiana-based distilleries that can provide the volume required. The same is true with the Tennessee portion: George Dickel. What's more challenging are the last two components.
I suspect the Kentucky component is Jim Beam because that's been used in a previous batch. A portion of the Kentucky Bourbons used are described as nutty.  It doesn't mean that it is Beam, but it is because Beam is known for nutty Bourbons and you don't stop working with a partner unless there's a reason to stop. The Wyoming component requires some additional research.
Taking into account production volume and founding dates, the only Wyoming distillery that makes sense is Wyoming Whiskey. It is the oldest legal post-Prohibition distillery in the state when it was established in 2009. And, that would certainly take into account the possibility of the 15-year portion.
The detective work is fun, at least it is to me. But I know what matters to everyone is what's in the bottle. Both the Kentucky and Wyoming Bourbons are wheaters (or wheated, meaning the 2nd-largest ingredient is wheat instead of the typical rye). The wheaters mingled together for a month separately from the traditional (which also mingled together), until both were married into a single batch. Batch #030 is packaged at a cask strength of 117.32° and retails right around $90.00.

I'd like to thank Barrell Craft Spirits for the sample in exchange for a no-strings-attached, honest review. Time to #DrinkCurious and taste if this is a winner.

Appearance:  Poured neat in my Glencairn glass, Batch #030 presented as mahogany in color. It formed a medium ring that yielded legs that raced back to the pool of liquid sunshine.

Nose:  Sweet aromas wafted to my nostrils. It started with peach and flowers, apple, and, finally, sweet tobacco. The familiar mineral quality of Dickel popped up as well. When I breathed the air into my mouth, coconut gave me a bit of a surprise.

Palate:  Thin and oily in my mouth, the front started with dark chocolate and orange citrus. As it moved to the middle, I tasted cocoa, coconut, pear, and walnut. The back offered flavors of clove, oak, and English toffee.

Finish:  A medium-length finish featured clove, black pepper, and raw honey. That was Act 1. There was a brief intermission, and then Act 2 began. This time, it was long and lingering, with English toffee, dark chocolate, old leather, and cinnamon.

Bottle, Bar, or Bust:  The finish was just amazing. I love when different (or weird) happens and this was that. The marriage of six barrels from four distilleries was a successful one. Blending is an art form, and this was a masterpiece. Bottle rating all the way, it is well worth the outlay. Cheers!