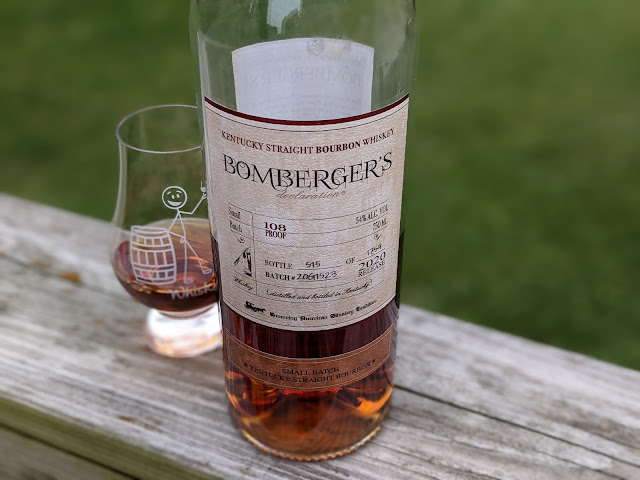 Back in 1789, Elijah Craig allegedly invented Bourbon. But, before that, in 1753 Pennsylvania, Mennonite brothers John and Michael Shenk founded a distillery on Snitzel Creek near what is present-day Schaefferstown. The Shenks grew corn and rye, mashed and distilled it for what was then "mass" consumption. It remained family-owned until 1860, when Abraham Bomberger purchased it. Theoretically, it remained in the family, as Bomberger was related to the Shenks. However, he did change the name to Abraham Bomberger & Sons. Then, when Abraham passed away, the distillery was renamed H.H. Bomberger.

"The 2020 release of Bomberger's is a flavorful Kentucky Straight Bourbon with a distinctively smooth character that defies its 108 proof strength. For the aging of this release, Master of Maturation Andrea Wilson chose barrels made of special wood that has been naturally air-dried for over 3 years. While some Chinquapin (Quercus muehlenbergii) oak barrels were used in the 2019 Release of Bomberger's, this year our production team opted to increase the proportion of the Bourbon that spent time in the Chinquapin oak. This special cooperage elevates the unique attributes of this wonderful Kentucky Straight Bourbon." - Michter's

If you have no idea what Chinquapin is, don't fret. Neither did I. As it turns out, that's a subspecies of American white oak.

Bomberger's Declaration carries no age statement, and Michter's usually holds mashbills close to its vest. There were 1759 bottles released, with each one priced in the neighborhood of $90.00 which, considering all things, is probably at the low end of retail these days. I was gifted a bottle from a friend, and the batch number is 20G1523.

I will say that I've tried on a handful of occasions to procure a bottle of Bomberger's, and the closest I've ever come was a bottle of Shenk's Homestead (which I won't complain about). As such, you can imagine how interested I was to #DrinkCurious and discover if my desire was justified.

Appearance:  Poured neat in my Glencairn glass, Bomberger's Declaration was the color of deep mahogany. The rim it formed was husky, and that produced fat, slow legs that crawled back to the pool of whiskey.

Nose:  Interestingly enough, Mrs. Whiskeyfellow informed me that, while across the room, she could smell the aroma. I found a blast of black cherry, cinnamon, honey, and toasted oak. When I sucked the air into my mouth, it was like black cherry ice cream.

Palate:  I encountered an oily, warm mouthfeel. There was no burning sensation, but it did wake my tongue and hard palate. Speaking of a palate, the front featured cherry, vanilla, and orange marmalade. As it shifted to the middle, I tasted walnut, pecan praline, and maple syrup.  The back offered dark chocolate, clove, and tobacco leaf.

Finish:  The taste of plum, cherry, dark chocolate, tobacco, and clove were long-lasting on my throat. It eventually faded, but it was in no rush.

Bottle, Bar, or Bust:  First of all, no one would ever guess this was 108°. It drank at least 10 points less. I relished the fruity flavors. I savored the milder spice notes. I have no clue if that's due to the Chinquapin oak because I've never (to my knowledge) tasted whiskey aged in it before. But, the end result is that I simply loved this Bourbon. Would I spend $90.00 on it? Sure. Would I pay double that? No. But, if you can find this one between $90.00 and, say, $130.00 or so, my recommendation would be to jump at the chance. I don't need to say this, but Bomberger's Declaration 2020 vintage bodyslams the Bottle rating. Cheers!