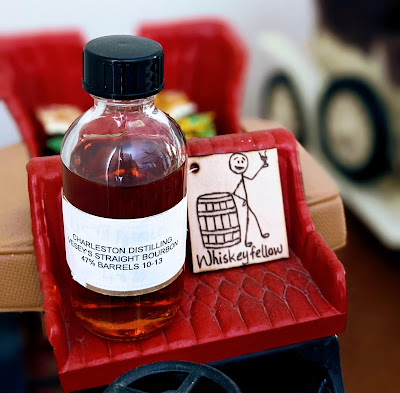 Getting introduced to new distilleries is intoxicating.  Stepping into the unknown is like one, giant blind tasting. You don't know what to expect, except perhaps the style of whiskey offered. But, there's also the learning about what the distillery is all about, what its goals are, and how it works to achieve them.

One of the ways I learn about new distilleries is via friends who are curious what my opinion is of something they come across. You can imagine how pleased I was to receive a sample bottle of this previously-unknown elixir. What I'm talking about is Charleston Distilling Co. out of Johnstown Island, South Carolina. Founded December 31, 2013, by Stephen Heilman, his philosophy was to do something different. It was to "master the old practice, but refine and redefine."

Charleson Distilling utilizes two German copper stills and gets all of his grains from nearby Weather's Farm. Nothing is outsourced - this is a true grain-to-glass distillery. The warehouse is naturally-acclimated.

I'm drinking Vesey's Straight Bourbon from barrel 10-13.  It begins as a mash of 70% corn, 20% winter wheat, and 10% rye.  You'll notice there's no malted barley in that mix. Fermentation takes between three and five days, and then once distilled, it is aged four years in an undisclosed cooperage. Once dumped, it is diluted to 94°. You can expect to pay about $48.99 for a 750ml.

Let's #DrinkCurious and learn what this Bourbon is all about, shall we?

Appearance:  Poured neat in my Glencairn glass, Vesey's presents as a deep mahogany color. This made me curious if smaller cooperage was used for aging. It made a thin rim but huge, fat, watery legs that fell back to the pool of liquid sunshine.

Nose:  This Bourbon was fragrant from the start. Cherry and plum filled the air before the glass got anywhere near my face. It was joined by toffee and cedar. When I drew the vapor into my mouth, the toffee continued.

Palate:  The mouthfeel was soft and airy. On the front, I tasted dark coffee and barrel char. The middle offered flavors of caramel and cedar. The back was big oak, leather, and cinnamon spice.

Bottle, Bar, or Bust:  I honestly have no idea what size barrels were used but from my experience, it seems like they had to be less than 53-gallons. While the nose wasn't oaky, the palate and finish were. I do commend Heilman for going with rye over barley for the final ingredient in the mash. The wheat also helped to round out some of the strong oak presence. The proof on Vesey's seems correct, and $49.00 is relatively average for craft, especially true craft whiskey. But, I'm stuck somewhere between Bar and Bottle on my rating, and when that happens, I err on the side of caution. As such, it takes a Bar, and I'll recommend trying this one first before making a purchase. Cheers! 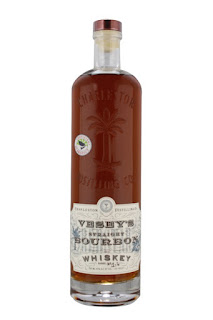