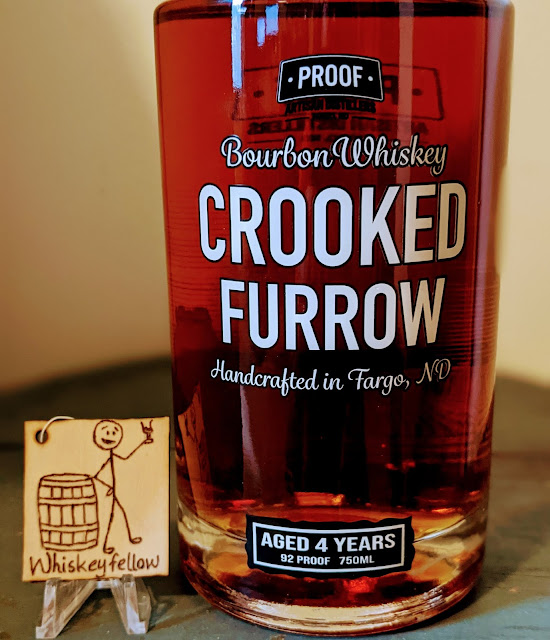 Did you know that North Dakota distills whiskey? I suppose I did since Bourbon is made in all 50 states, but when I think Bourbon, North Dakota doesn't even register on my radar.
The first legal distillery in the state was founded by brothers Jay and Joel Kath. They chose Fargo and named it Proof Artisan Distillers. The Kaths started in 2015 with potato vodka because, well, potatoes are easy to grow in North Dakota. They moved into other spirits, including whiskeys. Bourbon was one of those whiskeys, and the Bourbon line took on the name Crooked Furrow. Why Crooked Furrow?

"The name Crooked Furrow comes from furrows that are created when you plant corn.  But, Grandpa always said, 'Corn grows better in a crooked furrow.' That's because a crooked furrow is longer than a straight one. In reality, he just drove crooked." - Joel Kath

My review today is of Crooked Furrow Four-Year Straight Bourbon. The mash is non-GMO corn and barley grown in North Dakota. That's the whole mashbill, with an 80/20 ratio. There is no third ingredient. It is run through the Arnold Holstein still, then placed in #4-charred oak, double-toasted 53-gallon barrels from Independent Stave Company.
Proof Artisan Distillers then does something I've never heard of before. With most distilleries, proofing down is done by dumping the barrel and then adding water. But, in the case of this specific Bourbon, proofing is done inside the barrel. That means after the angels take their fair share, water is added to the desired proof. This is done over a period of time that begins one year in advance of dumping, with the goal to not dilute more than a couple of points in the last few months. Proof Artisan Distillers calls it bottle-proof, and as Joel Kath told me, this whole process is called conditioning. Conditioning continues when the whiskey is then transferred to conditioning tanks, where it is subjected to oxidation to bring out even more flavor.
Joel says he is a student and admirer of Hubert Germain-Robin, who suggested the whiskey is alive while in the barrel, and conditioning keeps the flavors intact.
When all is said and done, the conditioning to the Four-Year Bourbon results in a bottle proofing of 92°. You can expect to pay about $55.00 for a 750ml bottle. Proof Artisan Distillers' product is currently sold in Arizona, Illinois, Minnesota, and North Dakota, but Joel indicated they're currently expanding to other markets.
A friend provided me with a sample of Crooked Farrow for review purposes. Now, it is time to #DrinkCurious and learn more.
Appearance:  Served neat in my Glencairn glass, Crooked Farrow presented as chestnut in color. It formed a medium-thin rim that generated long, watery legs to fall back to the pool of Bourbon.

Nose:  I could smell the cherry syrup from across the room while I was allowing it to breathe. The aroma became more pronounced as I brought it to my face, and that was joined by butterscotch, caramel, and a slightly musty quality. When I inhaled through my mouth, toasted oak crawled across my tongue.

Palate:  Patience is a virtue. I found the mouthfeel to be light-bodied and warm. On the front of my palate, I picked out caramel, brown sugar, corn, and a bit of char. As it moved to the middle, I tasted almond and cocoa powder. The back consisted of clove, weathered leather, and dry oak.

Finish:  The first sip was deceptively short. The next sip gave me a long, lingering, and dry finish. It featured clove, tobacco leaf, leather, and dry oak.

Bottle, Bar, or Bust:  If you thumbed your nose at this whiskey because it came from Fargo, you'd do yourself a disservice. This was a fun experience. The longer I allowed it to oxidize, the better and more complex it became. By the end, I found myself pouring another neat pour, looking for what might come next. The price is about average for craft Bourbon, it is properly proofed, and I'm happy to award it a Bottle rating. Watch for this on your store shelf, and be patient with it. You'll be pleased with this Bourbon. Cheers!