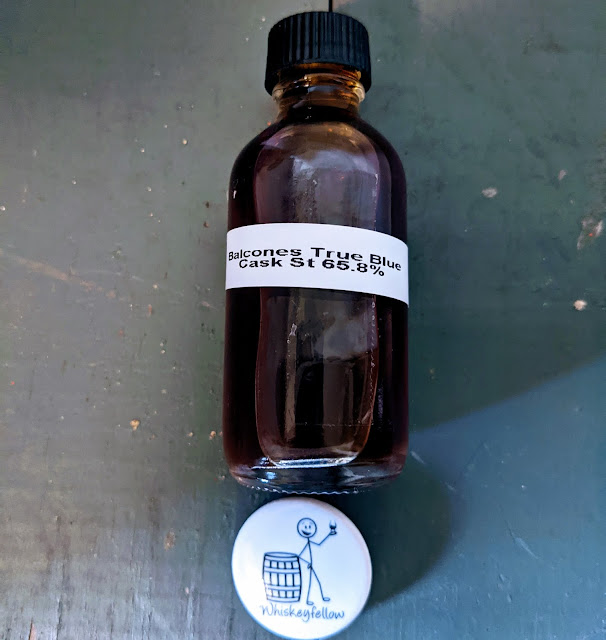 Texas whiskey. It is about as polarizing a whiskey category as it gets. I can tell you that until a year ago, I wasn't a fan at all of it. I found it hot, one-or-two notes (oak and corn or corn and oak), and pricey, especially for the return on investment.

As I was saying, a year ago I found one that changed my mind and allowed me to #DrinkCurious with less fear. I still find fault in many Texas offerings, but I'm keeping the door open to discover hidden gems. If you're interested, it was The Musician from Still Austin.

One of the reasons Texas whiskey is, well, unappealing is everything ages there so quickly due to the heat. It can, as we saw this past February, get pretty darned cold there, too. But, mostly it is hot. And, many distilleries choose to age in smaller barrels, making the corn and oak, oak and corn dominance even stronger.

Today I'm sipping on another Texas whiskey. This time, it is from Balcones Distilling out of Waco. Balcones is a grain-to-glass distillery, using blue corn from New Mexico and barley from Texas. Founded in 2008 in an old welding shop, operations were up and running a year later. It utilizes copper pot stills. Then, in 2016, it opened a new distillery in a former storage building which was many more times the size of the original. Jared Himstedt, Balcones' Head Distiller, was a homebrewer before joining the team at Balcones from its inception.

"At barrel proof, True Blue Cask Strength preserves the bold flavors and aromas straight from our premium barrels. Select casks yield a power expression of our blue corn whisky that opens with deep notes of brown sugar, roasted nuts and buttered toast, while lingering honeysuckle and citrus accents usher in a long finish with hints of cinnamon. Crafted from scratch at Balcones, and held to the highest standards of quality, this whisky can be enjoyed “as is” or with as much water as you prefer." - Balcones Distilling

The cask strength True Blue Straight Corn Whiskey is a once-a-year, single-barrel product made from roasted blue corn, and aged 41 months in vintage, American cooperage. The barrel size and source are undisclosed. It is non-chill filtered and naturally colored.  The 2021 version is a whopping 65.8% ABV (or 131.6°), and if you can find it, you'll pay about $64.99. 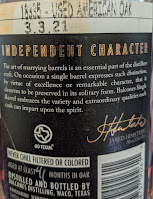 A local distributor provided me with a sample of True Blue in exchange for a no-strings-attached, honest review. I won't make him wait any further.

Appearance:  Served neat in my Glencairn glass, True Blue may be the reddest mahogany color I've seen, and I include whiskeys that have been aged in red wine casks. It formed a medium-width rim that made a slow curtain collapse back to the pool.

Nose:  Plain and simple, this starts as a caramel bomb. Additional aromas included banana pudding, vanilla, cinnamon, and toasted oak. When I drew the vapor into my mouth, sweet corn raced across my tongue.

Palate:  Warm and oily, the mouthfeel told me this whiskey was not fooling around. Praline pecan and vanilla cream greeted the front of my palate. That changed to heavy maple syrup on the middle. The back was an interesting blend of cinnamon, clove, and butterscotch.

Finish: Texas is big, and so is True Blue's finish. It started sweet with honey and maple syrup, then moved to spicy with cinnamon, coffee, and clove.

Bottle, Bar, or Bust: While the mouthfeel told me it was very serious, True Blue didn't drink at its stated proof. Look 130° and more is going to get your attention. It will always do so. But, there are some that are like drinking napalm and others that are shockingly smooth (yeah, I know, that's a frowned-upon term in the whiskey world). True Blue may also be the best Texas whiskey I've had to date. The wow factor was surprising. There was nothing about it that I disliked, and I would absolutely buy a Bottle at $64.99. You should, too. Cheers!