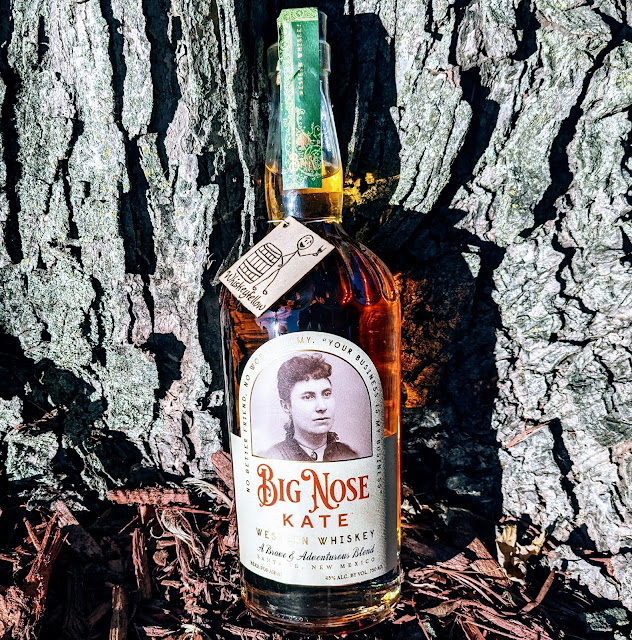 I love new-to-market brands. There’s the thrill of the discovery, where no one has put together an opinion yet, and it is all untouched territory. One such brand is Big Nose Kate.

“The old woman was in a familiar town. She and her lover had lived in Prescott, Arizona Territory, back in 1879-’80 […] Her lover—she called him her husband—got into some difficulties with a group of cowboys in Tombstone in 1880. On a cold October day in 1881, a cowboy named Ike came into their room at a boardinghouse, looking for her man—Doc. A little while later, Doc and three of his friends (named Earp) had a shootout with the cowboys in the empty lot next to the boardinghouse. And she watched. And she consoled a weeping Doc after the fight.” – Mark Boardman, True West Magazine

So, yeah, Doc Holliday, Wyatt Earp, and the Battle at the OK Corral! The interesting thing about Mary Kate Elder Cummings, a/k/a Big Nose Kate, is that no one could really verify her story. But, they were afraid to cross her. There are even disputes about her nickname, but some accept “Big Nose” referred not to a physical feature, rather, it was that she stuck her “big nose” in everything.

Big Nose Kate bills itself as a Western Whiskey, “A Brave and Adventurous Blend” which is produced by Big Nose Brands. It takes rye and malt whiskeys sourced from Indiana, Texas, and Virginia and puts it all together in Santa Fe, New Mexico. It isn’t that difficult to figure out which distilleries provided the whiskeys, but Big Nose Brands requested they remain undisclosed, and I’m happy to honor that.

The complete mashbill is 52.4% rye and 47.6% malted barley. The rye grains are a combination of Elbon, Winter, Chocolate, Merced, and Crystal. The barley is Pale, Odyssey, and 2-row distiller’s malt.

The cooperage used was a blend as well. Some aged in 53-gallon, new charred oak for 40 months, another aged 38 months in vintage Bourbon barrels, and the last in STR sherry casks for 57 months. Big Nose Kate carries no age statement, which in this case would be completely unnecessary anyway. A 750ml bottle retails for $38.99 and you can hit up the website to get one.

I’d like to thank the Big Nose Kate team for providing me a sample of this Western Whiskey in exchange for a no-strings-attached, honest review. Let’s #DrinkCurious and learn what this is all about.

Appearance:  Poured neat in my Glencairn glass, Big Nose Kate presented as the color of a pale ale. It formed a massive rim that couldn’t begin to hold the legs that collapsed under their own weight.

Nose:  The aroma of unpicked mint stood out among the others, which included caramel, new leather, and heavy malt. When I drew the air into my mouth, dry sherry came in, parked, and refused to leave.

Palate:  A thick, syrupy mouthfeel led to notes of caramel, orange zest, and grenadine on the front of my palate. The middle featured chocolate and nutmeg, while the back offered old leather, dried tobacco, and oak.

Finish:  This was one of those hard-to-nail-down finishes. The first sip resulted in a very short finish. Each time I took another sip, the length grew exponentially. After the fourth, it just wouldn’t quit. It began with orange peel and cocoa, then smoked oak, then dry sherry and leather, and finally cinnamon spice.

Bottle, Bar, or Bust:  Big Nose Kate is a fun whiskey, and I don’t think I’ve given that descriptor before to anything. From the nosing that wouldn’t end to the layered palate, to that crazy finish, I couldn’t help but smile the whole way through. While it won’t blow your mind, it will keep your attention, and I believe at the end of the glass, you’ll come to the same conclusion I have: Big Nose Kate is worth picking up, and as such, takes my Bottle rating. Cheers!