Celebrity whiskeys. They’re all the rage now. It doesn’t matter if they’re athletes, actors, singers, or whatever. Dead or alive, these famous names are making headway in the industry.

You would think that with all the fame, fortune, and fondness fans have with celebrities, what they’d attach their names to would be excellent. More often than not, that’s an exception to the rule. Many are mediocre. Some are just awful. And, every one that comes to mind includes a celebrity price tag to boot.

When Elvis Presley Enterprises, representing the brand of the King of Rock and Roll, does something, you’d hope it would do right by him.  And, today, we’re going to put that to the test. In partnership with Grain & Barrel Spirits (the producer of Chicken Cock and Virgil Kane whiskeys) Elvis Presley Enterprises brings us (you guessed it), Elvis Whiskey.

There is more transparency with Elvis Whiskey than I’d have guessed. Some of it is purposeful, some of it may be accidental. Regardless, pieces of the puzzle were easy to put together, and I’m highly appreciative and applaud brands that do this, particularly when they’re not doing any actual distilling. 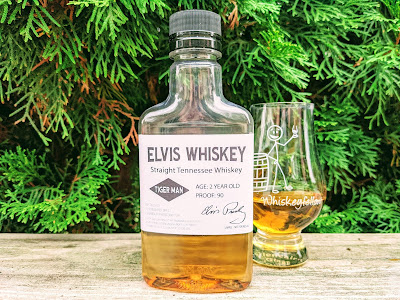 I know what you’re thinking, and I’m going to tell you to just shush.  This is not sourced from George Dickel. Instead, it comes from DSP-TN-21029, which belongs to Tennessee Distilling Company. Who is that? It distills for Heaven’s Door, Kirkland (Costco), and other partners, including Grain & Barrel Spirits.

Elvis Whiskey calls this release Tiger Man. Tiger Man was the record with songs from his second comeback concert in 1968 and included such titles as Heartbreak Hotel, That’s All Right, Blue Suede Shoes, and Tiger Man. It begins with a mash of 80% corn, 10% rye, and 10% malted barley. It then rested two years before being bottled at 90°. The cooperage is undisclosed, and you can expect to pay about $49.99 for a 750ml package.

The big question, of course, is Is this whiskey fit to be named for a king? The only way to know for sure is to #DrinkCurious.

Appearance:  Poured neat in my Glencairn glass, Tiger Man looked the color of polished brass. It created a thicker rim on the wall which released husky legs that slid back to the pool.

Nose: There was a gentle bouquet of sweet corn, vanilla cream, baked apple, nutmeg, and toasted oak. When I took the air into my mouth, I picked out candy corn.

Palate:  The mouthfeel was buttery. The front of my palate immediately honed in on maple syrup, which was accompanied by vanilla and crème fresh. The middle offered pear, green apple, and brown sugar. On the back, I tasted more caramel, toasted oak, nutmeg, and orange peel.

Bottle, Bar, or Bust:  I was half-hoping that I’d pick up notes of a peanut butter and banana sandwich. That didn’t happen. This is one of the sweeter Tennessee Whiskeys I’ve encountered. There was no Dickel “Flintstone’s vitamin” quality, which pleased me. In fact, pleasing is an excellent descriptor.  Tiger Man was a very easy sipper, with enough flavor to keep things interesting, and a finish that wouldn’t quit. Thankfully, this is one of the better celebrity whiskeys on the market and I’m happy to crown it with my Bottle rating. 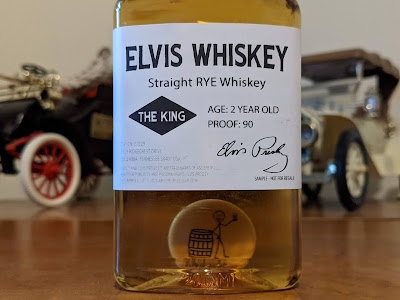 Appearance:  Served neat in my Glencairn glass, The King was, again, the color of polished brass. It created a medium rim on the wall yielded sticky droplets that crawled back to the pool.

Nose: Strangely enough, the first note I experienced was… corn? There is no corn in the mashbill! That was followed by grass, floral rye, mint, and orange peel. When I drew the aroma into my mouth, I found mint.

Palate:  A medium-weight, silky mouthfeel greeted my tongue. Rye bread and caramel started things off. The middle suggested cocoa powder and toffee. The back is when things became interesting and more rye-like – I tasted dry oak, clove, rye spice, and sweet tobacco leaf.

Finish:  Here’s the crazy thing. The finish was like a Plummet ride. It built up and immediately dropped. Cocoa, rye spice, clove, and old leather flavors meshed well together, it just took several sips to catch what was there.

Bottle, Bar, or Bust:  No peanut butter and banana sandwich here, either. Selecting 90° on this was an interesting choice. I’ve become so used to cask-strength MGP rye that I’ve missed what a proofed-down one tasted like. In this case, I believe Elvis Whiskey may have been a little heavy-handed with the water. The front and middle parts of the palate were simplistic. The back is where the hip-gyrations came into play. Just like Fountain of Love, The King gets lost among other whiskeys. As such, this one takes my Bar rating.