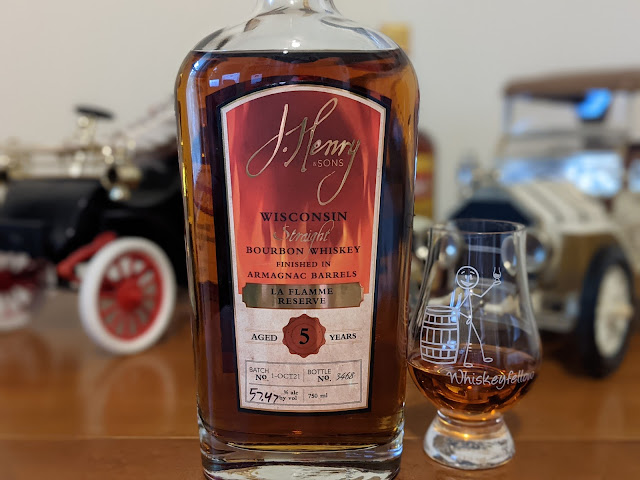 I’m going to start with some disclosures right out of the gate. When J. Henry & Sons Wisconsin Straight Bourbon hit the market, I was the first reviewer to write about it (that I’m aware of).  The Henry Farm, located in Dane, is about a half-hour drive from me. Mrs. Whiskeyfellow and I have become friends with the Henry clan, and we’ve been cheerleaders for them over the years. I helped pick a private barrel of Patton Road Reserve a few years ago. I’ve even been a pour bunny for the Henrys when they needed someone to run a table at a public show.

My point is, with the Henrys, I have my biases. But, that doesn’t mean I can’t write about their whiskey, give you some background, and tell you what the tasting notes are of its newest release, La Flamme Reserve. And, as you’ve seen in previous reviews, I’ve panned friends’ whiskeys before when they don’t meet my standards. Honest reviews are just that. My distiller friends expect and understand that they are neither immune nor given a pass.

The Henrys contract-distill with 45th Parallel Distillery up in New Richmond, Wisconsin. All 45th does is the distilling. The mashbill of their four-grain Bourbon is 60% corn, 14% rye, 14% wheat, and 12% malted barley. The Henrys grow their own, proprietary red heirloom corn, which was a 1930’s strain resurrected by the University of Wisconsin and grown by patriarch Joe Henry. Joe also grows the rye and wheat used in the mash. Only the barley is sourced, and 45th doesn’t use the Henry’s grains in any other products.

La Flamme Reserve is Patton Road Reserve finished in ex-Armagnac casks. It was aged five years in the farm’s former dairy-barn-turned-rickhouse and subjected to our brutal winters and hot, humid summers. The Henrys team up with Nancy “The Nose” Fraley to make sure things are just right.

Appearance:  Served neat in my Glencairn glass, La Flamme Reserve was a fiery orange-reddish amber. A thin rim led to husky, heavy legs that crashed back into the pool of liquid sunshine.

Nose:  I let this whiskey sit for several minutes before bringing it to my face. Thick caramel was the first aroma I found, which was joined by raisin, plum, roasted nuts, and toasted oak. When I brought the air into my mouth, it was dry with pear and oak.

Palate:  The mouthfeel was hot!  The mistake would be to stop here and give up due to the palate shock (and that goes with any whiskey – never judge on the first sip). It made my lips tingle. It made my throat warm. The second sip was oily and full-bodied. The fire went away. Flavors of caramel, plum, raisin, and brown sugar were on the front of the palate, just like the nose. The middle offered more dark fruit and maple syrup, and the back gave up leather, clove, roasted nuts, and old oak.

Finish: Very warm, long, dry, and unending, the finish featured notes of sticky caramel, dark fruits, roasted nuts, and the old oak from the palate became damned ancient. There was a recurring clove flavor that would fall off and come back. And, while the clove was cycling out, dark chocolate would tango with it. That was unique. It left my hard palate sizzling but didn’t have the same effect on my pharynx. I tried timing it, but that in-and-out clove kept throwing me off.

With Water:  I promised Joe Jr. (one-half of the & Sons) that I would review this one both neat and with a couple of drops of distilled water. Who am I to renege? I do get pretty Type-A about adding water – I always use an eyedropper and measure out two drops. That should be enough to change things up without over-diluting the whiskey.

Bottle, Bar, or Bust:  I disclosed my bias at the start. I’ll tell you that I loved La Flamme Reserve. I’ll tell you that despite the “fiery” mouthfeel, the proof on this sneaks up on you and batters you across the chin with a 2x4 (you’ll want a designated driver if you’re not at home). I’ll tell you that I bought a Bottle for my whiskey library after sampling this at the J. Henry & Sons tasting room. And, that’s my rating. Cheers!