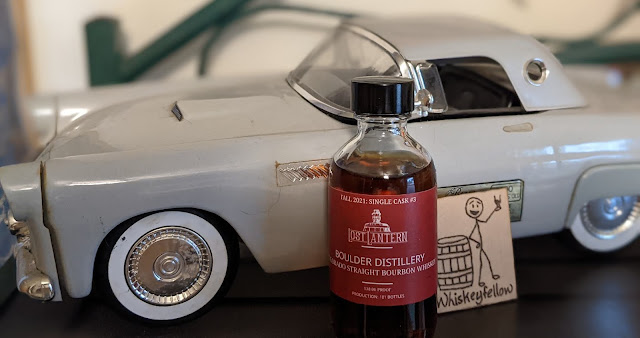 One of the more interesting US-based independent bottlers is Lost Lantern. It finds unique barrels, bottles them at cask strength, and when what is packaged is gone, it is gone forever.

One of the more interesting American distilleries is Boulder Spirits out of Boulder, Colorado. I’ve reviewed several of its whiskeys before. They’re made in a Scottish tradition with their American Single Malts and what isn’t ASM still relies heavily on Scottish malt in the mash.

Lost Lantern just released its Fall Single Casks, and one of those is Single Cask #3, which comes from (you guessed it) Boulder Spirits. In this case, it is a Bourbon. It starts with a mash of 51% corn, 44% Scottish malted barley, and 5% rye. It aged five years in 53-gallon new, charred oak barrels from Kelvin Cooperage. It is non-chill filtered and came out of the barrel at a whopping 138.1°. The yield was only 181 750ml bottles, which Lost Lantern priced at $100.00 each.

“We are proud to have this unique straight Bourbon whiskey as our first selection from Colorado, one of the hotbeds of the whiskey renaissance taking shape all over the country. And this whiskey captures just why we’re so excited about Boulder Spirits, and about Colorado whiskey in general:  it does something new.” – Lost Lantern

Before I #DrinkCurious, I’d like to thank Lost Lantern for providing me a sample of Single Cask #3 in exchange for a no-strings-attached, honest review. Let’s get to it, shall we?

Appearance:  Poured neat in my Glencairn glass, this Bourbon presented as the color of mahogany. It formed a very thin rim that made fat, slow, sticky legs.

Nose:  Single Cask #3 had a bouquet that wouldn’t quit. I expected and prepared myself for the big ethanol blast. Instead, it started with plum, then chocolate-covered cherry, light oak, and orange peel. When I drew the air in my mouth, the cherry became more pronounced.

Palate:  An almost weightless mouthfeel became oily as it traveled down my throat. The front of the palate featured deep, dark chocolate, almond, and maple syrup. Cherry, nutmeg, and English toffee took over the middle. The back offered flavors of coconut macaroon, oak, and dry leather.

Finish:  The tastes of nutmeg, dry leather, oak, cherry, coconut macaroon all morphed into dark chocolate and maple syrup in a medium-long finish.

Bottle, Bar, or Bust:  This was a very interesting pour. As close as it is to Haz-Mat, it was shockingly easy to drink after getting past the first sip. It needs no water added. Single Cask #3 was just lovely from the nosing to the finish. The lack of the ethanol punch on either the nose or mouth was surprising. I’ve had many expressions from Boulder Spirits and this is up near the top. Would I spend $100.00 on it? Without a second thought! This is a Bottle rating that you won’t regret. Cheers!