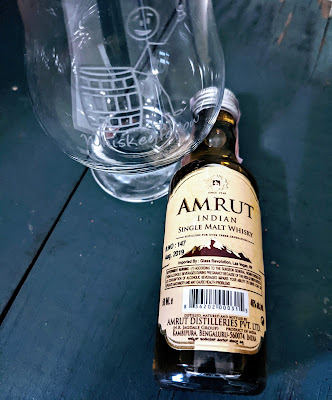 I've reviewed Indian Single Malts before. The thing with Indian whisky (meaning from India, not Native American) is no controlling authority says what can and cannot be considered whisky. You can find stuff that is much closer to rum than a traditional whisky. There are a handful of distilleries that do whisky the way you'd hope.
The category was founded by Amrut. The name, translated from Sanskrit, means nectar of the gods. While Amrut started distilling in 1948, it didn't launch a Single Malt until 2004. The distillery is located in Bengaluru, India.
My review is of Amrut's Indian Single Malt. This is the entry-level expression from the distillery. It is distilled from 100% Indian barley, non-chill filtered, and is naturally colored. While it carries no age statement, it is important to realize that, on average, the angel's share in India is about 12% a year. That blows away anything in Scotland! It also means for every year a whisky ages in India, it is comparable to about three to four years in Scotland.
Amrut is aged in both new, charred oak, and ex-Bourbon barrels. It is proofed at 46% ABV, and you can expect to spend about $50.00 for a 750ml bottle. I picked up my sample bottle at a random liquor store on one of my many ventures. Let's #DrinkCurious and find out what this Indian Single Malt is all about.
Appearance:  Poured neat in my Glencairn glass, Armut presented as the color of dull gold. It left a thin rim on the wall, that rim created medium, sticky legs that were in no rush to return to the pool of liquid sunshine.
Nose:  The aroma wafted from my glass while I was allowing it to breathe. Initially, the smell of citrus was evident. Pineapple and banana gave it a tropical quality, with caramel and raw honey adding an interesting diversion. When I took the vapor through my lips, molasses filled my mouth.
Palate:  The mouthfeel lacked any moisture and I found it oily. The tip of my tongue picked out caramel and toasted oak. As the whisky moved to the middle, the caramel changed to molasses, and it was joined by oatmeal cookies. Flavors of toasted oak, cocoa, and malted barley made up the back.
Finish:  My initial reaction was this had a warm but short finish. A second sip canceled that out. While it was warm, it didn't fall off and lasted several minutes. That warmth became dry, with cocoa powder, cinnamon, tobacco, and toasted oak. Before it vanished, there was a kiss of pineapple.
Bottle, Bar, or Bust:  I wasn't a big fan of the first sip, but like the finish, that changed. Things did get better, but I've had much more engaging Indian Single Malts. And, that's my issue. I don't see myself excited to revisit Amrut Single Malt. Perhaps one of its other whiskies would give more bang for the buck, but as far as the namesake release, it earned a Bar rating. Cheers!
My Simple, Easy to Understand Rating System
Whiskeyfellow encourages you to enjoy your whiskey as you see fit but begs that you do so responsibly.
Posted by Whiskeyfellow at 12:10 PM