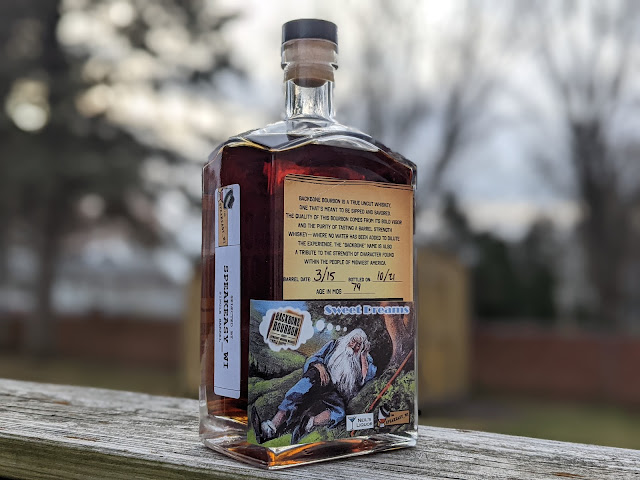 I take part in most of the barrel picks for The Speakeasy_WI, a club I’m a member of. In the case of the one I’m writing about today, I was not on the selection committee due to a whiskey tasting I was hosting.  I did, however, have an opportunity to taste the winning barrel after it was selected, and it has recently dropped at Neil’s Liquors in Middleton, Wisconsin.  It was selected this past August and is priced at $59.99.

I’m talking about a Backbone Bourbon pick called Sweet Dreams. If you’re unfamiliar with Backbone, it tends to pull some incredible MGP-sourced barrels of Bourbon and Rye. The Ryes are branded as Bone Snapper. 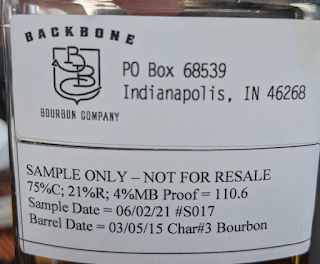 How did the selection crew do?  Let’s #DrinkCurious and find out!

Appearance:  Poured neat in my Glencairn glass, Sweet Dreams took the stage of deep, dark mahogany. It created a thin rim and very fat, slow legs that crawled back down to the pool.

Nose:  The first aroma to hit my nostrils was cherry pie filling. It was joined by toasted oak, a hint of vanilla, and plum. As I inhaled through my mouth, I tasted cinnamon and plum.

Palate:  Sweet Dreams had the consistency of an out-of-control oil slick. It was shockingly not warm considering the proof:  If I didn’t know what it was upfront, I would have guessed this was somewhere around 94° or 96°. The front featured cherry and plum, while the middle offered rye spice and brown sugar. On the back, I tasted thick mocha and oak.

Finish:  I found this finish did numb my hard palate, but sneakily because it was so luxurious it lulled you into a daydream. Toasted oak, cherry, plum, cinnamon, and chocolate stuck just meshed perfectly while it all hung around for a medium finish.

Bottle, Bar, or Bust:  When I first tasted Sweet Dreams, my initial thoughts revolved around how stunning this whiskey was. When I take into account it is only $59.99, I believe you’d have to be insane to pass this one up. Bottle for sure, all day long. Good job, crew! Cheers!

Posted by Whiskeyfellow at 8:24 AM