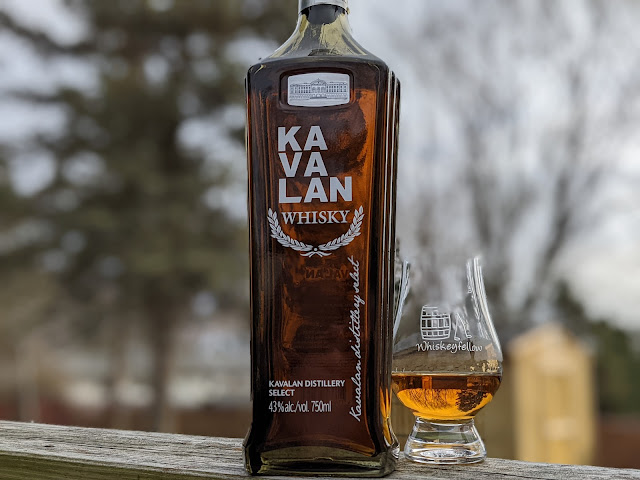 When we think of all the whisky-making regions in the world, places such as the United States, Canada, Scotland, and Ireland come to mind. If we look to Asia, Japan and India ring some bells. But, unless you’re a fan, you probably know the name Kavalan but would still struggle to cite Taiwan as a whisky-making country.

Taiwan is a subtropical island nation off the coast of China. It is whisky-friendly for sure. That heat and humidity lead to a shorter maturation process than many of its counterparts. On average, it experiences between 7% and 15% of angel’s share each year!

The King Car Kavalan Distillery was established in 2005 by King Car Food Industrial Co., Ltd. Yeah that sounds like a mouthful and boring to boot. I can tell you from a visit to China several years ago, those boring names are typical (side note:  I’ve mentioned China and I’ve mentioned Taiwan – I’m here to review whiskies, not opine on diplomatic disagreements.).

It only took nine months before the distillery was up-and-running and producing its first newmake in March 2016. Kavalan sources its water from springs from Snow Mountain and the Central Mountains. King Car is involved in several things, including the production of coffee for several decades, and brought that milling process to Kavalan. It double-distills its malted barley and ages its whisky in two five-story warehouses.

I’m sipping on Kavalan Distillery Select, which is made exclusively for the American market. It is a single malt whisky that is non-chill filtered and naturally colored. Kavalan suggests it is aged in malt-neutral casks. That’s a fancy way of saying the wood has been used enough times that there isn’t much of anything left to take from it as far as flavor is concerned. It carries no age statement, which means that to follow Taiwanese regulations, it must be at least two years old. Remember, due to the subtropical climate, that’s not a short period. It is bottled at 43% ABV (86°) and has a suggested retail price of $59.99. For the record, I snagged my bottle for $39.99 on a Black Friday sale.

Before I #DrinkCurious, I did learn that this particular whisky is made for mixing, although you’d have to get through the marketing speak on the box to figure it out:

“Versatile and super smooth, enjoyed in cocktails or neat, this whisky is a hugely satisfying experience to savor again and again.”

The only reason I was able to translate that is, as I conducted my background research, it was mentioned several times that it is meant to go in cocktails. I ask you to remember that as I talk about the tasting experience. Now, let’s get to it.

Appearance:  Poured neat in my Glencairn glass, this whisky appeared a deep, dark caramel color.  It took a few swirls to form any sort of rim – once it did it remained thin. But, thick, long legs fell from it and dropped back to the pool.

Nose:  I smelled milk chocolate first. A second sniff showed me berries, honey, and apple. A third disclosed malt and leather. When I drew the air into my mouth, a soft kiss of vanilla danced on my tongue.

Palate:  The mouthfeel was creamy and airy at the same time. I know, I know, those descriptors should not happen but in this case, that’s what happened. At the front, butterscotch, vanilla, and caramel gave a sweet introduction. The middle offered toffee and cocoa powder. Then, on the back, flavors of nutmeg, allspice, and oak were followed by a blast of mocha.

Finish: It’ll fool you – it did me. It started short. A second sip doubled the length. The third made it last several minutes. Malt started the journey, followed by clove, toffee, and oak. Then it ended, except it didn’t. While pondering what the elements were, dark chocolate parked on my hard palate and after its monologue, faded away.

Bottle, Bar, or Bust:  A few things here… first of all, I don’t care what Kavalan says. Sure, use this for cocktails. If I didn’t know in advance that this was made for mixing, I’d not have been the wiser. I enjoyed every little bit of this single malt. There was nothing not to like, from the nose to the mouthfeel, the palate, and finish. For the price I paid, this is a stupidly-great whisky. Even at full price, I’d not even blink. The definitive Bottle rating if there ever was one. Cheers!