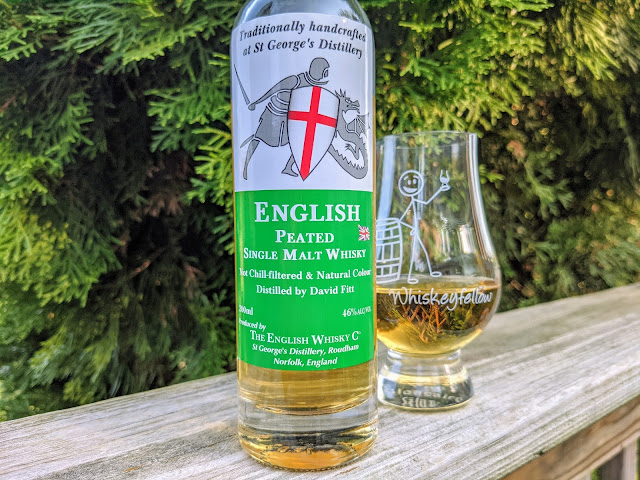 I spend a lot of time in liquor stores when I'm traveling, probably more than I should. But, liquor store runs can be eye-opening because you can come across things that you'd never otherwise see (thanks to our arcane distribution system). On this last trip to Colorado, I visited a store called Daveco, which is in the Guinness Book of World Records as the largest liquor store in the world. As you can imagine, I took my time perusing the whiskey section of the store.
And then, something caught my eye. Something I've never seen before. Something I'm guessing many folks, at least in the United States, haven't. There was a bottle of English whisky!  Would it be like Scotch? Would it be like Irish whiskey? Or would it be something entirely on its own? Well, the $31.99 price tag made it an attractive risk, and, if nothing else, it would be a new experience for me.
The English Whisky Co. Ltd. owns the St. George's Distillery in Norfolk, England. The story starts about 600 years ago with William Nelstroppe, a farmer in Yorkshire who grew and milled grain. Take a quick trip to 1608, and one of his descendants, Rowland, was on the ship Phoenix, which carried the first colonists to Jamestown, America. Fast-forward to the 21st century, and Andrew Nelstroppe, whose family is still farming and milling grain, was determined to bring back whisky distilling to England after more than a 100-year absence. From there, the St. George's Distillery was built. The goal was to do this the right way:

"We were fortunate that Iain Henderson a distiller of some note from Laphroaig, although ready to retire, was talked into coming along to help get us going. In December 2006 we were able to make the first 29 barrels of English whisky and by August 2007 we opened to the public with a visitor centre, fantastic whisky shop, and tours.
Iain soon retired again, but before he did, he spent 16 weeks training David Fitt, a brewer from Greene King to take over. David has been our chief whisky maker since 2008 and as well as overseeing all the production, also ensures the maturation and bottling run smoothly." - The English Whisky Co. Ltd.

What I wound up buying was its English Peated Single Malt. It is made from 100% malted barley. It is non-chill filtered and naturally colored, then aged for an undisclosed period in oak casks. Was it virgin oak? Probably not. Was it former Bourbon casks? Potentially. But that's undisclosed as well. For $31.99, I got a 200ml bottle.
All this research is fun, but I'm really interested in what this tastes like. It is time to #DrinkCurious and find out!
Appearance:  Poured neat in my Glencairn glass, looking at this whisky reminded me of an unoaked Chardonnay. It also left the heaviest rim I've ever seen on the wall, which led to fat, fast legs that crashed into the pool of liquid sunshine.

Nose:  I have no idea what the phenol count was, but this was no wuss in that department. The smoke was heavy, reminiscent of something from Islay, with apple, pear, ginger, oak, and vanilla. As I drew the air in my mouth, the vanilla remained.

Palate:  A creamy, full-bodied texture filled every crevice of my mouth. Interestingly enough, peat wasn't the first thing I tasted. Oh, it was there, but the first flavors I identified were vanilla and malted barley, and then the peat, which was softer than I'd guess based on the nose. The middle was citrus, pineapple, and some tropical fruit I couldn't identify (side note, I'm allergic to several tropical fruits, and as such, have no frame of reference beyond tropical). The back was a combination of oak, white pepper, and spicy ginger.

Finish:  This was one of those freight train finishes that would not give up while featuring smoky peat, oak, white pepper, and ginger.

Bottle, Bar, or Bust:  This was my introduction to English whisky, and it certainly wasn't shy. If you told me this was an Islay Scotch, I don't think I'd be able to pin down which one, but I also wouldn't doubt you. While the math for a 750ml makes this one pricy, the 200ml is absolutely worth drinking and takes my Bottle rating. Cheers!