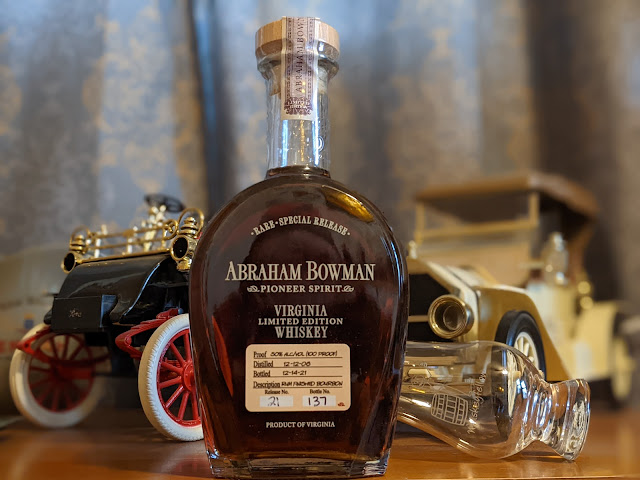 The A. Smith Bowman Distillery is Virginia's oldest, tracing its roots before Prohibition. Initially distilled in Sunset Hills on the family dairy farm and granary, the Bowmans used their excess grain to distill spirits. In 1934, the Bowmans built a state-of-the-art distillery at Sunset Hills Farm. Then, in 1988, a new distillery was constructed near Fredericksburg, about 60 miles away.

A. Smith Bowman doesn't do large-scale distilling. If you visit the campus, you'd consider it a micro-distillery more than anything else. Owned by Sazerac (Buffalo Trace and Barton), Bowman uses the relationship to craft its art.

This month, A. Smith Bowman has released a brand new, limited edition Bourbon called Abraham Bowman Rum Finished Bourbon, named for the commander of the 8th Virginia Regiment in the Revolutionary War. Abraham Bowman is considered the experimental line for the distillery, and in this case, it is one heck of an experiment.

It starts with a nine-year Bourbon aged in American white oak. That’s transferred to rum casks, where it is aged another six, bringing the total to 15 years, which, according to the distillery, might be the oldest rum-cask finished Bourbon ever brought to market.

“Our Abraham Bowman series allows the flexibility to experiment and discover unique new expressions, permitting us to gain new insights along the way. The age on this rum-finished release is unparalleled and resulted in one of our favorite finishes to date.” – Brian Prewitt, Master Distiller

Before I get to the whole #DrinkCurious thing, I’d like to thank A. Smith Bowman for providing me a sample in exchange for a no-strings-attached, honest review.

Appearance:  I poured this Bourbon neat in my Glencairn glass. The color was an enchanting, deep, reddish-orange. I purposefully chose enchanting because I became lost just staring at it. When I was able to break my gaze, I noticed a medium-thick rim yielded fat, sticky tears.

Nose: Molasses, spiced vanilla, caramel, and candied orange peel formed an enticing aroma. It sounds almost like a cheat, but rum-soaked fruitcake rolled across my tongue as I pulled the air into my mouth.

Palate:  Engage the US Coast Guard because there was a massive oil spill in my mouth! English toffee, leather, and pipe tobacco on the front gave way to vanilla, orange zest, and brown sugar at the middle. Charred oak, white pepper, and toasted coconut formed the back.

Finish:  An exaggerated finish of dry leather, pipe tobacco, vanilla, brown sugar, char, and white pepper parked on my tongue and hard palate. It warmed my throat and kept my attention.

Bottle, Bar, or Bust:  This is only a $69.00 Bourbon? Yes, you’re probably looking at secondary just to obtain a bottle. I disapprove of the black market, but I can tell you that I’d buy this at retail all day long and never look back. A Bottle rating for sure, cheers!