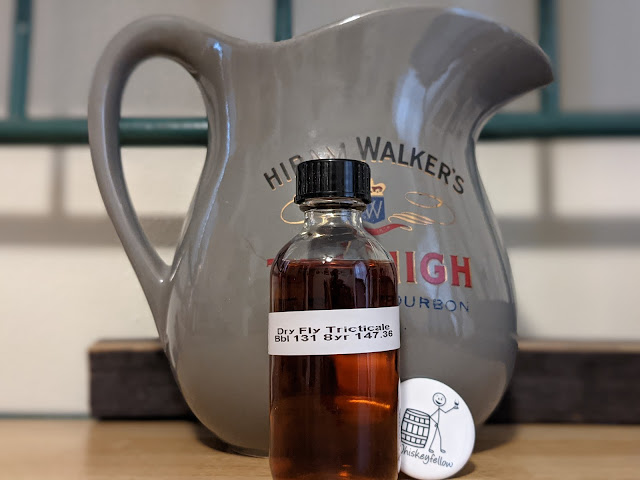 Triticale is special. It is a grain developed back in the 19th century by the Scots and Germans, a hybrid of rye and wheat. The goal was to create a grain that benefited from wheat, which was a high-yield crop, and rye, which was disease-resistant and highly tolerant of environmental conditions.  The result, at least at the time, was to feed livestock. And, as an interesting side-note, if you’re a Star Trek fan, guess what grain the Tribbles got into?

Almost two years ago, I reviewed a 100% Straight Triticale Whiskey from Dry Fly Distilling. It was a three-year, 90° whiskey that I enjoyed, and it earned a Bottle rating.  You can read about it here.

I have to admit, I’ve not thought much about Dry Fly since that review, not because it is unimportant; rather, I’ve just not stumbled on anything else since (for the record, I also reviewed the Straight Washington Wheat Whiskey, which also took a Bottle rating. So, imagine my pleasant surprise when a friend provided me a sample of a single barrel release of its Triticale Whiskey.

It is the same 100% Triticale mashbill, using the same 53-gallon Independent Stave Company new, American oak barrels, except instead of being aged three years, this barrel was aged eight. It also weighs in at an Haz-Mat 147.36°!  I couldn’t find a price for this whiskey, so my rating will not take the price into account.  For the record, this sample comes from Barrel 131.

Without further ado, it is time to #DrinkCurious and discover what this aged, high-proof whiskey is all about.

Appearance:  Tasted neat in my Glencairn glass, this whiskey offered a deep, caramel color. With the limited amount of water left in the barrel, there wasn’t much to the rim. Everything just ran back down the wall and into the pool.

Nose:  The aroma began with berry and cherry, and underneath those, I smelled vanilla mint. When I took the air into my mouth, I could only pull oak. It is important to note there was absolutely no alcohol punch despite the intense proof.

Palate:  The mouthfeel was medium-bodied with a slightly oily texture. Almond and vanilla were on the front, berry and mint on the middle, and black pepper, clove, and cinnamon on the back.

Finish:  There was no astringent quality. There was, however, a long, heavy oak influence. Hints of berry and nutmeg were there, but they were overpowered by freshly-cracked black pepper and cinnamon Red-Hots.

I enjoyed the 3-year more than this single barrel. One of the reasons was the 3-year came across as similar to a Lowland Scotch. This single barrel was more of a traditional wheat whiskey with plenty of spice. However, I decided to go an extra step and see what two drops of distilled water would do considering the proof was so high.

Nose:  Things were heavily muted, but I was able to smell thick caramel and roasted almonds. When I breathed the vapor into my mouth, there was more vanilla.

Palate:  The weirdest thing happened as I took my sip. It started with vanilla and then became the absolute hottest, spiciest cinnamon I’ve ever tasted. Red Hots is a candy that is intensely cinnamon. I can eat Red Hots and smile. This did not make me smile at all. In fact…

Finish:  I have never, ever had a whiskey make me cry before. Today, that changed. I felt like I took a swig of napalm. Tears came from my eyes, and I had to grab a fistful of animal crackers to put out that fire.

Bottle, Bar, or Bust:  As I stated earlier, I’m not sure what this whiskey retails for, and conveniently enough, it doesn’t matter. Neat, this takes a Bar rating. If you enjoy munching on ghost peppers like anyone else would eat popcorn, this one is going to be for you. I don’t know anyone who does that. As such, with water, it is an easy Bust.