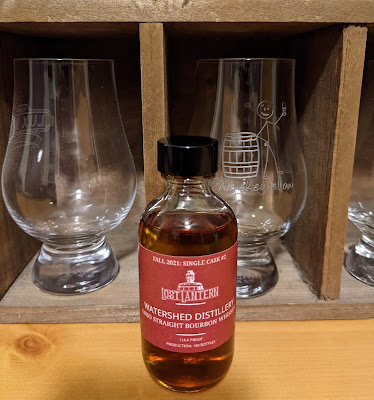 In Columbus, Ohio, there exists a micro-distillery called Watershed Distillery. Initially thought up by partners Greg Lehman and Dave Rigo, they translated that plan into a working distillery in 2015. They started with a small still, then joined by a larger one from Headframe Spirits in Montana.

Watershed was the second post-Prohibition legal distillery in the state, and it maintains a restaurant on-premises. The distillery utilizes locally-grown ingredients, and some are unusual.

“We founded Watershed Distillery on the principles of community in 2010. We wanted to live in, work in and contribute to the community in which we grew up. We aimed to create spirits that stood apart in quality and character. Along the way, we set out to form a community of our own. One that could gather together to savor, celebrate and enjoy good spirits and company.” – Watershed Distillery

That brings us to Lost Lantern, an independent bottler of American whiskeys. I’ve reviewed a handful of its releases, most of which earned Bottle ratings. Lost Lantern just released its Fall 2021 Cask program, and one of those casks is from Watershed.

Named Fall 2001: Single Cask #2, it is a five-grain Bourbon distilled from a mash of corn, rye, spelt, malted barley, and wheat. I’ve had whiskeys made from unusual grains, but I can say with confidence spelt isn’t one of them. Spelt is an ancient grain related to wheat, rye, and barley. The newmake aged five years in 53-gallon new, charred oak barrels coopered at Independent Stave Company. Non-chill filtered and naturally colored, Lost Lantern packaged it at barrel proof of 118.8°.  Only 160 bottles exist, and a 750ml will set you back $100.00.

Before I #DrinkCurious, I’d like to take a moment and thank Lost Lantern for providing a sample on Single Cask #2 in exchange for a no-strings-attached, honest review.

Appearance:  Served neat in my Glencairn glass, this cask strength Bourbon appeared as the color of dark chestnut. It formed a thinner rim that created thick, slow legs that fell back to the pool.

Nose:  Aromas of corn, nutmeg, caramel, toasted oak, and leather filled the air. As I drew that into my mouth, menthol caressed my tongue.

Palate:  I discovered an oily mouthfeel with a medium body. The front of my palate found caramel, corn, and candied orange slices. The middle featured vanilla, baked apple, walnut, and leather. Then, on the back, I tasted tobacco leaf, black pepper, and toasted oak.

Bottle, Bar, or Bust:  Watershed Distillery’s Bourbon drank far beneath its stated proof. There is no way in the world you would convince me it was 118.8°, as it was such an easy sipper! While I wasn’t a fan of the menthol note from the nosing, that’s such a small part of the experience it is easily dismissed. Everything meshed as you’d want, and I’m not sure if that’s due to the unusual ingredient of spelt. Whatever it is, it works, and I’m happy to convey my Bottle rating for it. Cheers!