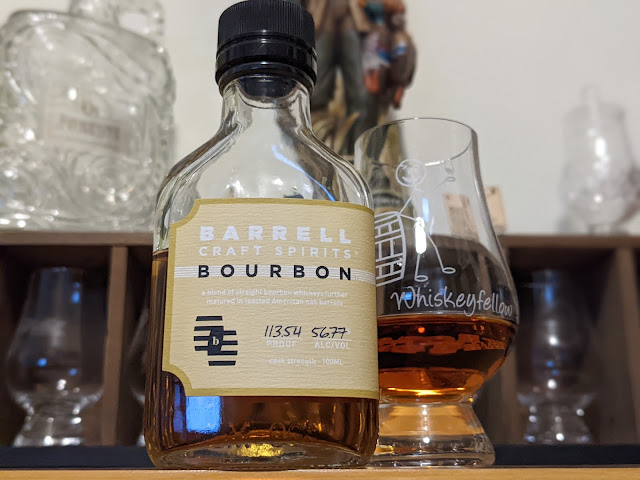 I’m no stranger to Barrell Craft Spirits. With its Master Blender Joe Beatrice and his team, they bring us (always) barrel-proof whiskeys that go beyond the average sourced offerings. Sometimes the whiskeys are US-based, occasionally Canadian, sometimes from other venues, but you can count on what’s in the bottle to be decidedly different from what you’re used to.

Recently, Barrell introduced us to its Gray Label whiskeys. These were premium offerings, above and beyond the “standard” releases. Made from older stocks, they commanded a premium price tag. And, now, there’s something called Gold Label, which is a step above the Gray.

Today’s review is Barrell Gold Label Bourbon. What’s inside is sourced from Tennessee, Kentucky, and Indiana. You can read that (in my opinion) as George Dickel, Jim Beam, and MGP, respectively. These are 16- and 17-year stocks! Barrell opted for four lots of barrels:

The exciting thing is that the last group was finished in toasted virgin oak barrels.

I want to thank Barrell Craft Spirits for providing me a sample of Gold Label Bourbon in exchange for a no-strings-attached, honest review. That means it is time to #DrinkCurious and figure out what this is all about.

Appearance: Drank neat from my Glencairn glass, this Bourbon was deep and dark, the color of burnt umber. It took an effort to create a rim, and when it did, it was micro-thin but led to long, wavy legs.

Nose: Crème Brulee was the first thing I smelled, and it almost punched me in the nose. Beneath that were toasted marshmallow, hazelnut, almond, oak, cherry pie filling, and apple pie filling (yeah, I had to come back several times to confirm those last two). When I drew the aroma in my mouth, it was like sucking on chocolate-covered cherries.

Palate:  The mouthfeel was creamy and thick. Caramel, vanilla, peanut, and leather ruled the front. The middle featured fresh mint, cherry, plum, and berry. I tasted ginger, oak, cocoa, and tobacco on the back.

Finish:  This was one of those never-ending finishes. Sure, it ended eventually, but it seemed to run forever. Mint, oak, black pepper, ginger, chocolate, and marshmallow cream stuck around for a captivating experience.  There was no Flintstone vitamin quality from the Dickel portion. This is one of those sneaky bastards – it drinks much lower than its stated proof, but, dang, it makes up for it with a 2x4 once it catches up.

Bottle, Bar, or Bust:  I’ll get this out of the way. I’ve never paid $500.00 for a Bourbon, and I don’t see myself doing that anytime soon. That’s me. Barrell Gold Label Bourbon is stupendous. It is gorgeous. It is delicious. It is amazing. If you have $500.00 burning a hole in your pocket, this would be a nice investment. It would be a real treat for those of us who have lighter wallets to try this at a Bar. Cheers!