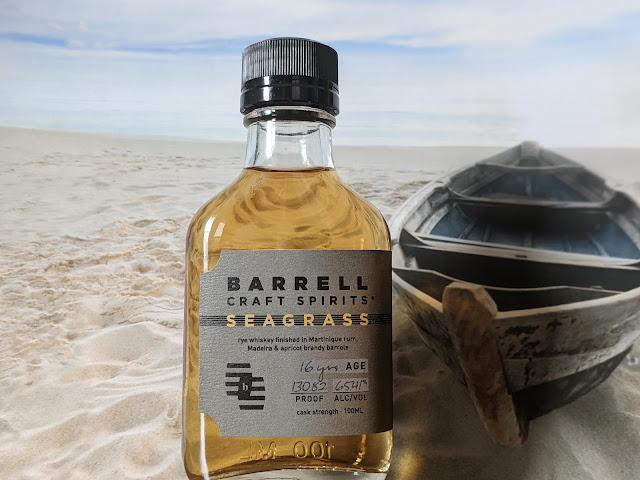 Barrell Craft Spirits has recently released some high-end and premiere whiskeys that go well beyond its portfolio most of us find familiar. There exists a Gray Label series and a Gold Label series. The Gold series is a step above the Gray, and the Gray is above the standard releases.

In 2021, I named Barrell Seagrass the winner of my Best Blended Whiskey Award.

“This is probably the most unusual whiskey I’ve tried. It was sweet. It was spicy. It was earthy. The challenge became both exciting and a little frustrating. But, as I experienced the frustration, I caught myself smiling because the mystifying quality just worked for whatever reason.”

As such, you can imagine my excitement as I came across a 16-year age stated Gray Label Seagrass. At the same time, I found myself concerned. Would Gray Label be like the original? Would it be a completely different whiskey? Would Barrell take away some of the magic I found in Seagrass?

Gray Label Seagrass starts with 16-year 100% Canadian Rye barrels. The distiller is undisclosed. The original Seagrass was a blend of Canadian and MGP-sourced Rye whiskeys. So, this is already a bit different.

Those barrels were divided into two groups. A portion of the first was finished in apricot brandy casks. A selection from the second group was transferred to Martinique Rhum barrels. Then, a blend of the first and second groups was finished in Malmsey Madeira barrels. From there, all were blended into a single batch. Barrell indicates that Gray Label Seagrass is aged in Canada and the United States and bottled at a cask strength of 130.82°.

A project like this isn’t going to come cheap. The suggested retail for Gray Label Seagrass is $249.99 for a 750ml package.

Before I get started on my review, I want to thank Barrell Craft Spirits for providing me a sample and the opportunity in exchange for a no-strings-attached, honest review. Now it is time to #DrinkCurious and taste how this pans out.

Appearance:  Served neat in my Glencairn glass, Gray Label Seagrass was the color of gold bullion. It even looked thick like melted gold. When I gave it a gentle swirl, a thin rim led to slow, sticky tears.

Nose:  As I let my glass rest on my bar, I could smell a mix of spices filling the air. Once I brought it near my face, things became more apparent. Well, kind-of-sort-of. The first thing I identified was cinnamon. Then I found allspice and nutmeg. Then there was a smidge of tobacco leaf. The aroma then changed to sweet with caramel and fresh grass. That transformed to earthy with mushroom and ripe olive, which gave off a puff of brine. When I drew the air through my lips, I picked out what I could swear was buttered cornbread.

Palate:  The unusualness of Seagrass continued with an airy and oily texture. I know that doesn’t sound like a plausible combination, but that’s what it was. The apricot brandy slammed into the front of my palate. It fell off in the middle, allowing notes of soft rye, fried plantain chips, shelled sunflower kernels, and cherry cola. A complicated back featured oak, citrus, green grape, plum, and smoke.

Finish:  The smoke and oak flavors continued into the finish and stuck around long enough to be the final notes. Before everything dropped off, the cherry cola, plum, and apricot made an encore presentation and slowly faded.

Bottle, Bar, or Bust:  Let’s get a few things out of the way. I’ve been on a mission to find an enjoyable Canadian whisky for a few years and have come up empty. Gray Label Seagrass was unlike any whiskey I’ve had, Canadian or otherwise, and frankly, it wasn’t even reminiscent of the original Seagrass, except for being just off-the-wall different.

It is uncommon for me to consider paying $250.00 for a whiskey – any whiskey. It happens, but the whiskey has to be incredible. Gray Label Seagrass is so unlike anything else I’ve ever experienced; and because of that, I could picture myself saving up for a Bottle. If that’s too much for your budget, you’ll want to find a good whiskey bar and buy yourself a pour or two. You’ll not regret it.

On a final note, I’m not counting this as a “win” for Canadian whisky because this is a one-off. I’m still on that quest. Cheers!