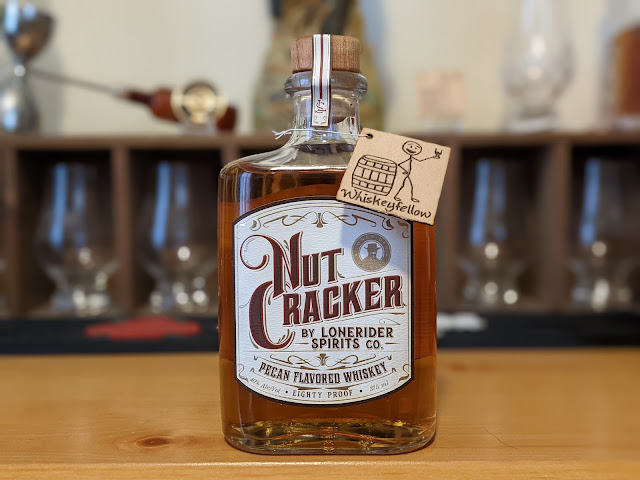 Flavored whiskeys are polarizing. You have the purists who won’t even consider one, believing that everything flavored is just Fireball, and you have others who will only drink flavored whiskeys. I fall nicely in the middle. I’ve had some lousy ones, and I’ve had some that I found impressive.

When the folks at Lonerider Spirits reached out to me about its Pecan Flavored Whiskey, I decided I was up for the challenge of tasting a newcomer to the pecan-flavored whiskey field. I’ve reviewed a handful of those and can discern which ones are worthwhile and which are, well, not.

Lonerider Spirits started as a North Carolina brewery, with Sumit Vohra and Chris Mielke at the helm. The partners then decided to go a step further and entered the spirits game. The distillery side was established in 2018.

“Over a dram of small-batch whiskey in their favorite saloon, they pondered how a craft brewery could expand into the Wild West of the spirits market.

They came to the conclusion you needed to be tough, go against the grain, and use whatever you had at your disposal to get unique liquor into people’s hands to savor. Most of all – you needed to be an outlaw.

Lonerider has a few finished Bourbons, ready-to-drink (RTD) cocktails, and liqueurs beyond the Pecan Flavored Whiskey.

The Pecan Flavored Whiskey carries no age statement or information about the actual distiller. We do know it wasn’t Lonerider, as the label says “Produced and Bottled by” on it. And, because of that, we don’t know what type of cooperage was used. That’s not the end of the world, especially since this isn’t a high-end whiskey. You’ll find this one on store shelves right around $17.95 for a 375ml package.

Before I get started on my tasting notes, I’d like to thank the team at Lonerider Spirits for providing me a sample of its Pecan Flavored Whiskey in exchange for a no-strings-attached, honest review. It is time to #DrinkCurious and get down to brass tacks.

Nose: An enticing aroma filled the room, made of pecan praline, thick caramel, vanilla custard, and honey graham crackers. When I pulled that into my mouth, the pecan came into its own.

Palate:  For only 80°, I was taken aback by how creamy and full-bodied this whiskey was. I tasted a huge dollop of vanilla cream on the front, then cinnamon and pecan. The middle featured pumpkin, nutmeg, and caramel, while the back had toasted oak, allspice, clove, and black pepper.

Bottle, Bar, or Bust: Several companies are making pecan-flavored whiskey, but few hit the legal requirements of whiskey. Most of the flavored whiskeys I encounter are below 80°. Lonerider’s Nut Cracker does the full Monty with its version. With its attention-getting flavor, creamy mouthfeel, and welcoming nose, it is easy to understand that Lonerider wasn’t playing any games when it made this whiskey. If there ever was one, it is a true dessert drink, and I’m happy to slap a Bottle rating on it. Cheers!