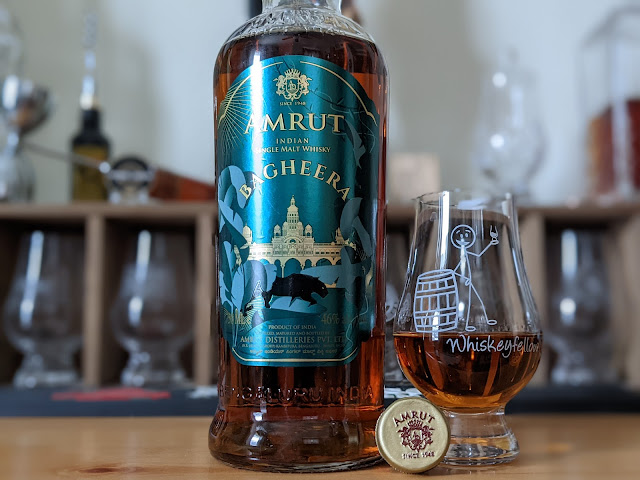 If you read (or watched) The Jungle Book by Rudyard Kipling, you’ll remember the black panther that protected “man-cub” Mowgli. The panther’s name was Bagheera (which, in Hindi, means black panther). Bagheera was wise and well-respected by most of the other jungle animals, and when he found Mowgli in a wrecked canoe, Bagheera dedicated his life to teaching him and protecting him from harm.

Amrut is the original, single malt distillery of India. Founded at Bengaluru in 1948, it didn’t produce its first single malt whisky until 2004 and grabbed worldwide attention when Jim Murray gave Amrut Fusion a 97 rating in 2010. Bengaluru is about 3000 feet above sea level, with temperatures between 61F and 94F, while the average humidity is 66%. The climate causes whisky to age about 3.5 times each year compared to what Scotland experiences, translating to about 12% loss annually to the angels.

Today I’m sipping on Amrut Bagheera. It is a limited-release offering, taking its flagship Amrut Single Malt and finishing it in former sherry casks. Amrut begins its journey with a mash of six-row barley, 99% of which is unpeated and 1% peated. That’s then aged in both former Bourbon and new, charred American oak barrels for an undisclosed period. While the type of sherry cask is unknown, I’m going out on a limb and believe it was Oloroso, and my tasting notes will explain why. It is non-chill filtered and naturally colored. You can expect to pay about $89.99 for a 46% ABV (92°) 750ml package.

I want to thank Glass Revolution Imports (the US importer) for providing me a sample of Bagheera in exchange for a no-strings-attached, honest review. Now it’s time to #DrinkCurious and taste what it is all about.

Nose: Bagheera was very fragrant from the moment I opened the bottle. It was as if I had released a djinn from its prison. There was no possible way to miss the sherry influence. Raisin, date, dried cherry, leather, and candied citrus peel wafted from it. Caramel, cocoa, and oak were next, with a touch of brine for good measure. As I pulled the aroma into my mouth, leather and date tangoed across my tongue.

Finish: Remember that 1% peated barley? I forgot about it until this point. A puff of mild smoke enveloped date, raisin, dried cherry, apricot, and dry oak from beginning to end. There was some pucker power to the dryness as it lingered for a medium-to-long finish.

Bottle, Bar, or Bust:  With single malts, there are sherry bombs and sherry-influenced whiskies. Bagheera falls somewhere in-between. It wasn’t overwhelming, but it wasn’t a supporting cast member. I found Bagheera to be tasty and decidedly different. Sure, it is non-age stated, but nearly every other Indian single malt is. I’d have no problem paying the $89.99 because the experience was delightful. Bagheera earns every bit of my Bottle rating. Cheers!