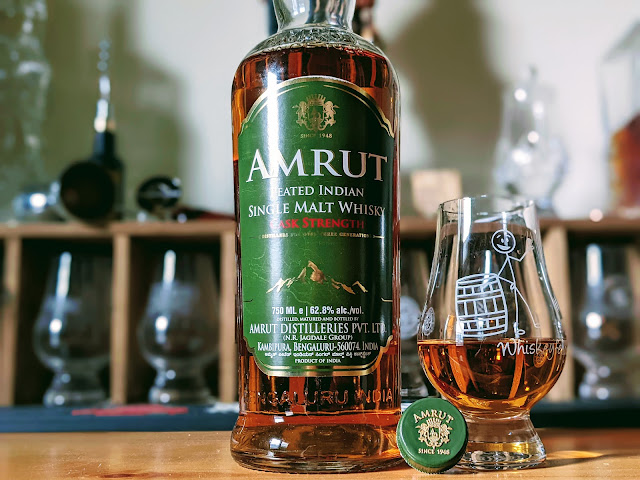 Amrut is the original, single malt distillery of India. Founded in Bengaluru in 1948, it didn’t produce its first single malt whisky until 2004 and grabbed worldwide attention when Jim Murray gave Amrut Fusion a 97 rating in 2010. Bengaluru is about 3000 feet above sea level, with temperatures between 61°F and 94°F, while the average humidity is 66%. The climate causes whisky to age about 3.5 times each year compared to what Scotland experiences, translating to about 12% loss annually to the angels.

Today I’m sipping on Amrut Indian Peated Single Malt Cask Strength. Unlike many Indian single malts, including those from Amrut, this version is distilled from 100% peated barley sourced from Scotland. Although it carries no age statement, it spent between four and six years in former Bourbon barrels and new, charred oak. It is non-chill filtered, naturally colored, and weighs in at a hefty 62.8% ABV (125.6°). You can expect to pay around $105.99 for a 750ml package.

Before I get to my tasting notes, I want to thank Glass Revolution Imports (Amrut's US importer) for providing me a sample of this whisky in exchange for a no-strings-attached, honest review. Now, it is time to #DrinkCurious.

Nose: As you might guess, the first aroma picked out was peat. It was more sweet than smoky, although the latter was easy to discern. What followed was salted chocolate, brown sugar, apricot, date, orange, and, finally, fresh pastry. When I pulled the air into my mouth, it was as if a vanilla bomb went off with date as the aftermath.

Palate:  An oily, heavy texture greeted my tongue. The front of my palate tasted vanilla, cooked plantains, and date. As it transitioned to the middle, I could imagine biting into brisket straight off the smoker, accompanied by toffee, orange peel, and lemon peel. The back featured salted caramel, clove, and charred oak.

Bottle, Bar, or Bust:  I’ve had several peated Indian single malts and expected more of a peated punch than what I experienced. Oh, it is there, but it steps aside easily enough to make the other flavors shine. I have to admit, this cask-strength version Amrut Peated Single Malt wowed me. Personally, I found this to be a hell of a deal, and it would be a mistake to pass it up. A Bottle rating for sure, cheers!