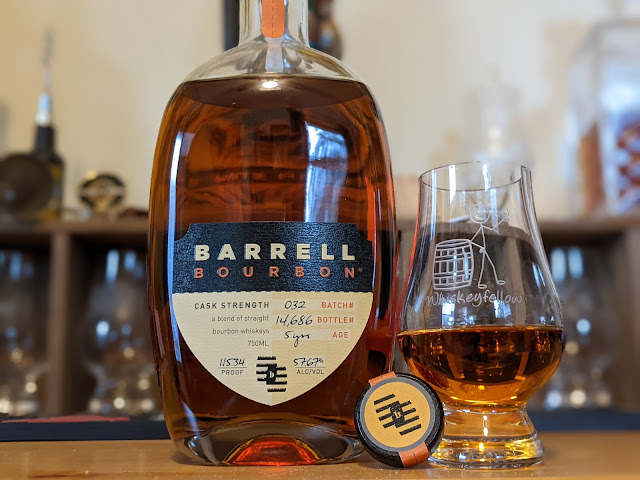 Barrell Craft Spirits is one of those non-distilling producers (NDP) that causes me a little giddyup in my step when a sample winds up on my doorstep. Barrell is a Louisville, Kentucky-based NDP that doesn’t just source a barrel; they take various barrels and blend them to something (hopefully) special. I’ve been impressed with what Joe Beatrice and his crew created for the most part.

The most recent release is Batch 032, a Bourbon married of barrels from Kentucky, Tennessee, and Indiana. Who distills those? While Barrell won’t disclose that information, I’ve long suspected the Kentucky distillery is Jim Beam, Tennessee is George Dickel, and Indiana is, without a doubt, MGP. I’ve published this repeatedly; Barrell has never corrected me.

“Batch 032 began with a balance of two sets of barrels: a selection of 5 and 6-year-old barrels with a creamy and tropical profile and a selection of 6, 7, and 10-year-old barrels vatted for their complex, old, woody character. These two sets of barrels were slowly blended over three months. A small group of spice-driven 7-year-old barrels with notes of cinnamon toast, coffee bean, and chocolate were then carefully added to complete the blend. The result is a decadent and rich bourbon with layers of spice and nuttiness.” – Barrell Craft Spirits

One thing I respect Barrell for is everything they produce is at cask-strength. Nothing is proofed down. If you want to change things up, you can add a few drops of water yourself, but Barrell won’t do that for you. Batch 032 weighs in at 115.34°, and you can expect to pay about $89.00 for a 750ml package.

I thank Barrell Craft Spirits for providing me a sample of Batch 032 in exchange for a no-strings-attached, honest review. Now, it is time to #DrinkCurious and taste how it fares.

Nose: From the moment I cracked the lid, a waft of old oak hit my nostrils. Upon closer inspection, I found cedar, cherry, plum, and caramel, which then became floral before spicy notes of cinnamon and mint kicked in. When I pulled the air into my mouth, vanilla and caramel caressed my tongue.

Palate: Many of the Barrell Bourbons I’ve tried were oily. Batch 032 was different. The texture was creamy with a medium weight. The first flavors to engage my palate were cinnamon spice, vanilla, and almond pastry. The back offered a taste of clove, charred oak, and ginger spice.

What happened to the middle? That was almost transitionary between the softer front and spicier back.

Finish:  Once I swallowed, the finish was soft and spicy before ramping up to big, bold spices. Cinnamon, clove, and ginger led to a kiss of citrus before being completely subdued by freshly-cracked black pepper. It was a ramping experience.

Bottle, Bar, or Bust:  I had fun with Batch 032. The middle was almost frustrating as I took sip after sip, trying to find something that would stand out. It is also one of those dangerous whiskeys; there is no way you’d guess this was 115+° - it went down way too easily. And, because I attempted to nail down the middle, I got a tad buzzed. If you like rye-forward Bourbons (I do), you will go ga-ga over Batch 032. It is a true representation of a Bottle rating. Cheers!