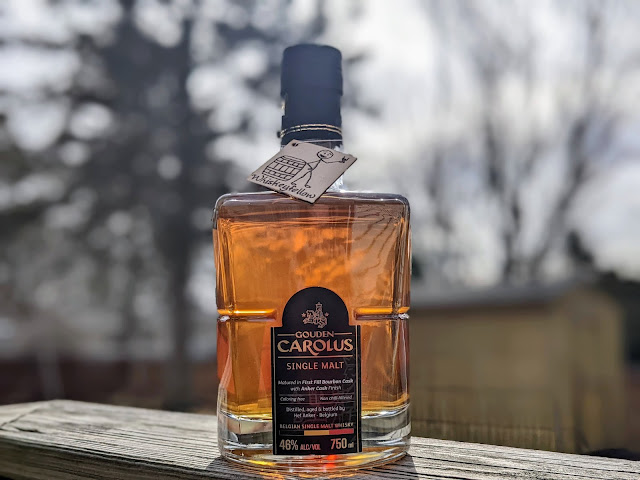 As you’ve probably figured out, I have a penchant for finding unusual whiskeys to review. It isn’t that I don’t enjoy tried and true stuff because I do. For me, uniqueness is special, good or bad. I relish the idea of reviewing something only a few have.

Let’s cross the pond and begin our adventure in Belgium. When you think of Belgium, what comes to mind is likely beer, not whiskey (or, in this case, whisky). In the 9th century, Charlemagne ordered each monastery to have its own brewery to help monks become self-sufficient. Not until the 16th century, others aside from monks brewed their beer.

From 1637 to 1914, the Van Breedam family milled and distilled grain into jenever (basically the ancestor of gin). The family also brewed beer. However, the family farm had fallen into a state of disrepair, and in 2009, a plan was launched to restore it. When the brewery, now called Het Anker, was upgraded by Charles Leclef, he was determined to distill beer into whisky. Leclef brought in the first copper pot still in all of Belgium to make that happen.

Het Anker has a wildly-popular beer called Gouden Carolus Tripel. I can’t comment more than that as I’m not a beer drinker except to say it is supposed to be very malt-forward and made from 100% malted barley. Tripel is a style of beer similar to a strong pale ale.

Today I’m exploring Gouden Carolus Single Malt Whisky. Het Anker used the same mash and Belgian yeast to make Gouden Carolus and sent it through the still. It was then aged initially in first-fill Bourbon barrels, then finished in Anker casks, which are wine casks that are scraped and charred by a cooper to Het Anker’s specifications. There is no stated age on the package, but it is proofed to 46% ABV (92°). I purchased my bottle off a store shelf in Denver for $59.99.

Frankly, I have no idea what to expect. I’m excited. Let’s #DrinkCurious and see how this scores!

Nose:  Grapefruit was initially the dominating aroma. Heavy malt then transformed to a fresh dough, rounded by notes of vanilla and apple. When I inhaled through my lips, that subtle vanilla became a bomb of it.

Palate:  This whisky was full-bodied to the point that it was almost meaty. I tasted vanilla, cream, and green peppercorn on the front, while the middle featured malt, orange zest, and a punch of grapefruit. The back offered bitter chocolate, oak, and leather.

Finish: Leather continued and was bold throughout. Charred oak, chocolate, green peppercorn struggled to break through. My hard palate sizzled during the medium-to-long finish.

Bottle, Bar, or Bust: As stated earlier, I’m not a beer drinker. If this is what Tripel tastes like, I could see myself interested. I’ve had whiskies aged in beer barrels before, and I immediately recognized that grapefruity quality. The bitter chocolate was difficult to identify, as it was far more so than any dark chocolate I’ve had. The texture was fascinating. From a strictly curious standpoint, mine was piqued. From the tasting perspective, I enjoyed Gouden Carolus Single Malt. For the $59.99 investment, I’m more than satisfied and am happy to convey my Bottle rating for it. Cheers!