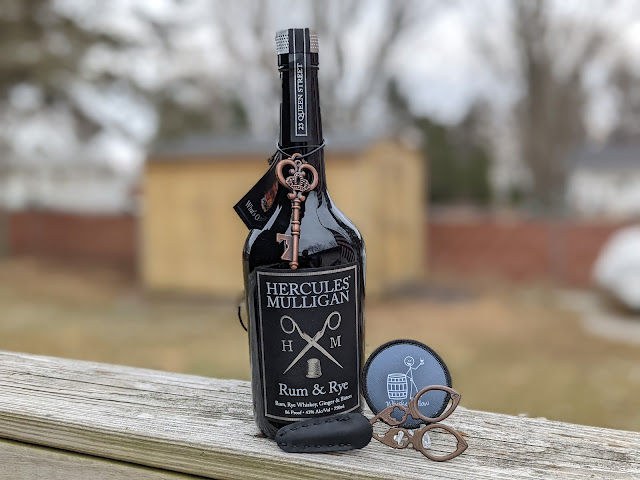 Who was Hercules Mulligan? Aside from the Greco-Celtic connotations, he was a tailor, an Irish immigrant, a spy, and a hero of the American Revolution. What made him a hero?

“[He ran] his sartorial business at 23 Queen Street in Lower Manhattan. His most frequent customers were British officers who trusted his friendly and talkative demeanor, plus this ‘Agent Double-Oh-Needle’ offered them the finest Spirits that loosened their tongues and revealed many a secret. In fact, Hercules saved George Washington’s life on two occasions through highly-classified information careless British officers spilled as their measures were being taken. The King’s men wanted to capture Washington and get rid of him, but precious intelligence saved his skin…” – Hercules Mulligan Company

That sounds like a typical whiskey backstory, so I Googled him. Hercules Mulligan was the real thing, as even the CIA acknowledges him!

Part of the #DrinkCurious lifestyle means that I occasionally have to delve outside my comfort zone (whiskey). I’ve reviewed tequila, rum, and liqueurs. Today? Ready to Drink (RTD) cocktails.

Hercules Mulligan Rum & Rye began in 2019 and is based on a cocktail recipe from those revolutionary times. It is a 50:50 blend of Caribbean-aged rum and American rye whiskey bottled at 86°. That recipe includes a blend of three aged rums, three aged ryes, fresh ginger, simple syrup, and bitters. Until recently, it was only available via Flaviar (an online spirits membership club) and is now on the open New York market. Soon, it will be available throughout New England. You can expect to pay about $38.00 for a 750ml bottle.

Here’s the deal, and I say this every time I review something that’s not whiskey:  I have no idea what’s involved in penning an RTD cocktail review. I know how to write whiskey reviews, so my review of Hercules Mulligan will be in my usual format.

Before that, I wish to thank the Hercules Mulligan Company for a sample of this RTD cocktail in exchange for a no-strings-attached, honest review. Let’s get to it!

Appearance:  Served neat in a rocks glass, Hercules Mulligan was deep, orange-amber. It formed a skinny rim with sticky droplets that grabbed the wall.

Nose: The ingredient list didn’t include orange (although it didn’t go into detail about what kind of bitters were used), but that aroma was evident from across the room. When I brought the glass nearer to my face, I immediately picked out ginger, followed by honey, menthol, and a touch of rye spice. Try as I might, I couldn’t discern any molasses or other expected “rummy” notes. Ginger and the (orange) bitters continued when I drew the air into my mouth.

Palate: The texture was heavy and rich. Raw honey and citrus started the show. Honey continued to the middle, mixed with vanilla and rye spice, while the back offered flavors of dry oak, orange, a hint of smoke, and more honey.

Finish:  Long-lasting and unwavering, the oak and rye spice warmed my mouth and demanded it is unforgotten. A gentle kiss of honey rounded things out, refusing to be left behind.

Bottle, Bar, or Bust:  I had no idea what to expect, but I am impressed here. My go-to cocktail is a whiskey Old-Fashioned sweet. Hercules Mulligan lacked the fruit and olives that I’d typically find in my chosen cocktail, but dang, this Rum and Rye is good. It wouldn’t have crossed my mind to buy an RTD cocktail, but my interest is piqued. I hate making cocktails (I usually convince Mrs. Whiskeyfellow to do that), I could easily see myself keeping a Bottle in my whiskey library. That’s my rating. Cheers!