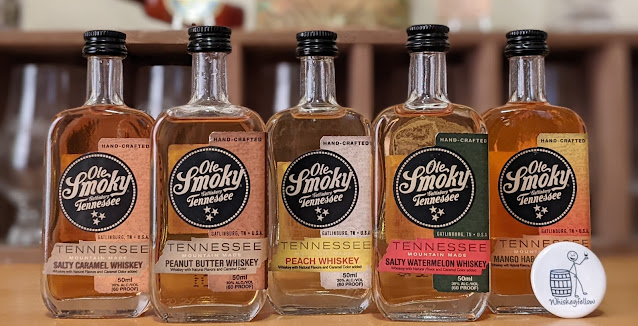 If you’ve been to a liquor store, convenience store, grocery store, or truck stop, you’ve probably seen Ole Smoky Distillery products on the shelf. Ole Smoky is known for flavored moonshines typically packaged in mason jars and flavored whiskeys.  Located in Gatlinburg, Tennessee, it was founded in 2010; it is one of the fastest-growing spirits brands in the United States, available in all 50 states plus another 20 or so countries.

Earlier this year, I reviewed a Straight Tennessee Bourbon from Ole Smoky called James Ownby Reserve. I was impressed with how good it was, and it scored my Bottle rating. Ole Smoky also sent me five samples of its flavored whiskeys:  Peach, Peanut Butter, Salty Caramel, Salty Watermelon, and Mango Habanero.

There are some commonalities among each of the five. They’re all 60°, making them whiskey liqueurs, and all have natural flavors with added caramel coloring. Each of the five runs $19.99 and should take minimal effort to locate a bottle.

I’ll provide notes on each, but before I do, I thank Ole Smoky for these samples in exchange for no-strings-attached, honest reviews.  Let’s #DrinkCurious and take them on one at a time… 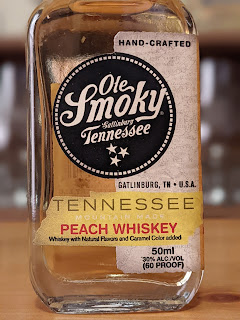 The first one up to bat is Ole Smoky Peach Flavored Whiskey.

Appearance:  Served neat in a Glencairn glass, this whiskey was the color of chardonnay wine. It formed a thick ring on the glass, which generated slower legs.

Nose: As you’d imagine, I smelled peaches and nectarines. The aroma was overwhelming, but that sensation subsided as I allowed it to rest for a while. When I drew the air into my mouth, it seemed as if peaches and cream rolled past my palate.

Palate:  The texture was thick and creamy. As far as flavors are concerned, they were limited to peach and vanilla from front to back.

Finish:  Medium in duration and slightly peppery, the peach continued to the end.

Bottle, Bar, or Bust:  If peaches and cream are your things, this liqueur won’t disappoint. The peppery quality in the finish was unexpected, but it helps remind you this is booze and not something like Capri Sun. I wasn’t entirely happy with it, though, and I will give this one a Bar rating. 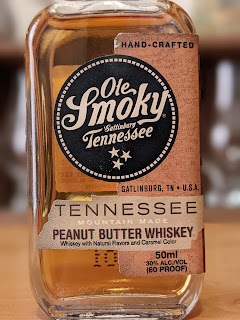 The next batter stepping up to the plate is Ole Smoky Peanut Butter. Let’s get something out of the way here: I’m a peanut butter freak. It could be a sandwich, mixed in ice cream, or it can be a flavored whiskey, and merely because it says “peanut butter” on it, you can bet your bottom dollar I’m going to taste it.

Appearance:  A yellow-gold appearance offered a medium-thick rim on my Glencairn glass that yielded slow, wavy tears that fell back to the pool.

Nose:  Honestly, I’d have been shocked if I didn’t smell peanut butter. Thankfully, there was a lot of it, but I also experienced graham crackers. When I inhaled through my lips, only the peanut butter remained.

Bottle, Bar, or Bust:  I was slightly confused by the peanut butter nose, roasted peanut palate, and peanut butter finish. Regardless, it was tasty. While I have had better peanut butter flavored whiskeys, there’s nothing wrong with the Ole Smoky version. I’ll toss a Bottle rating at it. 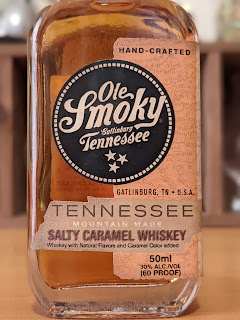 Salty Caramel is next in line. I’ve sampled a few salted caramel flavored whiskeys over the years, and typically they’re good on their own without the need to put them in cocktails (but there’s no reason you couldn’t).

Appearance:  The color certainly matched the name. It formed a heavy rim and stuck like glue to the wall of the Glencairn glass.

Nose: The aroma of caramel syrup, reminiscent of ice cream topping, exploded from the glass, and I had difficulty putting it down. The ice cream topping refused to stop as it wafted between my lips.

Palate:  The mouthfeel was thick and creamy. The only flavor I discerned was caramel.

Finish:  Until now, I was a bit disappointed because while the caramel was present, there was nothing salty about it. The good news is, while it did eventually come out, it was not dominating. The entire finish was medium in length.

Bottle, Bar, or Bust:  Ole Smoky Salty Caramel is, simply put, dangerous. If I wasn’t paying attention and sipping right from the bottle, I might plow through the whole thing. Would it make for a good cocktail? Probably. Did it need anything else, including ice? Nope. But it did take a Bottle rating from me. 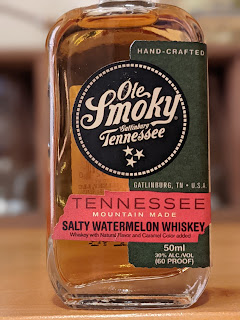 Salty Watermelon is in the fourth position. Much to Mrs. Whiskeyfellow’s horror, I’m not a fan of watermelon. I’ll eat it, but it would be one of the last fruits I’d choose.

Appearance: Light caramel but crystal clear in appearance, Salty Caramel formed a heavy rim with legs that crashed back to the pool of my Glencairn glass.

Nose: This whiskey smelled precisely like a Jolly Rancher watermelon, then somehow included the rind. How is that done? When I pulled the air past my lips, there was no shock when I tasted watermelon.

Palate:  Thick and full-bodied, Salty Watermelon tasted of sugar and watermelon rind. Mrs. Whiskeyfellow taught me if you put salt on watermelon, it brings out the sweetness.

Finish: Short-to-medium in duration, the sugary watermelon remained to the end.

Bottle, Bar, or Bust: In my opinion, Salty Watermelon was closer to flavored rum than whiskey. I believe it was the sugary quality that contributed to this conclusion. Like the Salty Caramel, this one was dangerously easy to drink and good to boot. Because I’m not fond of watermelon, but I do like Salty Watermelon, which will earn it extra points and steal that Bottle rating. 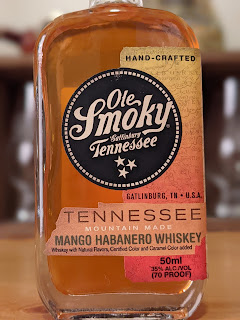 The last in the lineup is Mango Habanero. I left it for last for a specific reason:  I can’t drink it. I’m severely allergic to mango, and the fact these all contain “natural flavors” means I can’t risk a reaction.

Final Assessment:  My favorite of the flavors I tasted was hands-down, Salty Caramel. But the most impressive was Salty Watermelon. I was surprised Peanut Butter came in third. Before tasting any of them, I would have assumed Peanut Butter would have taken the top spot when this whole thing started. There’s nothing wrong with it; just the Salty ones eclipsed it. Cheers!