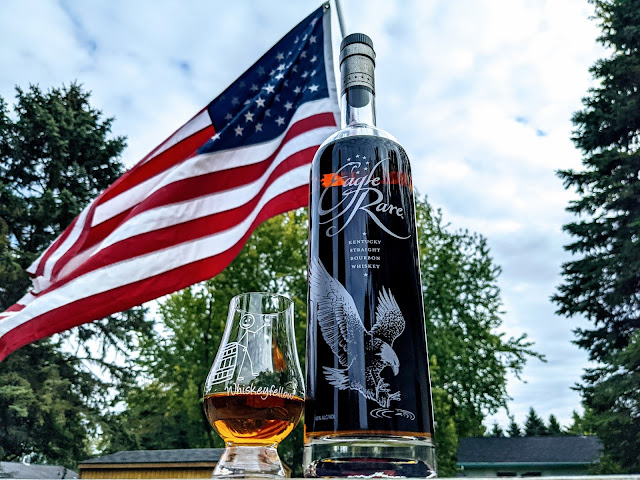 Considering the years I've been penning reviews, I'm often surprised what I've not reviewed.  Not the off-the-radar stuff, not the limited-editions, but the basic, legacy whiskeys that should be the basics of any reviewer's library. Yet, I believe, in my quest to try the overlooked or relatively unknown and #DrinkCurious, I forget the staples out there. One of those is Eagle Rare Bourbon.

Back in 1975, Charles L. Beam was the master distiller at Seagram's. He created a new brand called (you guessed it) Eagle Rare, and it was a vatted 101° whiskey distilled at the Four Roses Distillery. Then, in 1992, Sazerac purchased the brand and started distilling it at Buffalo Trace Distillery in Frankfort, Kentucky.

Sazerac continued to produce Eagle Rare at 101° until 2005 when the whole thing was pretty much revamped. It was no longer a small batch Bourbon and, instead, became a single barrel. The single barrel designation has since been dropped. The proof also changed and was reduced to 90°. That's continued into 2021. It still carries the 10-year age statement, but that no longer appears on the necker. Instead, it was moved to the back label.

"Life, liberty, and the pursuit of happiness - the cornerstones of the birth of a nation, epitomized by the American bald eagle. That notion has come to represent freedom, spirit, and independence of the individual, giving the world products and innovations that are uniquely its own. One such innovation was Kentucky Straight Bourbon Whiskey." - Sazerac

Eagle Rare is made from Buffalo Trace's mashbill #1, rumored to be 75% corn, 10% rye, and 15% malted barley. It should retail for about $35.00. Finding it on the shelf for that price can be challenging but not impossible. More likely, if you do find it, you can expect to pay $50.00 or more.

Is Eagle Rare allocated?  That's a sketchy question. No, not really. But, like Buffalo Trace, folks seem to clear the shelves when they find it. And, some store owners hold it back for either their "best" patrons or for raffles and auctions.

How's it taste? Let's get to that right now.

Appearance:  Poured neat in my Glencairn glass, Eagle Rare was absolutely caramel in color. It formed a medium rim which led to slow, long legs that fell back into the pool of liquid sunshine.

Nose:  Very fragrant even in the glass, fruit just bursts into the air. Berries and cherry are unmistakable. Sweet caramel, brown sugar, fresh leather, and toasted oak are all tucked beneath the fruit. When I pulled the air into my mouth, plum danced across my tongue.

Palate:  Smooth is a descriptor many whiskey nerds hate. But there's really no other word to do the mouthfeel justice. On the front of the palate, I discovered honey, citrus, brown sugar, and vanilla. The middle featured plum, cherry, and berry fruit. Then, on the back, flavors of mint, dry oak, pepper, and clove were quite pronounced.

Finish:  Initially, the finish was concise. But, a second sip proved that wrong, and I experienced a medium-to-long one. It started with plum, then moved to dry, smoked oak. From there, pepper, vanilla, and candied orange peel rounded things out.

Bottle, Bar, or Bust: It is tough to not find Eagle Rare enjoyable. At least, in my opinion, it is a step up from the regular Buffalo Trace and a step below E.H. Taylor. This is a no-brainer slam-dunk Bottle recommendation if you see this for about $30-$45. Once you hit about $50 and above, I'd start second-guessing things. Of course, others would happily pay more; I'm just not in that camp. The takeaway is that there's really nothing not to like with Eagle Rare. Cheers!