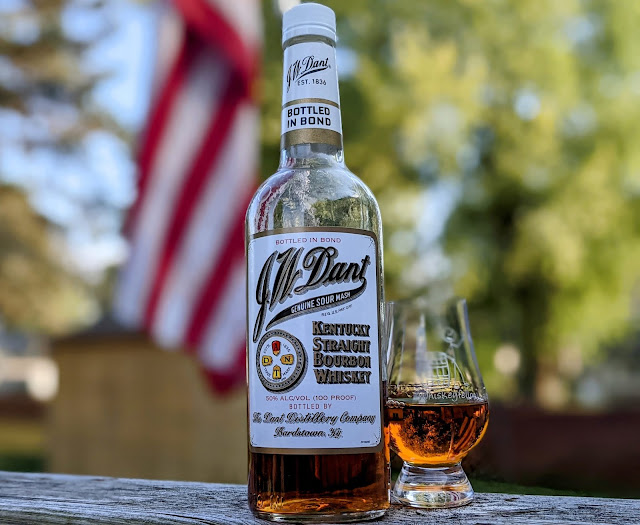 I'm Mr. #RespectTheBottomShelf.  Oh, you may know me as Whiskeyfellow, but before that, I was a fan of that sneered at, overlooked area of the liquor store. Not because I was cheap; instead, there are some real gems there. Generally, I like to keep this stuff a secret because, quite frankly, I'm concerned the distilleries will pick up on it and start ratcheting up the price. An example? Old Fitzgerald Bottled-in-Bond. That was an $18.00 whiskey. For the last couple of years, that's been a $100+ whiskey. Or Heaven Hill Bottled-in-Bond.  It was a $12.00 Bourbon. They ended production, tacked on an extra year, revived it, and now you can pay $50.00 (and it isn't any better).
Here we are, and I'm reviewing another Heaven Hill Distillery product:  JW Dant Bottled-in-Bond. This one is a $15.00 Bourbon; it isn't the easiest to find - not because folks scoop it up like it is allocated, but because it has a more limited distribution. Similar in nature to the original Heaven Hill Bottled-in-Bond, Heaven Hill doesn't even list JW Dant on its website, likely due to that limited distribution.
It begins with the typical Heaven Hill bourbon mash of 78% corn, 12% malted barley, and 10% rye. JW Dant carries no age statement. But, since it is Bottled-in-Bond, we know that it must legally be at least four years old. My suspicion is it is right about that age. And, because it is Bonded, we also know it is 100°, we know it is from one distiller (Heaven Hill) during one distilling season (January to June or July to December) from a single distillery.
Is JW Dant Bottled-in-Bond worth the #RespectTheBottomShelf designation? You know what happens next... it is time to #DrinkCurious and find out.
Appearance:  Poured neat in my Glencairn glass, JW Dant was the color of caramel. It made a fat rim on the wall; it eventually yielded slow, heavy legs that fell back into the pool.

Nose:  The nose was pretty straightforward with corn, vanilla, and oak, but it was accompanied by banana nut bread. When I drew the vapor into my open mouth, it was a vanilla bomb.

Palate:  I found the mouthfeel to be light-to-medium, but there was an oily quality to it. The front of my palate tasted corn, brown sugar, and caramel. As it worked its way across my tongue, vanilla, nuts, and cinnamon took over the middle. The back started with big oak, clove, and pear hidden beneath those.

Finish:  Medium-long in length, the finish featured black pepper, oak, nuts, marshmallow, and apple.  It was a bit strange for it to go from big spice to sweet.

Bottle, Bar, or Bust:  JW Dant Bottled-in-Bond is a reasonably simple Bourbon. For the money, there's good value. You get notes you can actually identify because they're not muted, you get a sufficiently complex finish, and while it isn't the best of Heaven Hill's Bottled-in-Bond bottom shelf program, that shouldn't turn you off. Much of what's in that program is lovely. This one earns a Bottle rating from me. Cheers!