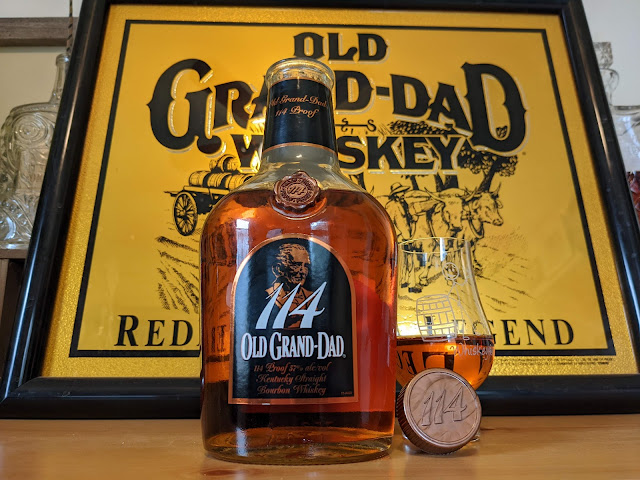 I will go out on a limb and state that anyone who knows even a smidge about American whiskey has heard of Jim Beam. What takes a bit more knowledge is it makes so much more than Jim Beam Bourbon. One of those brands is called Basil Hayden’s.

Who was Basil Hayden? He was a prominent distiller who used an atypically high rye content in his Bourbon. He had a son, Basil Hayden, Jr., who had a son, Raymond Hayden.  Raymond opened a distillery in 1840 called Old Grand-Dad, named for his grandfather, Basil Sr. The distillery was one of a handful allowed to produce medicinal whiskey during Prohibition.

Now, Old Grand-Dad wasn’t originally part of the Beam brand. That didn’t happen until 1987, when National Distillers, one of several owners, sold the brand to Fortune Brands, which later became Beam, Inc. (and later, Beam-Suntory).

Old Grand-Dad 114 is a Kentucky Straight Bourbon distilled from a mash of 63% corn, 27% rye, and 10% malted barley. It carries no age statement, meaning it is at least four years old, yet rumored to be between five and six years old. The “114” comes from this Bourbon’s proof (114°), and prices vary from the low $20s to just under $30.00 for a 750ml package. While the rumor mill suggests nearly every year that this year is the last for Old Grand-Dad 114, it is also easy to find at retail, which is how I acquired my bottle. And, between you and me, I find the talk to be just that.

Just a little bit of trivia: When I’m in a naughty mood, I like to ask folks to look at the back of their bottle and see the Lot Number. I then congratulate them on their find. Old Grand-Dad 114 is always Lot No. 1. You’ll also hear (or read) people refer to this whiskey as OGD114.

Nose: Aromas of corn, toasted oak, caramel, berry, and cinnamon tickled my olfactory sense. When I drew that vapor into my mouth, I discovered vanilla that doused my hard palate.

Palate: A warm, full-bodied mouthfeel introduced my palate to corn, honey, vanilla, and plum. The middle featured nutmeg, that typical Jim Beam peanut, and rye spice. I found toasted oak, cinnamon, and fresh leather on the back.

Bottle, Bar, or Bust:  Old Grand-Dad 114 was one of the first high-proof Bourbons I was introduced to many moons ago. It unmistakably drinks at its stated proof. When you consider the price, this is a heck of a bargain. It won’t blow your doors off, but it is tasty sipped neat. For the record (and nearly the same price), I prefer Old Grand-Dad Bottled-in-Bond, but either is something you should have in your whiskey library. A Bottle rating for sure, cheers!