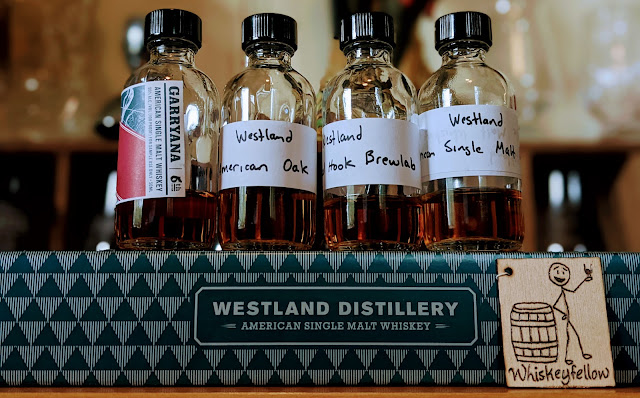 Nestled somewhere in the realm of Seattle lies the Westland Distillery. One of the cool things about Westland is how transparent the distillery is about its whiskeys and, well, everything. Go to the website, and you can geek out over the distillery, cooperage, grains, water source, and anything else you can think of.

Westland is in the process of applying to be a Certified B-Corp company. There aren’t a lot of businesses, let alone distilleries, that are Certified B-Corp. If you think that means it is green-friendly, you’d be partially correct. B-Corp goes far beyond that. The other half is its social policies. Everything must be transparent and set up to do good globally, from accounting to labor, from recycling to low emissions, charitable giving, etc.

Westland does everything in-house. About 90% of its barley is harvested in Washington. It mashes, ferments distills, ages, and bottles American Single Malt whiskeys.

“American Single Malt Whiskey is, by its very nature and existence, innovative. That said, we don’t innovate for the sake of innovation. We remain committed to expressing our provenance, but recognize the opportunity to contribute new ideas to the landscape of single malt whiskey.” – Westland Distillery

Today I’m exploring four Single Malts:  its flagship American Single Malt Whiskey, American Oak, Redhook Brewlab Cask Exchange, and Garryana 6 from its Outpost Range. I appreciate Westland for providing me samples of each in exchange for no-strings-attached, honest reviews. Now, let’s #DrinkCurious and get to it. 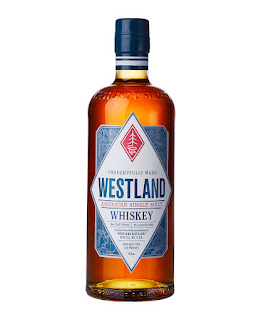 The first player at the plate is Westland’s flagship American Single Malt. It is distilled from six different malted barley strains (Washington Select Pale Ale, Munich, Extra Special, Pale Chocolate, Brown, and Baird’s Heavily Peated) and then aged for at least 40 months in the following woods:

Appearance: The brassy-gold liquid offered a medium rim with thick, sticky tears in my Glencairn glass.

Nose: Aromas of peach, strawberry, orange peel, biscuits, and a kiss of peat filled my nostrils. I found strawberries when I took the air in through my lips.

Palate:  The mouthfeel was silky and full-bodied. Vanilla, nougat, and apple were on the front of my palate, with malted barley on the middle. The back gave up light peat and oak.

Finish:  With a medium-long duration, clove and a drop of smoke embraced the light peat and oak.

Bottle, Bar, or Bust:  In a word, this whiskey is superb. While reasonably uncomplicated, it also didn’t need to be. The cost edges on the high side, but that’s direct from the distillery, and you may be able to acquire it for less. Regardless, it earns my Bottle rating.

The second player on deck is called American Oak. Until recently, it was the flagship single malt for Westland. It is discontinued, so what you find on the shelf is the end of the run. It, too, was priced at $60.00 for a 750ml package.

What’s the difference between the two?  American Oak is distilled from the same mash, sans Baird’s Heavily Peated Malt, and only first-fill ex-Bourbon and new, charred American oak barrels were used. It is also slightly younger, aging for three years.

Nose: A bouquet of apricot, peach, apple, lemon, and toasted oak filled the air. As I inhaled through my mouth, a wave of vanilla rolled through.

Palate:  An oily texture with a medium body led to caramel, vanilla, and orange zest on the front of my palate. Dark chocolate, roasted coffee, and almond were next, with charred oak, clove, and black pepper on the back.

Bottle, Bar, or Bust:  American Oak is good but nowhere near its replacement. On its own, it would be on the higher end of average for an American Single Malt. However, compared to the newer flagship, there isn’t a contest. Considering both are similarly priced, I’d give American Oak a Bar rating.

The third one at the plate is a Washington-state-only release called Redhook Brewlab Cask Exchange. The distillate is the same as American Oak. It aged 39 months in new American oak barrels, then transferred for 48 months to former Bourbon barrels that subsequently held Redhook Brewlab’s Stratosphere Barley Wine with Strata hops. The total aging time is 87 months. The yield from the four casks was 900 50% ABV (100°) 750ml bottles, which sell for $99.99.

Palate: A light-bodied and creamy sensation generated apple, pear, vanilla, and honey on the front of my palate. Date and apricot were next, followed by gingerbread and biscuits.

Bottle, Bar, or Bust:  I am not a beer drinker. I’ve never cared for it. For me, there was significant beerness to this whiskey. It wasn’t bad, but it also wasn’t my thing. I can appreciate the work and age that went into this American Single Malt, and it should come at a premium price. My rating is a Bar.

Batting cleanup is Outpost Range: Garryana 6. The Outpost Range is Westland’s experimental line, intending to go where whiskey has not gone before. In the case of Garryana, it utilizes 25% of its cooperage made from Garry oak, which is native to the Pacific Northwest region. The mash is the same as the American Oak; the woods used are:

Appearance: Served neat in my Glencairn glass, Garryana presented as amber, with a thicker rim and slow, sticky droplets.

Nose: I smelled sherry, raisin, dark chocolate, cherry juice, and pineapple. When I inhaled the vapor in my mouth, I found raisin.

Palate:  An oily texture introduced the front of my palate to apple, apricot, and pear, while the middle suggested Mexican mole sauce (I have never used that descriptor before, but that’s what it tasted like). On the back were brown sugar, molasses, and ancho chiles.

Finish: Long and warming, the finish consisted of raisin, cherry, nuts, oak, and ancho chiles. It had a meaty quality to it, similar to burnt ends.

Bottle, Bar, or Bust:  If I thought the flagship Single Malt was superb, then Garryana would be spectacular. That mole sauce took this whiskey over, above, and beyond the others. There was absolutely nothing to dislike, and while I swallow hard when we get into $175.00 whiskeys, in my opinion, Garryana 6 is worth every penny. A Bottle rating for sure, cheers!