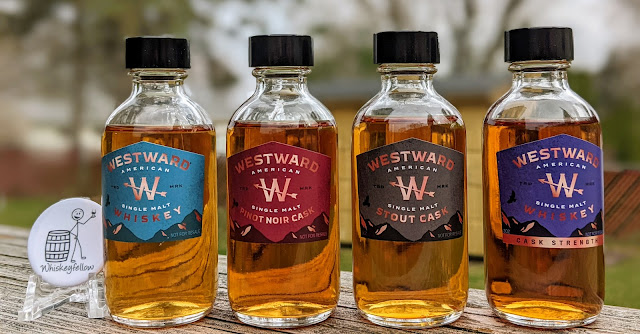 Westward is known for its American Single Malt whiskeys and is a category pioneer. Its philosophy is to brew like a pale ale, distill like an American Single Malt, and age whiskey as a Bourbon. That whiskey is born of locally-grown Metcalf and Copeland two-row barley strains and ale yeasts that spent six days fermenting. Once that’s done, it is distilled twice through 3100-gallon, low-flux copper pot stills.

Its entry proof is 125°, and Krogstad fills new, #2 char 53-gallon American oak barrels sourced from Kelvin Cooperage. The whiskeys carry no age statement but spend over four years in the barrel.  Blended in small batches, its whiskeys are non-chill filtered and naturally colored.

Last month, I had an opportunity to try four of Westward Whiskey’s expressions:  the flagship American Single Malt, its Cask Strength sister, the Pinot Noir Cask Finish, and the Stout Cask Finish.

Before I get to my tasting notes and ratings, I wish to thank Westward Whiskey for providing samples in exchange for no-strings-attached, honest reviews. Let’s #DrinkCurious and discover what these whiskeys are all about, shall we? 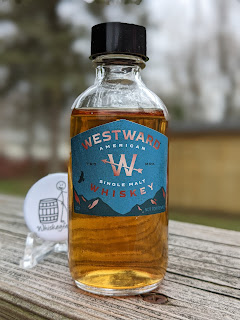 Appearance:  The caramel amber shined through my Glencairn glass. A thick rim released sticky droplets that were in no rush to fall back into the pool.

Nose: A fruity bouquet of cherry, apple, pear, and banana accompanied by sweet vanilla and caramel. When I drew the air into my mouth, the pear dominated.

Palate:  The medium-weighted, silky body offered pine, banana, and vanilla sugar cookies on the front, morphing to orange citrus, pear, and apple on the middle. The back had flavors of toasted oak, cinnamon, and nutmeg.

Bottle, Bar, or Bust:  I found the fruity, sweet combination of Westward’s basic single malt enjoyable, and the price isn’t prohibitive, especially when you consider the time spent in the barrel and its stated proof. I have no qualms issuing my Bottle rating for it. 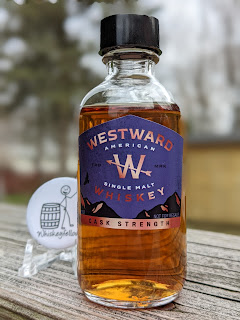 The cask strength version of the flagship Single Malt isn’t truly cask strength. It is more full proof, as Westward sells all of its cask strength whiskeys at 62.5% ABV (125°), so it gets a touch of added water. A 750ml package will set you back $88.99.

Nose: The banana aroma was more robust than the standard release, married with vanilla, apple, lemon, and nutmeg. I found lemon curd as I drew the air into my mouth.

Palate: Whereas the standard release was silky, the texture of the cask strength was oily and full-bodied. The front of my palate tasted lemon curd, date, and vanilla biscuits. Pear, cinnamon, and nutmeg took control of the middle, while black pepper, barrel char, and herbal notes hit the back.

Finish:  Black pepper, cinnamon spice, cocoa, and smoky char remained on the back for an extremely long, warm finish.

Bottle, Bar, or Bust:  Westward’s Cask Strength is, in a word, dangerous. While spicy, it drank way under its stated proof. I found the transition between sweet and spicy enticing, and I could see myself losing control with how easy it went down. Cask Strength earns every bit of my Bottle rating. 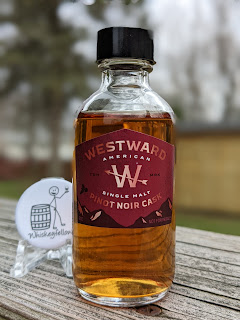 Westward took the standard Single Malt, aged it for 4-1/4 years, and then aged it an additional two years in French oak that previously held Suzor Wines Oregon Pinot Noir. It is packaged at 45% ABV (90°) and costs $82.95.

Appearance: This Single Malt was the color of caramel. A massive rim hugged the wall of my Glencairn glass, only to collapse under its weight and let loose its big, long legs.

Nose: The wine influence came out with plum, cherry, strawberry, and toasted oak. Strawberry jam rolled across my tongue as I pulled the vapor past my lips.

Palate:  An oily, full-bodied mouthfeel released currant, plum, and cherry on the front of my palate. Date, almond, and nutmeg were next, with grape, clove, and toasted oak on the back.

Finish: A medium-to-long finish slowly built from plum and cherry to almond, then dry oak and black pepper.

Bottle, Bar, or Bust: The fruitiness was crazy with the Pinot Noir Cask Finish. I’ve had other Pinot Noir finished American whiskeys, and none have come close to Westward. The spice at the end sewed everything up nicely. Here’s the big problem:  I couldn’t even pick out the alcohol until it was too late and I was already lit.  If I thought the first two were lovely, this incarnation blew those away. A Bottle rating is well-deserved. 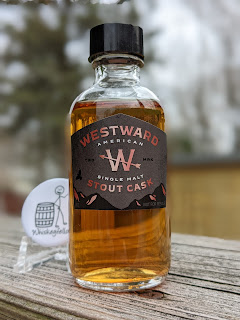 Last but not least is the Stout Cask Finished Single Malt. Westward took its flagship whiskey and stuck it in a barrel for another full year that previously held its whiskey before housing aged stout. This one weighs 46% ABV (92°), and a 750ml package runs $82.99.

Appearance: Poured neat in my Glencairn glass, the Stout Finish looked copper. A medium rim yielded fat, heavy legs that fell back to the bowl.

Palate: The mouthfeel began soft and airy before becoming creamy on the second sip. Citrus, milk chocolate and coconut teased the front of my palate, while vanilla, nutmeg, and almond covered the middle. The back featured cinnamon, coffee, and oak.

Bottle, Bar, or Bust: I appreciate what Krogstad did with the Stout Cask Finish. However, I’m not a beer drinker, and this was very much beer-like. If you’re like me, you’ll want to try this one at a Bar first.

Final Thoughts:  My favorite was easily the Pinot Noir Cask Finish, followed by the Cask Strength, then the flagship Single Malt. That left the Stout Cask Finish to bring up the rear. Really, the Pinot was amazeballs. That’s not to discount the quality of Cask Strength; the two were just in different universes.

I’m impressed with what Westward has done and look forward to future tasting opportunities. Cheers!