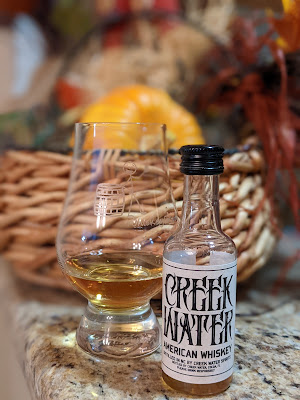 I often stumble across something I’ve never seen or heard of. There was this mini bottle bin. Inside was a bottle of Creek Water American Whiskey. What’s that?

“From the mind of Slumerican founder and global recording artist Yelawolf, Creek Water is a whiskey company breaking through traditional barriers. Our grassroots approach fosters a bond with a loyal family of fans who love to live wild at heart.

With grit and with style Creek Water is the brand that gives no apologies … just great whiskey!!” – Creek Water Spirits

I’m unfamiliar with Yelawolf, but “celebrity whiskeys” have a habit of being mediocre. Now and then, there’s a gem, but like precious stones, they’re rare. Let’s read on:

So, is Creek Water carefully crafted? The only way to find out for sure is to #DrinkCurious.

Appearance: This whiskey was the color of golden straw. It formed a medium rim that released husky, slow legs that fell back to the pool.

Nose: Hmmm.  It smells a bit like buttered popcorn, but not really. Could it be vanilla taffy? Not really. It is sweet. It is chemical-like. When I drew the air into my mouth, there was no change.

Palate:  It is as if some artificial intelligence (think Skynet) decided to try its hand at distilling. Normally I’d try to define the texture. I can’t. Why? While I’ve never poured a glass of Fabuloso before, this is what I imagine it tastes like. I’m worried about what this is doing to my palate. Flavors? There’s super-concentrated black pepper, but it is so industrial I can’t tell.

Finish: Egad. I believe that I’ve been transported to the Gates of Hell by ingesting this whiskey. Not by Scotty, but dragged by YelaEyes from Supernatural. I can already feel the hangover.

Bottle, Bar, or Bust:  Every so often, I come across something so godawful there’s no point in trying to be nice about it. Creek Water American Whiskey is offensive. Simply put, I’d rather have a root canal without anesthesia than ever drink this again. It is undrinkable. Do I really have to say it? A Bust rating might be a compliment for this dumpster fire. Avoid it at all costs.

By the way, Yelawolf, you owe me an apology.