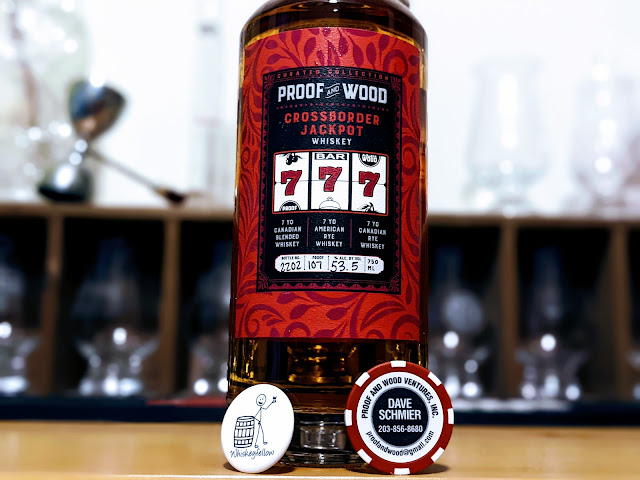 Dave Schmier is no pigeon. If you’re unfamiliar with him, he’s one of the originals who sourced better barrels from MGP and bottled something special.  If you’ve heard of Redemption, that was his brand. He sold it in 2015. He’s since created Proof and Wood Ventures.  He runs a hot table. Of all the whiskeys from Proof and Wood that I’ve tasted, most have been not only good but excellent (for the record, he also does rum). There’s been an occasional tap-out, but the odds have been against that, except…

I am not a fan of Canadian whiskies. I’m trying; believe me, I am. I have been buying and trying Canadians to find something acceptable to my palate.

Crossborder Jackpot is two-thirds Canadian. The distilleries involved are undisclosed, but the mash of the Canadian blend is 97% corn, 2.7% rye, and 0.3% malted barley. The Canadian Rye is 91% rye and 9% malted barley. Both aged seven years in former Bourbon barrels.

The wild card in the blend is a typical 95/5 MGP American Rye recipe that rested seven years in new, charred oak. It is packaged at 107°. The idea here is that seven is a big deal.

Dave is obviously going all in and hopes Crossborder Jackpot hits all lucky sevens. Is it a winner or a bad beat? Let’s get past what’s on the label, #DrinkCurious, and let the chips fall where they may. Proof and Wood sent me a sample and is familiar with the terms and conditions requiring a no-strings-attached, honest review.

Appearance: The ante was a neat pour in my Glencairn glass. Crossborder Jackpot showed as dirty blonde. A thin rim formed that released massive tears, which crashed back into the pool.

Nose: If you hedged about this whisky’s rye content, it was confirmed by the floral notes exploding from my glass. Vanilla, toasted oak, mint, and cinnamon were easy to discern. When I pulled the air past my lips, minty vanilla rolled across my tongue.

Palate:  The texture was incredibly silky, but it was weighty at the same time. The front of my palate picked out vanilla, caramel, and red currant. The back doubled down on spice with rye, cinnamon, and clove. The middle? It was transitionary with sweet corn, nutmeg, and oak.

Bottle, Bar, or Bust:  This whisky is certainly a gamble, at least for my palate. I enjoyed the way everything with this whiskey went from sweet to spicy. The mouthfeel was enticing. The palate offered fascinating flavors. I savored the long, spicy finish. In the case of Crossover Jackpot, the payoff is a Bottle rating. Cheers!