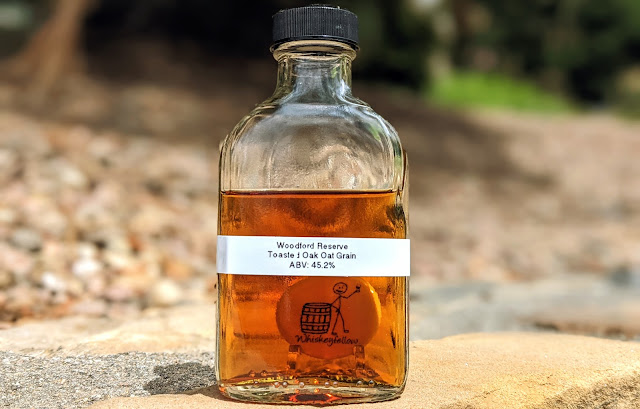 In the heart of horse country lies one of the most beautiful distillery campuses you’ll come across. Founded in 1812 as the Oscar Pepper Distillery, then the Labrot & Graham Distillery, Woodford Reserve is one of the flagship properties owned by Brown-Forman starting in 1941, then sold off in the 1960s, only to be repurchased in 1993. The Woodford Reserve brand was launched in 1996.

Since 2015, Woodford Reserve has been tinkering with unusual whiskeys. Some, like Double Double Oaked, have been released mostly annually. Others are one-and-done whiskeys.

“Experimenting with new ways of making Woodford Reserve is one of my favorite parts of my job. It allows us to explore new flavors with our bourbon.” – Chris Morris, Master Distiller

Woodford Reserve Toasted Oak Oat Grain is part of the distillery’s annual Distillery Series release. It is made from fully-matured Woodford Oak Bourbon that was dumped into and finished in a new, heavily-toasted barrel for an undisclosed period—packaged at 90.4° in 375ml bottles, which is available at the distillery and “select Kentucky retailers” for $59.99.

I must thank Woodford Reserve for supplying me with a sample of this limited-release whiskey in exchange for a no-strings-attached, honest review. Let’s #DrinkCurious and taste what this is all about.

Appearance: Poured neat into a Glencairn glass, this whiskey presented as deep chestnut. It left a medium-thin rim that released fast tears back into the pool of liquid sunshine.

Nose: This was an experience of mixed fruits and baked goods: oatmeal cookies, brown sugar, and cinnamon powder blended with plum and black cherry. As I drew the vapor past my lips, it was like a puff of cocoa popped in my mouth.

Palate: An oily texture greeted my tongue, and the front of my palate encountered a blast of spice that featured clove, big oak, and orange peel. I tasted nutmeg, brown sugar, and oatmeal in the middle, while the back offered cinnamon spice, chocolate, and char.

Finish:  The finish was medium-to-long and had flavors of clove, cocoa, chocolate, toasted oak, orange peel, and black cherry.

Bottle, Bar, or Bust:  I’ve had oat whiskeys before and have yet to find one undesirable. I’m not sure what the oat adds, but whatever it is, I believe it should be included more often. Woodford Reserve Toasted Oak Oat Grain is an unusual pour, especially with the spiciness you don’t expect from this distillery. Is it pricey? Yeah, especially when you do the math and figure the 750ml cost. But it is also worth drinking, and if you can get your hands on a Bottle, just do it. Cheers!