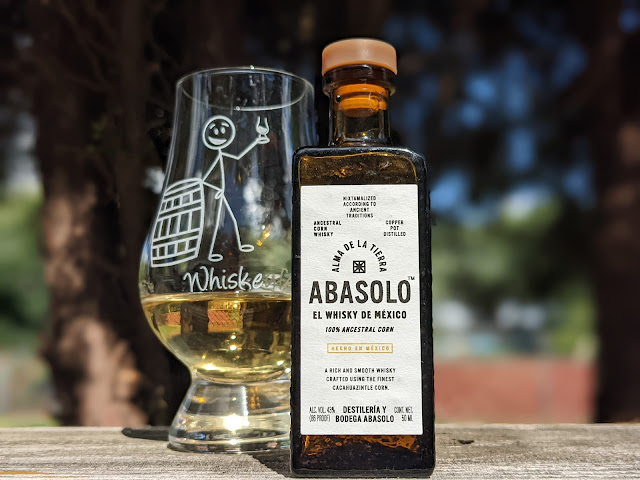 It is always exciting for me to explore a new-to-me whiskey region. When that happens, I’m going in completely blind because, well, it is uncharted territory.

“Abasolo El Whisky De Mexico is crafted and distilled from 100% Mexican Cacahuazintle (kaka • wha • SINT • lay) corn, which has been cultivated and passed down for more than 200 generations by local farmers for its distinct, extraordinary flavor.” – Distileria y Bodega Abasolo

If you’re like me, you’re doing math in your head and thinking how many centuries 200 generations might encompass. Forget it. You’re talking about 4000 years!  Corn has its birthplace in Mexico, and people have been harvesting and cooking it for longer than that. As you can imagine, the corn from back then was much different from today’s crop.

The Cacahuazintle variety is non-GMO and has large, bulky kernels. It is grown at an elevation of at least 7000 feet. That corn is then divided into two lots – a small one that malts the corn and the second that isn’t. Then, both lots of the corn are cooked.

The technique used to make Abasolo is called nixtamalization.  Basically, the corn is treated with lime, cooked, dried, and pulverized to make flour – the same flour you would use to make tortillas.

Distileria Abasolo then allows a 120-hour fermentation cycle, followed by a double-distillation process using copper pot stills. From there, it is placed in both new and vintage toasted oak casks for an undisclosed period. The final result is a whisky that is bottled at 43% ABV (86°). You can expect to pay $40.00 for a 750ml package. I found a 50ml bottle at some random liquor store for a few bucks.

Are you ready to embark on this adventure with me? Let’s #DrinkCurious and discover what it is all about.

Appearance:  A neat pour in my Glencairn glass revealed a liquid the color of golden straw. A medium rim created a mix of watery tears and sticky globs that remained on the wall.

Nose: I would have assumed corn would be the first aroma to hit my nostrils, but it wasn’t. Instead, it was lime and marshmallow. That was undoubtedly a different combination, that’s for sure! Then the corn hit, but it wasn’t typical corn. It was more like if you grilled the corn over a campfire. Beyond that, I sampled fried plantains. When I drew the air through my lips, I could taste that grilled corn.

Palate:  As this whisky rolled across my tongue, it had a light, oily texture. On the front, I tasted lime and fried plantains.  The middle featured roasted corn with a punch of what I could swear was Tequila Blanco (it had that agave and white pepper quality). The back offered toasted oak, fresh leather, and sweetcorn.

Bottle, Bar, or Bust:  I don’t like tequila. That’s why I’m not Tequilafellow. However, the notes of tequila mid-palate were mild and, for whatever reason, just fit with the rest of this whisky. Abasolo El Whisky De Mexico is definitely off the beaten path. It captivated my attention, plus it is affordable. That’s a recipe for a Bottle rating. Cheers! 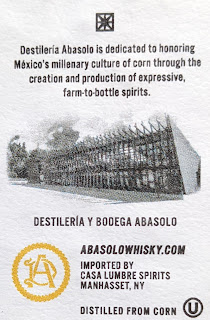