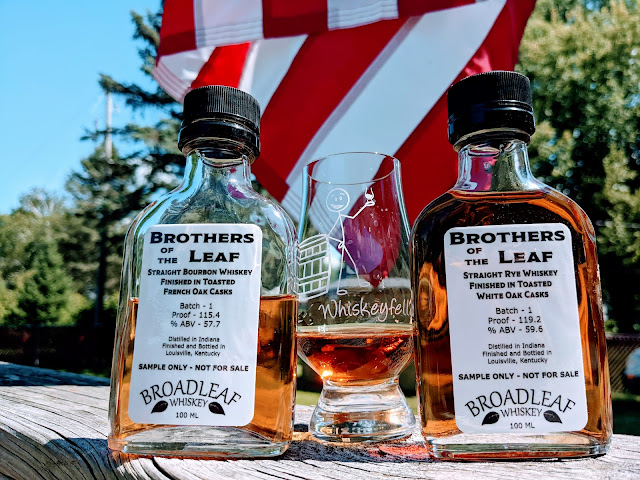 One thing that isn’t unusual these days is the birth of a new whiskey brand. They seem to pop up all over, and many come with a lofty hit on the wallet. How can you, as a consumer, tell if it is worth taking a risk on a bottle?

Thankfully, we have these people called whiskey reviewers. And, lucky for you, I happen to be one! I do that #DrinkCurious thing for you and help eliminate that risk.

Today I’m introducing you to two whiskeys from Broadleaf Whiskey, one is a Bourbon and the other an American Rye, and they are called Brothers of the Leaf. What’s with all the leafiness?

In full disclosure, I am a friend of Brian’s. I’ve known him for several years (although we’ve never met in person). He and I are both members of The Bourbon Mafia, as is Co-Founder J. Paul Tucker, the owner of Oxmoor Smoke Shop in Louisville.

I always promise you that no matter my relationship with any brand or its owners, there is always a no-strings-attached, honest review whenever I’ve been provided a sample.

Here’s what I am not: a cigar enthusiast. I’m not even a beginner. I don’t smoke cigars and have no desire to do so, but I appreciate good cigar blends.

These two whiskeys have some things in common. First, they’re sourced from Ross and Squibb Distillery (formerly MGP). Second, they’re both finished in barrels from Kelvin Cooperage. Third, they’ll be available in late August at select Kentucky retailers and BourbonOutfitters.com, and each 750ml bottle will run $89.99. Neither carries an age statement.

I’m getting ready to taste the Bourbon first, but before I do that, I must thank Broadleaf Whiskey for providing me with both of these samples. 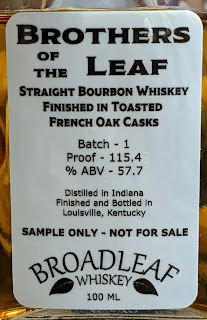 Appearance:  Poured neat in my Glencairn glass, the bronze liquid formed a thick rim. Many heavy tears fell back to the pool but left behind sticky droplets.

Nose:  Caramel and tobacco (I swear this wasn’t subliminal) rose from the neck of the glass, followed by toasted oak and plum. A waft of tobacco leaf hit my tongue as I pulled the air past my lips.

Palate:  A heavy, oily texture coated my mouth. French oak and tobacco exploded in my mouth, making me think of the cigars my Dad used to smoke. The middle tasted of bitter coffee, dark chocolate, and caramel, while barrel char, smoked meats, and clove rounded things out.

Bottle, Bar, or Bust:  Not being a cigar smoker (I said that, didn’t I?), I don’t know what kind of whiskey would pair well, but I can say that this Brothers of the Leaf Bourbon was very cigar-like. And, as someone who enjoys cigar blends, it honestly reminded me quite a lot of Jos. A. Magnus, which I enjoyed and was about $20.00 more than Brothers of the Leaf. I’m happy to offer a Bottle rating on it. 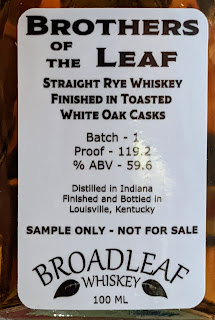 Appearance:  A neat pour of reddish amber filled my Glencairn glass. A heavy rim collapsed under its weight and dropped a curtain of tears.

Palate: A creamy, medium-weighted texture led to thick vanilla, caramel, and leather on the front of my palate. The middle was more straightforward with rye spice and mint, while the back offered flavors of cinnamon, smoked oak, and tobacco leaf.

Bottle, Bar, or Bust:  To suggest that Brothers of the Leaf is a typical MGP rye would be disingenuous. Perhaps the toasted white oak is the differentiator, but you could have told me this Rye had aged in a bota bag, and I wouldn’t have blinked. Regardless, I savored the leather notes and believe you would, too, whether or not you planned to pair it with a cigar. That means it has earned my Bottle rating. Cheers!