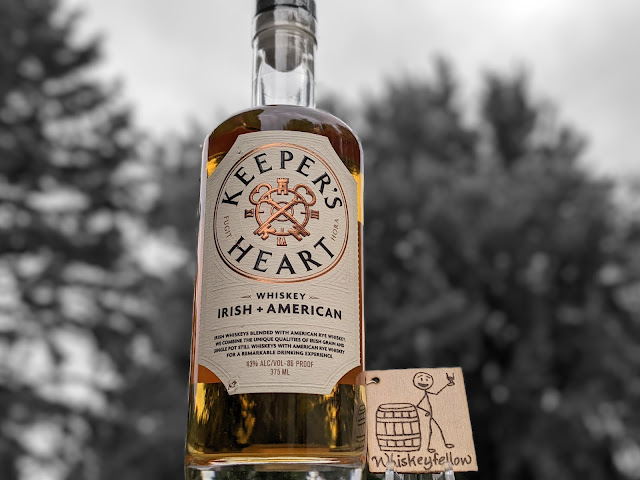 Blended whiskeys can be a ton of fun. I hold a deep respect for good blenders. They take several things and create something remarkable from them. The trick is mapping out the journey to get to the desired result. That assumes that the blender isn’t simply taking mediocre whiskeys and attempting to salvage them.

It isn’t uncommon to create Scotches, Irish whiskeys, or American whiskeys from blends. What is less so is taking whiskeys from various countries and blending them. Such is the case with Keeper’s Heart Whiskey by O’Shaughnessy Distilling of Minneapolis, Minnesota. Its Master Distiller, Brian Nation, is formerly of the famed Midleton Distillery of Ireland.

“Several years ago cousins Patrick and Michael O’Shaughnessy, along with Michael’s father Gerry, were sharing a bottle of whiskey. It was the end of a long and joyous day at an O’Shaughnessy family reunion, where hundreds of relatives traveled from around the world to spend time together. They were reflecting on the importance of family; on how to make sure future generations stayed connected; and on the legacy they wanted to leave.

As conversation went deeper into the night and more whiskey was poured, they had a realization: the answer was in the glass. It was at that point they set out to create a whiskey that celebrated their Irish-American heritage, that built a way for friends and family to connect today and left a legacy for future generations.” – Keeper’s Heart Whiskey

Keeper’s Heart has three offerings:  Irish + American, Irish + Bourbon, and a 10-Year Single Malt Irish Whiskey. If you’re curious about the difference between the first two, the “American” refers to American Rye.

I will approach my review of Keeper’s Heart Irish + American a bit differently because I have the tools to do something special. I will start with tasting notes for each of the three components and then the notes and rating for the packaged whiskey. Doing that is something I’ve not had an opportunity to do before, and as such, I’m excited.

But, before I start this adventure and #DrinkCurious, I must thank O’Shaughnessy Distilling for the component samples and the final product in exchange for a no-strings-attached, honest review. Now, let’s get to it. 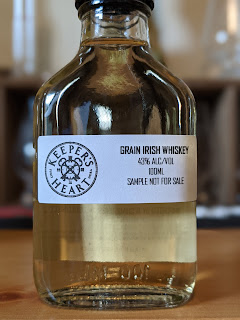 The first component is an Irish grain whiskey which comes from a blend of maize (corn) and malted barley. It aged for four years in refilled American oak (Bourbon) barrels and diluted to 43% ABV (86°).

Appearance: This is the lightest color of the three components, presenting as pale straw. A medium rim formed on the wall of my Glencairn glass, creating heavy, fast legs that fell back to the pool while retaining sticky droplets.

Nose:  Buttery popcorn, pear, and malt notes were easy to pick out. We don’t know how often the cooperage was refilled (three is usually the maximum), but there was no evidence of it on the nose. Vanilla and sweet corn were in the air that I brought into my mouth.

Palate: An airy mouthfeel offered up vanilla and sweet corn on the front, with citrus peel and caramel in the middle. The back was a combination of oak and cinnamon Red Hots.

Finish: As light as this whiskey was, the finish wasn’t giving anything up. It remained spicy with the cinnamon Red Hots, tempered slightly with rich vanilla. It lasted far longer than I would have imagined. 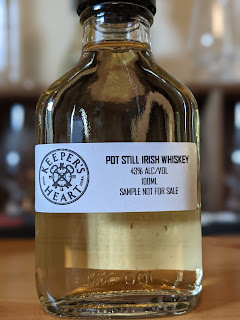 The second component is a Single Irish Pot Still whiskey, made from a mash of malted and unmalted barley. It also aged four years in refill American oak (Bourbon) barrels and was proofed to 43% ABV (86°).

What, exactly, is Irish Pot Still whiskey? The requirement is it contains at least 30% unmalted barley and at least 30% malted barley, and the balance may be other unmalted cereal grains, but no more than 5% of those other grains may be included. The distilling process must be performed via a pot still. The “single” portion refers to the mash coming from a single distillery rather than blends from multiple distilleries.

Appearance:  In my Glencairn glass, the Single Pot Still component was slightly darker than the grain component. The rim was delicate, collapsing instantly with thick, slow legs.

Nose:  The smell of barley jumped from the glass to my nostrils. A malted portion was evident, but the unmalted barley stole the show—Vanilla and orange peel combined with nutmeg and peach. I could pick out what I swear was oatmeal. The air I pulled into my mouth was all citrus.

Palate:  Thin with an oily texture, the first things tasted were vanilla, apple, and pear. As it moved to the middle, I found peach, orange peel, and pineapple, while the back had flavors of nutmeg, toasted oak, and malt.

Finish:  Peach lingered into the finish, as did the toasted oak and nutmeg. The oak turned dry, and the whole thing lasted for a medium-long duration. 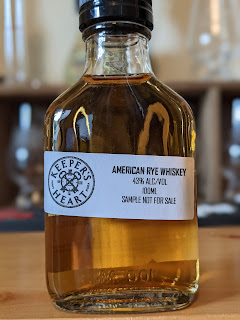 The final component is an American Rye made from 95% rye and 5% malt. I assume the source is MGP (now Ross & Squibb), and the distillate rested in new charred oak barrels for four years. Like the others, it was proofed to 43% ABV (86°).

Appearance:  As you’d completely expect, the American Rye was far darker in my Glencairn glass, appearing as an orange amber. A thin-to-medium rim released a curtain of thick legs.

Nose: It smelled minty, with black cardamom and fennel. A deeper exploration found plum, nutmeg, and oak. When I inhaled through my lips, I discovered fennel and oak.  At this juncture, I should point out that I am not a fennel fan. But we’ll see where this goes.

Palate:  A very oily texture led to black cardamom, cinnamon, and nutmeg on the front with floral rye and plum. Dark chocolate, charred oak, and fennel sewed up the back.

Finish: Fennel remained on the finish, overwhelming other flavors that could have stood out. A deep search found cinnamon, plum, cherry, and charred oak. It was medium-to-long in duration.

I will interject that if I were involved in a barrel pick, I would have rejected this sample. I was not a fan of this rye. However, this is one blend component; let’s see what happens.

Those three components are then blended to produce Keeper’s Heart Whiskey. As you’d guess, it is bottled at 43% ABV (86°), and a 750ml package will set you back about $33.00. It should be interesting to taste how this fits together. The Irish whiskeys and the American component couldn’t be further apart in the flavor universe.

Now that I’ve followed O’Shaughnessy’s map, I’m excited to dig up the chest and taste the pirate’s booty.

Appearance: Served neat in my Glencairn glass, Keeper’s Heart had the look of polished gold. The thin rim could not sustain the weight of its legs, which flowed down like a curtain back to the pool.

Nose: A flowery bouquet wafted from the glass and hit my olfactory sense. Apple, strawberry, nutmeg, and mint followed. I allowed the air to enter my mouth, and in doing so, I encountered vanilla and apple.

Palate:  Despite any of the components, the mouthfeel had a creamy quality. Apple, lemon peel, and nutmeg formed the front. The middle had flavors of peaches and cream joined with Nilla wafers.  I tasted candied ginger, cardamom, and charred oak on the back.

Finish:  Cinnamon Red Hots from the grain whiskey came from nowhere, as did a hint of fennel from the Rye. Charred oak also had a drying effect in my mouth, creating what I describe as pucker power. The dryness subdued the Red Hots, leaving behind nutmeg and a kiss of lemon peel.

Bottle, Bar, or Bust: While there was evidence of fennel, it was nowhere near as dominating as the Rye had. I was fascinated how these three components were recognizable in the final product yet transformed into something unique that those individual components lacked. It demonstrated what blending is all about. Keeper’s Heart Irish + American should appeal to American Rye drinkers, but it is off-profile for Irish whiskey fans. It was stuck between the two, and as such, it earns a Bar rating from me. You’ll want to try this one for yourself before committing to the relationship. Cheers!