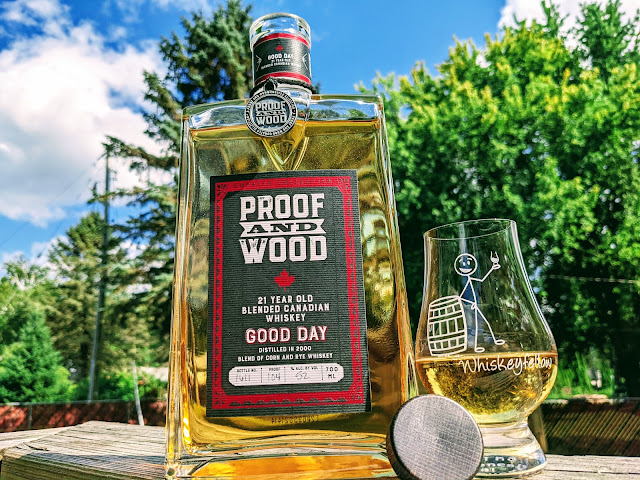 What does Canada require for its whisky to be considered Canadian? Many people get this one wrong – and I used to be one of them. I used to believe the rules were fast and loose. I was schooled by none other than Davin de Kergommeaux, a respected whisky author who, in 2009, founded the Canadian Whisky Awards and is one of the most respected gurus regarding Canadian whiskies.

Canadian whisky must begin with the mashing and distillation of cereal grains (corn, rye, wheat, etc.). It must age at least three years in small cooperage – less than 700 liters), all of which must occur in Canada. It can have added flavors – up to 9.09% and can have added caramel coloring (e150A). The added flavors must be from a spirit at least two years old or wine. Contrary to popular belief, not a single grain of rye must be used for a Canadian whisky to be called Rye.

Them are the rules.

Something else you need to know is my bias when it comes to Canadian whisky. Simply put: I don’t like it. I want to like it. I’ve been on a mission to find an enjoyable one for several years. The closest I have come to is the Gray and Gold Labels of Barrell Seagrass. Yet, those are so unusual (and expensive) I don’t even count them as a win.

So, here I am, once again, staring at a bottle of Canadian whisky and wondering if this will be the one that changes my mind. It is a unique bottle containing a 21-year-old blend called Good Day. Good Day comes to us from Proof and Wood Ventures out of Bardstown, Kentucky. I’ve reviewed several whiskies from Proof and Wood. It was founded by Dave Schmier, the gentleman who started Redemption Rye. Dave has a habit of finding stunning barrels, mainly from MGP (now Ross & Squibb). If there was something in the United States called a Master Blender, you’d have to hand that title to him.

Good Day began with corn, rye, and barley whiskies, each distilled in 2000 or later and sourced from the Lethbridge distillery in Alberta. If you know your Canadian distilleries, that would be Black Velvet.

You may notice that I used the word “whiskies” because that’s how things are done in Canada. One grain is distilled and aged before being blended with others. Eight barrels were used, making the final formula 97% corn, 2.7% rye, and 0.3% malted barley. Dave then took that concoction, brought it to Bardstown, and finished it for an additional three weeks in vintage American Rye barrels.

Before I begin this adventure, I must thank Proof and Wood for providing me a sample of Good Day in exchange for a no-strings-attached, honest review. Time to psych me up and #DrinkCurious.

Appearance:  In my Glencairn glass, Good Day looked like pale straw. That may seem strange for a 21-year whisky until you remember the rules of Canadian whisky and the penchant for using vintage wood. A nearly invisible rim was formed, yet the thick, wavy legs were easy to see.

Nose:  The very first thing I smelled was green apple. Not Jolly Rancher green apple, but the kind you cut up and put into a pie. Corn and vanilla were present, along with floral rye. As I drew the air into my mouth, I found honey and more green apple.

Palate: A thick, syrupy texture filled every crevice in my mouth. Raw honey, vanilla, and brown sugar were introduced on the front. Caramel-covered apples formed the middle, while the back featured cinnamon, clove, and oak.

Finish:  A freight train finish left cinnamon spice and clove all over my tongue and throat. Except for those extensive spice notes, there is nothing in terms of burn to contend with.

Bottle, Bar, or Bust:  I’m going to do something I’ve never done before. I’m going to congratulate Proof and Wood. You have finally ended my quest for an affordable, drinkable Canadian whisky. Yeah, in this case, $99.99 is “affordable” when you consider it is 21 years old. I’ve paid far more than that when it comes to similarly-aged Scotch, and that becomes almost a Walmart price when you bring Bourbon into the picture. Today was a good day to drink Good Day, and it snags my Bottle rating. Cheers!