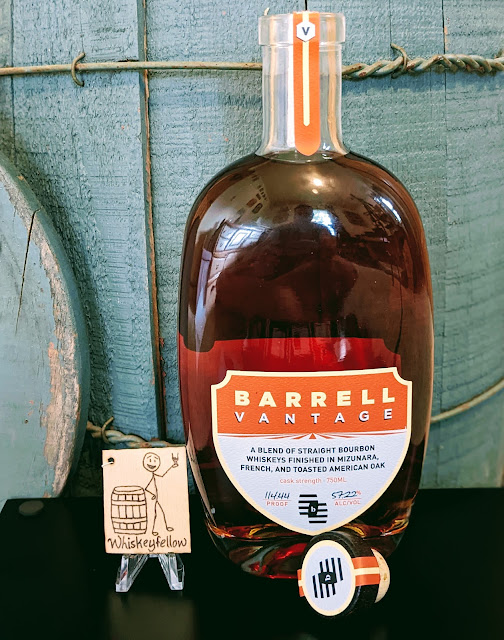 There’s been a recent craze for finishing whiskeys in Mizunara casks. Mizunara is a native Japanese wood that does a fantastic job of retaining moisture. However, it is a challenging wood to work with:

“The oak does not grow straight, it has a high moisture content, and it’s much more porous than other varieties, he says. These issues make the casks prone to leaking. Its name, after all, translates to ‘water oak.’” - Hirotsugu Hayasaka, former head cooper at Nikka

In more modern times, the Mizunara trees are a protected species. First, the tree must be about 200 years old to be suitable for carving staves. Secondly, the yield of usable wood is meager compared to its European and American counterparts. Thirdly, you can’t harvest a live Mizunara tree; it must be naturally felled.1

Barrell Craft Spirits has just released Vantage, a blend of straight Bourbons finished in Mizunara, French, and toasted American oak casks. All three finishing cooperages were virgin oak, so nothing but wood would impart its flavors to the whiskey. As with many of Barrell’s American whiskeys, it has sourced distillate from Indiana (MGP/Ross & Squibb), Tennessee (George Dickel), and Kentucky (Jim Beam).  Each component of Bourbon was finished independently and blended together in Louisville, Kentucky.

“Barrell Vantage is a bourbon dedicated to the arts of barrel selection and blending. We drew upon our years of blending expertise, creativity, and testing to create a bourbon with impeccable balance and depth of flavor that embraces different char and toast levels, along with its oak origins. Barrell Vantage is an exciting step forward in our never-ending journey to take Bourbon to new heights.” – Joe Beatrice, founder of Barrell Craft Spirits

Vantage carries no age statement and is packaged at 114.44°. A 750ml bottle has a suggested price of $89.99 and is available in 48 states. That price puts it in line with most of Barrell’s standard releases.

Now that you know its background, it is time to #DrinkCurious and discover what this Bourbon is all about and if it is worthwhile. But, before I do, I will shout out to Barrell for providing me a sample of Vantage in exchange for a no-strings-attached, honest review.

Appearance: Poured neat in my Glencairn glass, Vantage presented as oiled brass. A microthin rim formed, leading tiny tears to fall back into the pool.

Nose: A bouquet of toasted coconut, pineapple, cumin, cinnamon, and clove tickled my nostrils. When I pulled the air into my mouth, a strong sense of caramel engaged my tongue.

Palate:  An incredibly oily texture provided a weighty mouthfeel. I tasted caramel, vanilla, and Cinnamon Toast Crunch on the front of my palate. The middle featured plum, coconut, ginger, and cocoa powder, while the back dispensed coffee, clove, and allspice flavors.

Finish: Vantage possesses one of those freight train finishes that plows through and runs for miles. Allspice was the highlight; however, the plum, coconut, Cinnamon Toast Crunch, and ginger weren’t derailed.

Bottle, Bar, or Bust:  I’ve never had a Mizunara-finished whiskey before today. I can’t swear that most of this experience is directly related to that wood, as there are two others to contend with, but let’s say that I’m curious about tasting others. The coconut flavors came through hard, and while that’s something that isn’t overly unusual with whiskeys, to have it as prominent as Vantage offers is.

Vantage is also surprisingly easy to sip despite its proof. There is undoubtedly a spicy component to this Bourbon, but no alcohol burn, which many folks will appreciate. However, it also sneaks up on you because there is no warning of it coming before it hits. I’ve been delighted with many of Barrell Craft Spirits' offerings as of late, and Vantage is no exception. I’d happily fork over the $90 to have this Bottle in my library. Cheers!