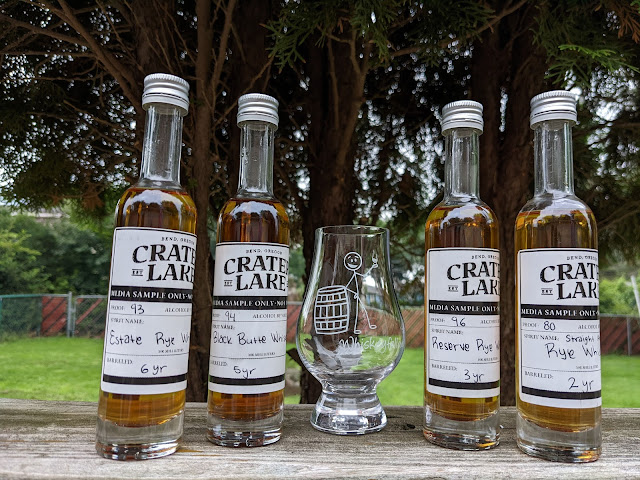 There is more to whiskey than just what’s poured into your glass. If you go beyond the backstories, many of which are nothing more than entertaining tall tales, there’s the process behind the whiskey, the people who make things happen, and the values and mantras those people consider essential.

“Anyone can create a quick and dirty spirit. Luckily, we’re not just anyone. At Crater Lake Spirits, we know that our intense commitment to quality, taste, and sustainable practices means we’re not going to be everybody’s top choice. And that’s ok.

We’re here for the spirit enthusiasts who care about what they’re drinking, how it’s made, and its impact on the planet. By purchasing Crater Lake Spirits, it shows that you share our goal of doing right by our employees, our community, and our shared future.” – Crater Lake Spirits

Crater Lake is big on sustainability and focuses on three areas: materials, facilities, and community. The glass used is made of at least 30% recycled materials, the plastics for 50ml bottles at 25% or more, and the ink is all plant-based, making their bottles 100% recyclable. Packaging is 100% recyclable and uses at least 90% recycled materials. The facilities are using water and electricity responsibly and recycling them whenever possible. And, with an eye on the community, they reuse returned packaging from customers, offer employees 24 hours of paid volunteer time, and participate in roadside cleanups.

Founded by Jim Bendis in Bend, Oregon, in 1996, the craft distillery boom hadn’t yet happened. There were fewer than 20, whereas today there are close to 2000! In 2005, he founded Bend Spirits to offer private-label spirits. And in 2015, he created Ablis, a CBD-based beverage.

Today I’m sampling four whiskeys from Crater Lake:  Estate Rye Whiskey, Black Butte Whiskey, Reserve Rye Whiskey, and Straight American Rye.  I’ll be sipping these in order of proof, from low to high, which I recommend whenever you do more than a couple of pours.

Before I get to my tasting notes and recommendations, I wish to thank Crater Lake Spirits for providing me samples of each in exchange for no-strings-attached, honest reviews. It will be a #DrinkCurious adventure. 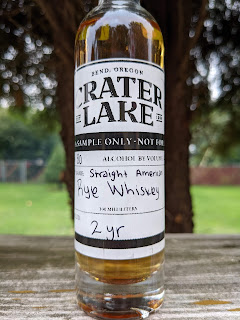 The lowest proof is the Straight American Rye Whiskey. It is made from a mash of 100% rye and aged in new, charred American oak for two years. It is packaged at 80°, and a 750ml bottle costs about $27.99.

Appearance: Poured neat in my Glencairn glass, this two-year Rye presented as a light gold. A thin rim formed a wavy curtain that dropped down my glass wall.

Nose: Rye spice was easy to pluck from the glass, as were toasted oak, stone fruit, and vanilla. When I drew the air past my lips, I tasted toasted oak.

Palate:  The texture was watery, yet the palate was flavorful, with vanilla, caramel, and nutmeg on the front and milk chocolate and toffee in the middle. The back was peppery with rye spice, clove, and oak.

Finish:  Clove, toffee, and oak stayed for a medium-length finish.

Bottle, Bar, or Bust:  The Straight American Rye Whiskey was an easy sipper for sure. I believe there’s a tightrope to walk to younger Ryes, not to have the flavors become too sharp but still maintain the classic Rye experience. This Rye might be proofed down a bit too much for my liking, but it could be a great toe-dipping whiskey for someone interested in 100% rye mashbills. My recommendation is to try this one at a Bar first. 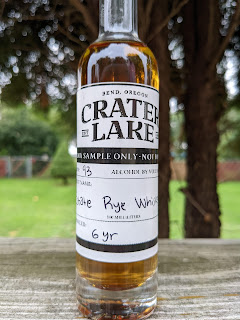 Next up is the oldest of the quartet:  Estate Rye Whiskey. It is farm-to-bottle, meaning the rye was grown at the distillery. Only a handful of new, charred American oak barrels are filled each year with the 100% rye distillate, then allowed to rest for six years. Packaged at 93°, a 750ml bottle runs $54.99.

Appearance: The Estate Rye appeared as an orange amber in my Glencairn glass. A fragile rim released fat tears that inched their way back to the pool.

Nose: Rich oak notes wafted out of the glass, and the rye spice smelled mellowed. Mint and stone fruits combined with vanilla and a bit of menthol. When I inhaled through my mouth, mint, and vanilla were evident.

Palate:  The mouthfeel was oily and coated my tongue. Honey, almond, and mandarin oranges were on the front, while the middle consisted of nutmeg and mocha.  The back featured allspice, oak, and clove.

Finish: Medium-to-long in duration, the finish continued with the notes of allspice, oak, and clove from the back of my palate.

Bottle, Bar, or Bust:  The flavors in the Estate Rye were not shy, they were easy to pick out, and none overwhelmed another. I found this whiskey to be well-balanced, enjoyable, and very much a classic Rye. Considering its age and limited quantity, I believe the price is at the very least fair. Crater Lake Spirits could charge another $10 and still be reasonable, and I’m happy to crown my Bottle rating for it. 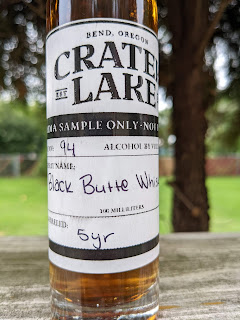 Black Butte Whiskey is an outlier as an American Single Malt versus the others being Ryes. It is also a collaboration whiskey, where the folks at Crater Lake distilled Black Butte Porter before placing it in #4-charred, new American oak, where it sat for five years. You can expect to pay about $74.99 for a 94°, 750ml package.

Appearance: Black Butte Whiskey was the color of burnt umber, leaving a thick rim on the wall of my Glencairn glass. Sticky droplets remained, taking several minutes to collapse.

Nose:  A gorgeous nose always concerns me, and Black Butte has one. Mocha and old leather rose from the glass’s chimney, and I just kept sniffing, relishing the moment. Green apple kissed my nostrils. Mocha rolled across my tongue when I drew that vapor into my mouth.

Palate:  A creamy mouthfeel helped erase whatever worries I had from the nose. At the front, I discovered chocolate, nutmeg, and vanilla. The middle featured almond, leather, and tobacco leaf, while the back released mocha, toasted marshmallow, and oak.

Finish: Rich mocha, marshmallow, old leather, and charred oak hung around for what seemed to be forever, and I wasn’t complaining.

Bottle, Bar, or Bust:  I’m not a beer drinker, and I don’t know if this whiskey represents what a Porter offers, but I believe I’ve fallen in love with Black Butte Whiskey. I don’t care what it costs, this is one you don’t want to pass up given the opportunity, and that’s a slam-dunk Bottle rating. 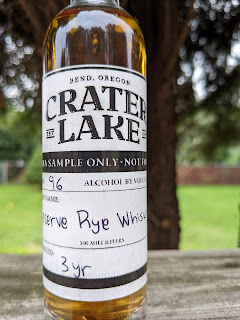 The final pour is Crater Lake Reserve Rye Whiskey. It starts with a mash of 95% rye and 5% malted barley, which is a bit more classic than the 100% rye mashbills this distillery has offered so far. It aged in new, charred American oak for three years and weighs in at 96°, making it the heavyweight of the four. A 750ml bottle will set you back $39.99.

Nose: Vanilla, mint, and oak joined a smell of rye spice. When I pulled the air into my mouth, it was as if a vanilla bomb had exploded in my mouth.

Palate:  A creamy, weighty mouthfeel introduced my palate to more vanilla and milk chocolate. Rye spice, toffee, and cinnamon formed the middle. The back had flavors of oak, black pepper, and tobacco leaf.

Finish:  My tongue was left with a tingly feeling as the spices lingered for what seemed to be eons. Tannins, black pepper, and rye spice each took a turn.

Bottle, Bar, or Bust:  The more familiar mashbill was enjoyable and easy to drink. I could encounter more of what this whiskey had to offer with the higher proof. It is only three years old, but it tastes more mature. This one is priced right, and this is a classic Rye whiskey that I’m sure you won’t have a second’s worth of buyer’s remorse. I’m giving Reserve Rye Whiskey a Bottle rating.

Epilogue:  If I were staring at all four of these on the shelf and wondering which to grab, it would be a no-brainer. The Black Butte Whiskey takes Best in Show. But the two older ryes are great pick-ups, too, and you won’t complain about the price. Cheers!