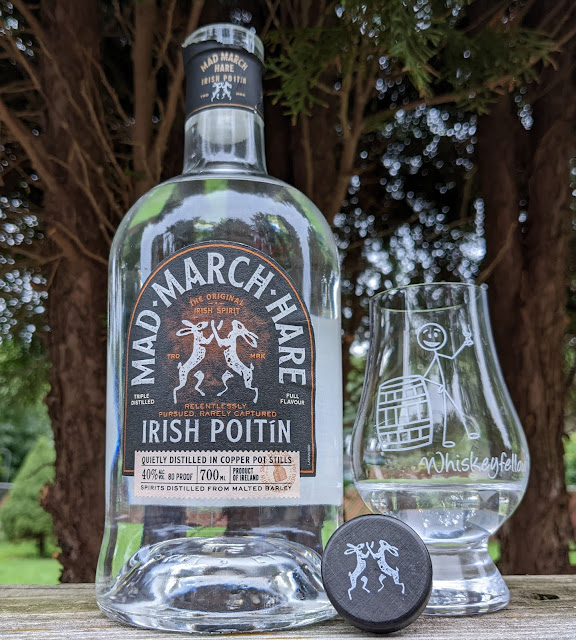 Even experienced whiskey drinkers run into something new. I’ve always heard about Poitín but never had an opportunity to try it. Today that changes.

I’m sure the big question is, “What is Poitín?” It certainly was for me. Poitín has been around much longer than whiskey. The first recorded instances were in the 6th century! Always created in a single pot still, Poitín is kind of like vodka or sort of like moonshine, but neither. It is made from potatoes, cereal grains, sugar beets, whey, or molasses.

Throughout its history, Poitín has been on-again, off-again legal to make. Parliament only made it illegal in 1661 because it was too difficult to collect taxes. Any illicit pot still hidden on an Irish farm could be used to make Poitín, and of course, the underground network of friends and relatives kept the liquid flowing.

A little over 300 years later, in 1997, Poitín was once again legal to produce. Distilled between 40% and 90% ABV (that’s 80° to 180°), Poitín is a geographically-protected class of spirits that must come from Ireland. It is also considered a specialty drink, not one that’s overly common for bars to stock.

Today I’m sampling Mad March Hare Irish Poitín. This one is not only legal but available in the United States. Like most Irish whiskey, it is triple-distilled in copper pot stills. It is bottled at 40% ABV, and a 700ml package has a suggested price of $29.99.

“Mad March Hare uses only the best, locally sourced, malted barley. As you would expect, fine Irish Poitín needs fine ingredients, and most of our suppliers are farmers within a couple of miles of our stills, with equally rich histories in the growing of this key ingredient. As one would expect, their covert deliveries are made in the dead of night.” – Mad March Hare Irish Poitín

I’m ready to hit up a real #DrinkCurious adventure here, not knowing what I’m even getting into aside from what I’ve researched. But, before I do, I must thank Mad March Hare Irish Poitín for providing me a sample in exchange for a no-strings-attached, honest review.

Appearance: This is an unaged spirit and is clear, similar to water. A thicker rim led to syrupy legs.

Nose: As soon as I popped the cork, this spirit’s aroma flowed from the bottle’s neck. I didn’t get the expected buttered popcorn that is typical of moonshine. There’s a lesson in assumptions! Instead, I smelled something like Sierra Mist but heavier than that. Also present were grass, berries, and limestone. The grassy note performed a stepdance across my tongue when I pulled the vapor past my lips.

Palate: This spirit’s texture was different. It was thicker than any whiskey’s mouthfeel I’d ever experienced, almost like a milkshake without the cold. The front of my palate plucked limestone and lemongrass, while the middle offered malted barley. The back tasted of pineapple and honeysuckle.

Finish:  I found the limestone quality stuck around the longest; by that, I mean many minutes. The honeysuckle and lemongrass fell off sooner but left behind a slight black pepper flavor.

Bottle, Bar, or Bust:  If I were to base my opinion on the first sip, I wouldn’t have taken a second. That’s the number one mistake folks make when trying something new. Palate shock is a real thing. You must allow your palate to get used to what’s in your mouth. Once something harsh is expected, your palate can figure out what’s underneath it.

The more I sipped Mad March Hare, the easier it was to drink, and I began to enjoy the experience. It began to get addictive. As heavy as the flavors were, I don’t think increasing the proof would do much more than getting you plastered.  I can appreciate how Poitín was so popular. I also understand why some people wouldn’t like it because it is so unusual.

I’m happy to have Mad March Hare in my whiskey library, and this was a fascinating and fun experience. It is tasty and affordable. An honest rating on this must tip it into the Bar category, but only because of how divisive it will be; it really needs to be sampled first. In the meantime, I'm looking forward to further exploring this unique Irish spirit. Cheers!