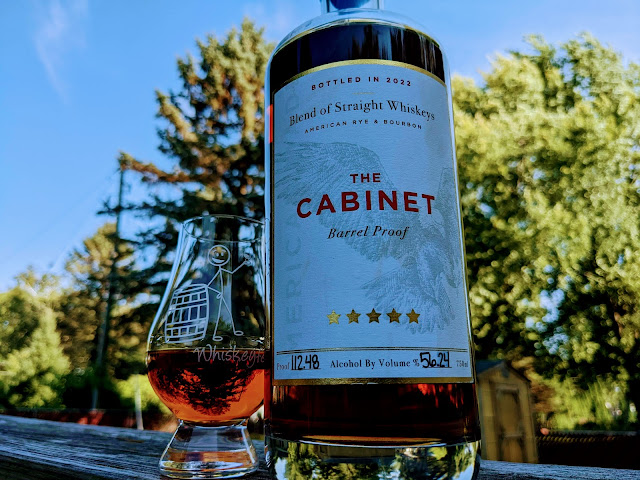 Proof & Wood Ventures is a company that brands itself as Purveyors and Blenders of American and Global Spirits. Founded by Dave Schmier, Proof & Wood takes what it considers only the best barrels and tries to improve upon them. That's a heck of a task many have tried, yet few succeeded. Proof & Wood usually nails it.

I’m sure most of us have seen the DC Collection of whiskeys from Proof & Wood. They come with labels such as The Ambassador, The President, The Representative, The Senator, and The Justice. It stands to reason that it would run out of names at some point. Before that happens, let me introduce you to The Cabinet.

The Cabinet comes in a 750ml package and has a suggested price of about $110, which enters another echelon of whiskey quality. So, before I get to the #DrinkCurious thing, allow me to thank Proof & Wood for a sample in exchange for a no-strings-attached, honest review. Let’s sip this and see how it is.

Nose: Nutmeg, cinnamon, caramel, and maple syrup provide a sweet-spicy combination to my olfactory sense. Thick caramel rolled across my tongue as I sucked the air past my lips.

Palate: An oily – make that very oily - mouthfeel carried less weight than I would have guessed. It was almost airy. Perhaps that’s purposeful to mimic the various stances of the members of a cabinet. The front of my palate encountered nutmeg, rye spice, and pome fruit, while the middle found dark chocolate, caramel, and nuts. The back featured charred oak, cinnamon, and clove.

Finish:  Dark chocolate, charred oak, rye spice, and cinnamon began mild but started building and warming as time progressed, similar to a heated political discussion. The crescendo took about a minute, ending with black pepper and a nutty quality.

Bottle, Bar, or Bust:  The Cabinet is a complicated marriage of Bourbon and Ryes, but one that is thought-provoking and worthy of consideration.  There is no compromise here with my Bottle rating. It is one that I’m thrilled to have in my whiskey library. Cheers!