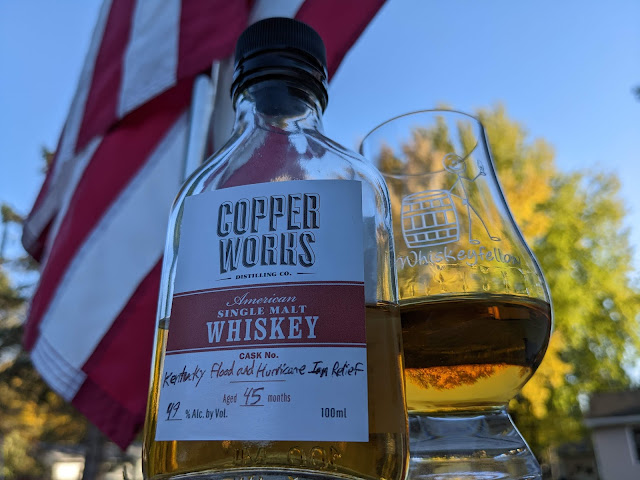 Throughout my existence, I’ve learned that being a good citizen is essential to having a fulfilling life. I’ve donated my time to emcee whiskey events; I created the #30DaysofBourbon Challenge and turned it into a fundraising effort, encouraging others to send thousands of dollars to people’s favorite charities. I donate whiskey bottles for various events (whiskey-related or not) in hopes they will do some good for someone in need. The local rescue where Mrs. Whiskeyfellow and I adopted Cinder is another recipient of my monies.

The point is I give time and money when I can. And when someone else is trying to help make the world a better place, I applaud it.

This past year has seen brutal weather events that displaced millions of people. Two areas, in particular, were walloped: Kentucky with its flooding and Florida with Hurricane Ian. There are so many that insurance won’t help, and having to wait months or longer for financial aid from the government is difficult.

“Without question, our team agreed that another very important whiskey release was in order. Last December, following the devasting tornadoes in Western Kentucky, we created a special benefit release. Inspired by that relief effort and with the groundwork already laid, we began preparing a new American Single Malt Whiskey, proceeds from which would be donated to support flood relief efforts in Kentucky.” – Jason Parker, Co-Owner and President
“As we were preparing to bottle and announce our flood benefit release, Hurricane Ian swept through Florida and several other Southern states. We decided immediately to extend the release to support both regions impacted by these natural disasters.” – Jeff Kanof, Co-Owner and Vice President

These offerings contain the same American Single Malt whiskey; only the labels differ. The distillate was aged in two former Bourbon barrels and one new American oak cask. Of the ex-Bourbon barrels, one was filled with pale malt and matured for over 5-1/2 years; the other contained a rare single varietal barley called Alba. That one rested for 6-1/2 years. The new cask had pale malt and was aged 45 months, hence its age statement.

Once blended, this whiskey was bottled at 49% ABV (98°). The price of either is $89.99 plus shipping and can be obtained from the distillery or its online store.

I’m going to do something a bit different here. I will not rate this whiskey due to the lack of a value assessment. I will, however, provide my tasting notes and let you know what I think. It will, as always, be my honest review, and before I #DrinkCurious to discover what sipping this whiskey is like, I thank Copperworks for providing me with a sample.

Nose: A fruity bouquet of peach, apple, pear, and citrus reached up and out of the glass. There was no evidence of wood, new or vintage that I could discern. Peaches and cream tangoed across my tongue when I pulled the air into my mouth.

Palate:  A thick, creamy mouthfeel coated everywhere. The theme honed in on fruits. Peach dominated the front of my palate. I had to wait for the middle before other flavors could be tasted. Almond butter, apple, and powdered cinnamon took center stage, while honey, graham cracker, and toasted oak formed the back.

Finish:  Hey, look! It’s a freight train! A finish of peach and apple pie filling just kept rolling. But it was joined by oak tannins and a touch of black pepper.

Bottle, Bar, or Bust:  I said I would not rate this whiskey. I stand by that. But if you were to purchase a bottle (or more) of this charity American Single Malt, I promise you won’t be disappointed. Peach is not a note I actively seek out, yet I enjoyed the heck out of this pour.

Copperworks is a distillery I’ve found impressive, and the charity bottle only solidifies that opinion. Cheers!