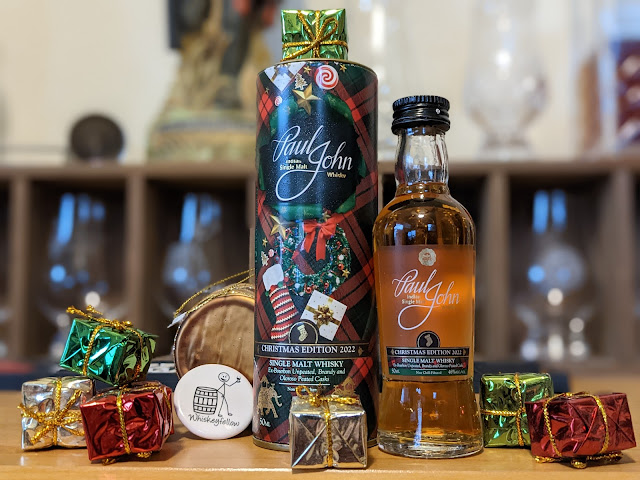 Christmas Edition is Paul John Whisky’s annual year-end release. It also serves as a prelude to what the distillery has up its sleeve for the subsequent year. As you can imagine, some are better than others, with my favorite to date being the 2020 release.

But what, exactly, is Paul John? It is a product of John’s Distilleries, the maker of the world’s sixth-largest whisky brand: Original Choice Whisky. John’s Distilleries was founded in 1996 and is partly owned by Sazerac. Paul John is its Single Malt brand, one of the three major well-known Indian labels, along with Amrut and Rampur.

The distillery is located in Goa, India, in the western part of the nation. The average temperature in Goa is the high 80s to low 90s (Fahrenheit), which translates to a naturally-accelerated aging environment. It is suggested that there is a 3:1 ratio compared to Scottish or Irish counterparts.

Six-row Indian barley is utilized, which is said to have a higher protein and fiber content. It leads to an oilier whiskey than two-grain barley. Any peat that Paul John uses is sourced from Islay and the Highland regions of Scotland. Fermentation takes 40 hours or longer before the mash is distilled through its copper pot stills.

The 2022 release is familiar in many ways to the previous editions: it carries no age statement, is non-chill filtered, and weighs in at 46% ABV (92°). And what’s similarly different is the cooperages used. This year, the unpeated component aged in ex-Bourbon barrels and brandy casks, while the peated matured in Oloroso sherry butts. It has a suggested price of $79.99. While Christmas Edition is a limited-edition whisky, my experience with the previous releases is that it isn’t overly challenging to find, even for several months beyond Christmas.

Before I get to the always exciting #DrinkCurious part of the review, I must thank Paul John for providing me with a sample in exchange for a no-strings-attached, honest review.

Appearance: A neat pour in my Glencairn glass suggested a chestnut-colored whisky that created a thick rim and syrupy legs that fell back down to the pool.

Nose: Lovely smells of molasses, cinnamon, fig, apple, pear, nutmeg, almond, and oak encouraged me to sniff as I attempted to find every available note. It made my mouth water, and when I breathed in that vapor through my lips, I tasted warm brandy and fig.

Palate: I encountered a full-bodied, oily texture, with flavors of dark chocolate, plum, and candied nuts greeting the front of my palate. Fig, orange zest and butterscotch tantalized my mid-palate, while soft, earthy peat, cinnamon, and oak formed the back.

Bottle, Bar, or Bust: Christmas Edition 2022 is another grand-slam home run. The attractive color, the complex aroma, the sweet and savory palate, and the slightly spicy finish were magical, just like Christmastime. If I had to find a fault, it would be the length of the finish. I wish it were longer. I loved this whisky, and I believe you will, too. It has earned every bit of my Bottle rating. Cheers!