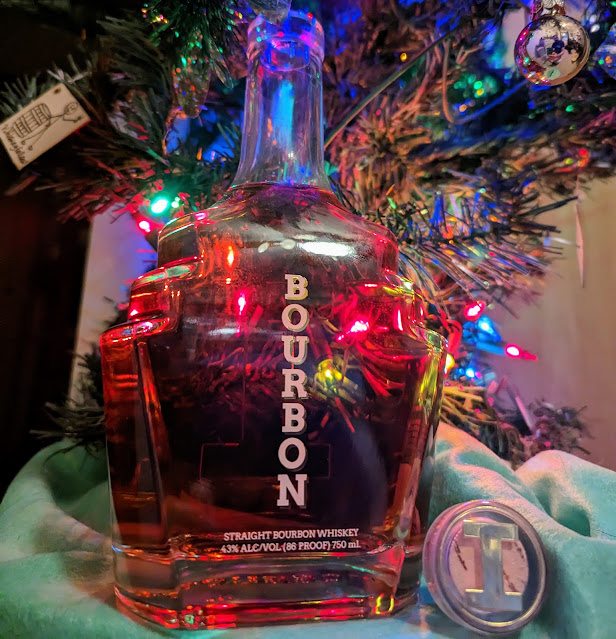 True or not, I love whiskey backstories. The most believable tend to come from Scotland, while the tallest tales are American. Perhaps it is my fondness of folklore, my admiration for Samuel Clemens, and my value of creativity. And, no matter how fascinating the background, it and how a whiskey tastes are separated into two distinct universes.

Today, I’m exploring I Bourbon, which has aggressively hit my social media feeds. I’d never heard of it, but I always am on the prowl for something new, so I reached out to the company to learn more.

“When I set out to start my own business, my goal was to create a bourbon for everyone. I wanted to create a bourbon so special – but also, so accessible – that you could enjoy it neat, on the rocks, or in your favorite whiskey cocktail. The concept of ‘I Bourbon’ was born! I hope you enjoy it. This is I Bourbon, and it’s yours.®” – Tripp Whitbeck, Founder

Tripp was a lawyer, a political consultant, and a corporate salesperson. But, since his childhood, Tripp has always been intrigued by complex smells and flavors. He wanted to get involved in craft spirits and became a TAM (Techniques of Alcohol Management) certified bartender to learn as much as he could about the trade. Finally, in 2019, he ditched everything and dove head-first into creating his own company.

Tripp’s story is interesting (and believable). When he and I spoke, he explained that he came up with the blending profile in his living room. His living room? If you’re like me, you immediately picture him with hoards of samples, bottles everywhere, and scientific equipment. But that’s not what happened. Instead, he had little sample bottles from distilleries around the country, and he added a little bit of this whiskey to a little bit of that until he was satisfied. He said this process took a few weeks before I Bourbon was born.

The components of I Bourbon all come from Tennessee. He started with a 13-year Bourbon, and while he felt it was delicious, it didn’t fit his goal of creating a Bourbon for everyone. He added 5- and 6-year Tennessee components before things came together. Tripp doesn’t disclose what distilleries he sourced from, but he states it is a high-corn mash that includes rye and malted barley bottled at 43% ABV (86°). I Bourbon is labeled as straight, meaning what’s inside is unadulterated by additional ingredients.

The packaging is gorgeous and different from most anything else on the store shelf. It has plenty of embossing, with a giant “I” on the back and written BOURBON vertically on the front. The stopper is clear acrylic with a synthetic cork and a gold “I” on the top. BOURBON is even embossed on the punt.

I Bourbon is sold in nine states and can be shipped to 41. Tripp indicated the suggested retail price is $59.99, and that’s what he sells it for on his website. Tripp indicated he envisions I Gin, I Vodka, I Rum, and other “universal” spirits in his wheelhouse.

Before I #DrinkCurious, I must thank Tripp for providing me with this sample in exchange for a no-strings-attached, honest review. Let’s taste how Tripp did…

Appearance: A neat pour in my Glencairn glass revealed a Bourbon with a deep golden hue. A thinner rim released syrupy legs that crawled back to the pool of liquid sunshine.

Nose: The telltale smell of Flinstone’s vitamins forces me to suspect at least one component comes from Dickel. Plum, nuts, honeysuckle, and cherry blossoms had to be coaxed from beneath. When I pulled the aroma into my mouth, a wave of vanilla rolled through.

Palate: The mouthfeel could best be described as silky but weighty. On the front of my palate, I discovered big, bold vanilla offset by a tinge of butterscotch. The middle was more transitionary between the front and back and didn’t offer anything identifiable. It led to oak, nutmeg, and rye spice.

Bottle, Bar, or Bust: While the nose screamed minerality, it never materialized in my mouth. Instead, sweet notes commanded attention, balanced by spicy flavors. There was no ethanol burn; what heat exists comes from those spices. I Bourbon is an easy sipper that lacks anything people who claim they don’t like whiskey would find unappealing. And that’s the consumer Tripp has targeted.

I Bourbon can be a tremendous toe-dipping opportunity for those who don’t indulge in neat pours. The subtle spices should lend depth to a whiskey-forward cocktail. The more experienced palate will long for something more profound than what I Bourbon provides. I Bourbon is a nice pour, but there’s also something missing. Personally, I wish it possessed a few more proof points.

Regarding the value statement, I understand how expensive it is to launch a new brand, particularly when you put forward such a beautiful package. The eye candy is nice but what counts is what’s inside. I Bourbon isn’t bad; far from it. But I can’t see myself spending $60.00 on it. As such, I Bourbon takes my Bar rating. You’ll want to try this one first. Cheers!