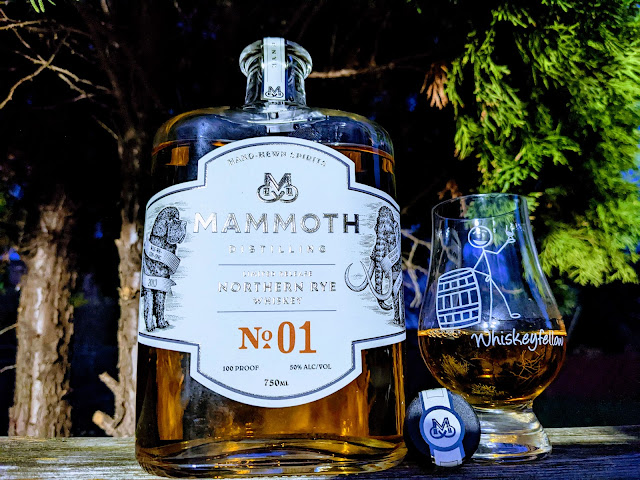 If you’re familiar with Rosen rye, you know it was once the dominant strain grown for Pennsylvania-style Rye whiskey. Michter’s had been using it since the 1950s. Unfortunately, after the 1970s, the Rosen varietal lost its uniqueness as it slowly crossbred with other strains and eventually disappeared.

There has been renewed interest in reviving the Rosen varietal. There is something called The Rosen Project designed to do precisely that. Michigan’s South Manitou Island is where the action is, with seeds procured from the USDA seed bank in Colorado, bred by the Michigan State University Bio Agriculture Research Center, and then certified by the Michigan Crop Improvement Association.

Mammoth Distilling is at the forefront of this movement, planting and harvesting the grain on National Park Service land (legally, of course). The distillery is located in Central Lake, Michigan, a village of fewer than 1000 residents. It was founded in 2013 by the husband-wife team of Chad Munger and Tracy Hickman.

“As you may know, Mammoth is obsessed with rye. Maybe it’s because we identify with the scrappy, hardscrabble grain that thrives in frigid weather or maybe because it’s the most characterful of American whiskey grains. Regardless, we think rye is where the action is – where innovation and experimentation are more welcomed than in the relatively traditional and constrained world of bourbon.” – Ari Sussman, distiller at Mammoth Distilling

Northern Rye No. 01 is the brainchild of Collin Goddard, the head distiller, and Phil Attee, the spirits developer, distiller, and blender. It is a marriage of 14% Straight Michigan Wheeler Rye that matured in new, #3- and #4-charred Minnesota and Missouri white oak barrels and 86% 15-, 16-, and 17-year-old Canadian Ryes aged in second- and third-fill American oak. The blending was done in tiny batches, and French oak staves were included in this process.

The choices from top to bottom were not random. Wheeler rye is a locally-grown varietal known for minimal yields and is one of the spiciest varietals available. Minnesota oak has a tight grain pattern and more tannins, while Missouri oak is higher in lactones. The Canadian distillery is undisclosed, but it is stated to be one from Alberta, which is home to eight working distilleries.

Northern Rye No. 01, at least on paper, reads quite unique, which excites me. I thank Mammoth Distilling for providing me with a sample of this whiskey in exchange for a no-strings-attached, honest review. Now, let’s #DrinkCurious and determine if it lives up to the promise.

Appearance: A neat pour in my Glencairn glass revealed a golden amber, which created a husky rim. Sticky tears almost refused to drop back down to the pool and instead hovered about halfway between the rim and liquid.

Nose: A bold aroma of apples and pears almost drowned out the mint and ginger notes. A dusting of cinnamon and butter hid beneath those. It was as if the smells were built one at a time and then layered on top of the previous. When I pulled the air into my mouth, peaches and cream rolled across my tongue.

Palate:  Flavors came from everywhere, and there wasn’t really a front, middle, or back. The tastes of nutmeg, cocoa powder, apple, pear, vanilla, brown sugar, dry oak, cinnamon, leather, and clove attacked me all at once. It took many sips to nail things down. The mouthfeel, however, was straightforward: It was oily and thin.

Finish:  Initially, I thought the finish was shorter. However, while pondering that, I noticed the spicy notes, notably the clove, remained and kept hanging onto my tongue, which went on for several minutes.

Bottle, Bar, or Bust:  Before I began this tasting journey, I stated that Northern Rye No. 01 looked unique on paper. It followed through on that promise, offering me one of the most unusual palate experiences I’ve encountered. If you’re a fan of Rye, you’re going to go crazy here. If you’re not big into Rye, this may be the one that grabs your interest. I enjoyed every bit of this whiskey; I would describe it as entertaining. Northern Rye No. 01 earns every bit of its Bottle rating. Cheers!