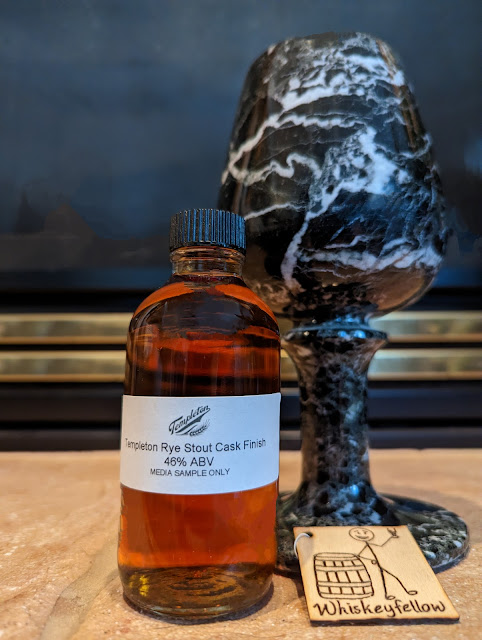 Templeton Rye. If you had asked me a handful of years ago, I would have stated, ‘Nuff said. The statement had nothing in the world to do with how the quality of the whiskey it produced. In 2014, the brand had some legal snafus that I won’t rehash. The brand has since been sold and acquired by Infinium Spirits, and I’m satisfied that the subject of those claims has since been remedied.

Templeton Rye is located in Templeton, Iowa, a tiny town outside Carroll. I’ve been to Carroll many times. I’ve visited the distillery they built in 2018, which is a gorgeous, modern facility. Part of their tour involves going through its famous bootlegging history. They’ve put a lot of money and effort into the presentation, which is well worth a visit. I was stunned by how creative those bootleggers of the day were (and how the entire town was in on fooling the revenuers).

For the last four years, Templeton has released a Barrel Finish Series. As the name implies, the distillery takes its signature rye whiskey and finishes it in various vintage barrels. For 2022, it is the Stout Cask Finish, which involved taking its six-year 95% rye/5% malted barley whiskey sourced from MGP of Indiana (now called Ross & Squibb), and then placed in Imperial stout barrels for an additional three months.

“This year, our Stout Cask Finish expression provides a fresh perspective and has proven disruptive within our Barrel Finish Series, mixing subtle coffee tones with rye pepper and spice. This new-to-market release is sure to elevate any classic cocktail.” – Blair Woodall, Senior Vice President/General Manager

I don’t partake in beer, and I describe myself as beer-stupid. Any mention of beer-influenced whiskey requires me to research. According to draftmag.com:

“Imperial stout, widely known as Russian imperial stout, is a strong and rich dark beer. Enthusiasts call this beer a history lesson in a bottle because there’s a rather interesting story behind the imperial stout. […] The story behind imperial stouts is usually traced back to a request made by Peter the Great. In 1698, when Peter the Great visited England from Russia, he is said to have tasted a black beverage called stout. He liked it so much that he had some sent to the court after returning to Russia.

However, the brewers realized that the stout was getting damaged during the journey, so they added more hops and alcohol to keep it fresh. The exact stout that Peter the Great drank in England is not known, but this was the beginning of the emergence of dark beer.”

Stout Cask Finish is bottled at 46% ABV (92°) and is available in limited quantities in both the US and EU. If I took a wild stab in the dark, I’d assume it is easier to obtain in Iowa than anywhere else. The suggested retail is $54.99 for a 750ml package.

Before I get going on the #DrinkCurious thing, I must thank Templeton Rye for providing me with a sample of Stout Cask Finish in exchange for a no-strings-attached, honest review.

Appearance: Poured neat in my Glencairn glass, this whiskey appeared as bold caramel. It formed a thicker rim that generated slow, sticky tears.

Nose: An aroma of chocolate, toasted oak, and malted barley melded with caramel and fig. Cocoa powder stuck to my tongue when I drew that air into my mouth.

Palate: Stout Cask Finish had a rich, creamy texture that coated everywhere. At the front of my palate, I tasted cocoa powder, roasted almond, and vanilla cream. Midway through the sipping experience, I discovered dried figs and apricots, while on the back, there was ginger, dry oak, and roasted coffee.

Bottle, Bar, or Bust:  As I said, I’m not a beer drinker, and as such, I can’t tell you how much Templeton’s Stout Cask Finish reflects what you might expect. However, I can comment on my own experience with this Rye.

Stout Cask Finish carries a decent thump despite being only 92°. By that, I don’t allude to burn or heat. It was potent. I found the blend of cocoa, nut, and ginger spice pleasant. Incidentally, I was at a cousin’s house when I sampled this whiskey; she is a big stout fan.  I let her taste it, and she couldn’t stop talking about how much she savored this.

The $54.99 investment isn’t out of line and is on the lower end for many limited-run American “craft” whiskeys. Taking everything into account, I’m giving Stout Cask Finish my coveted Bottle rating. Cheers!